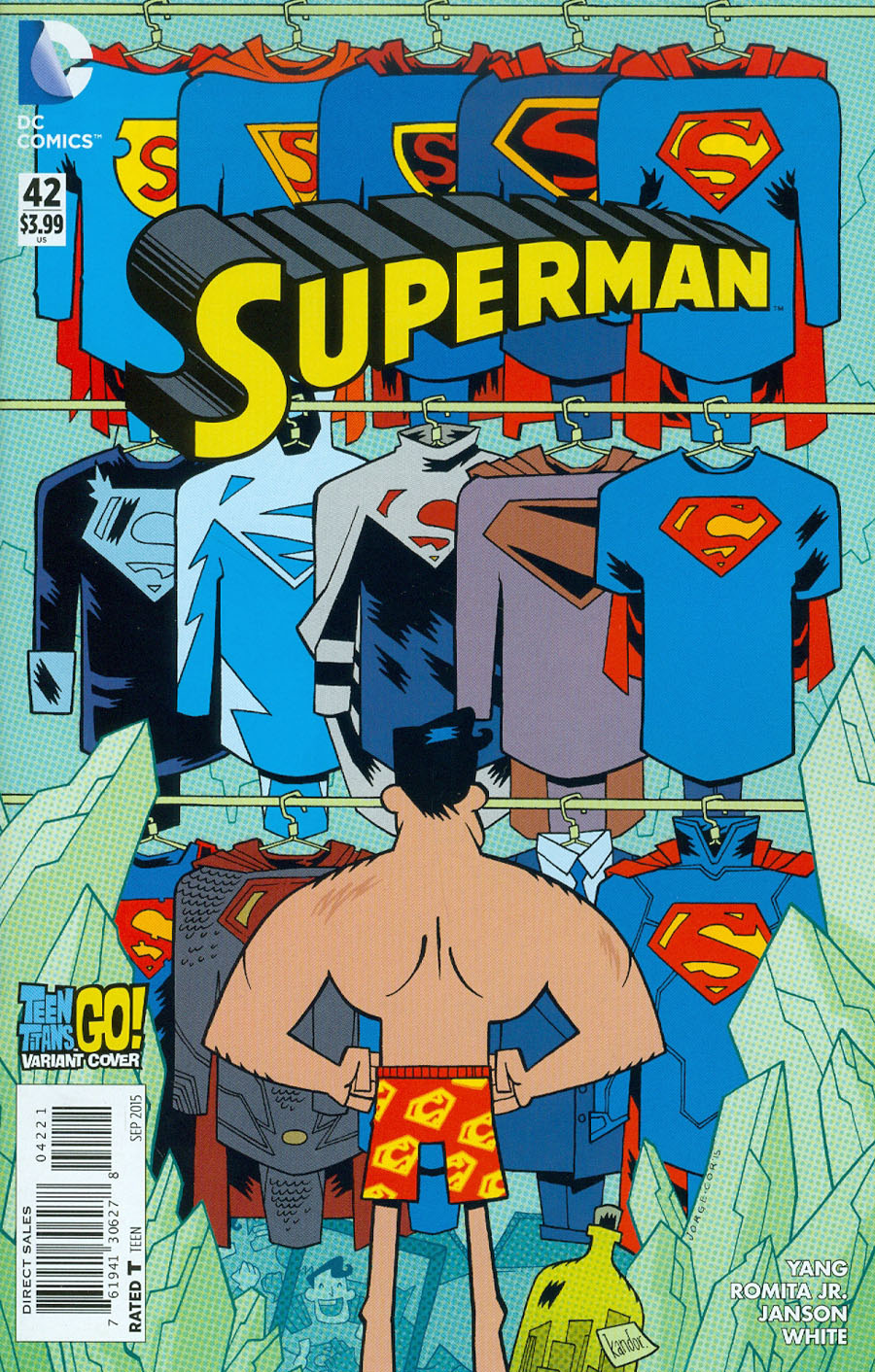 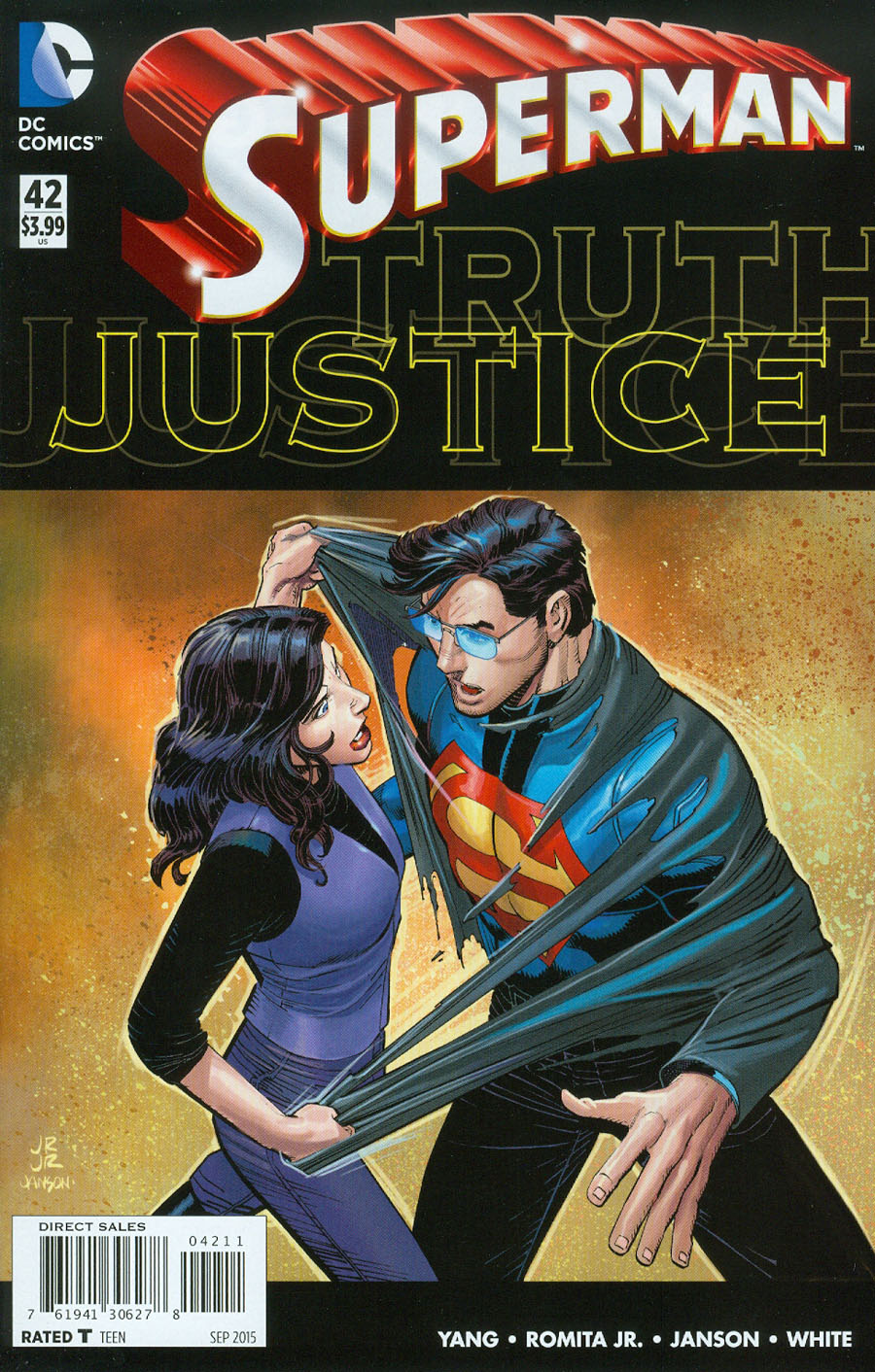 Click to enlarge
Jimmy, Clark, Condesa and Lois have managed to make it to the outskirts of Metropolis.

Clark checks for heartbeats to ensure their safety and Jimmy remarks that if his powers had come back sooner perhaps he wouldn't have gotten shot. Clark brushes it off now that he's fully healed. Condesa interrupts the boys one to one and reveals that the mastermind behind everything is a gang called HORDR, they hoard information and secrets, weapon sales is just a side business. Lois chimes in that Hordr sounds like Lexcorp but Condesa tells her that they are deadlier. They use the information hoarded to either manipulate their victims or sell information to the highest bidder. Condesa looks Clark square in the eyes and says:

"I don't care how powerful you are - you got a big enough secret, Hordr will get to you"

Lois goads Condesa into admitting she only knows all of this because she was in fact an employee of Hordr, this is of course when an army of robo ninjas attack. Instinctively or foolishly, Clark leaps forward and defeats every last one of them. Condesa tells them Hordr has an ally that creates the robo ninjas, they are like zombies made from solidified shadows. She also advises them to run but Lois asks to speak with Clark quietly.

Lois apologizes for her bitchy comments about his cowardice when Condesa was handed over to the fake FBI. Clark stays mostly silent as Lois tells him that because she's been a little obsessed with Superman she noticed that due to his sudden addiction to Solar Flares he's gotten slower, weaker and sloppy. Her worry led her to create a database of Superman's appearances and locations, a pattern began emerging with Clark and Lois points out she noticed Condesa's not so subtle hints that Clark is a 'Big Boy' with a secret.

All this and not to mention the bullet in the gut that vanished and the army of robo ninjas. Lois pulls at Clark's shirt like taffy and reveals Clark's alter ego... Superman!

Lois berates Superman, the symbol of honesty and goodness for secretly being a liar. Clark protests that his life as Clark Kent was the only way he had normalcy in his life, though Lois refuses to believe it. She is further incensed to know Jimmy already shares the secret. Lois points out that Condesa knows and so Hordr and its crime syndicate buddies must also know. Condesa interjects that only herself and her mad genius boss know the secret. His name? Hordr Underscore Root or Hordr_Root, Condesa also tells Clark that H_R is his mysterious text buddy. Condesa also reveals their base is a secret campus but before they go they need technology. Cue Superman leading them to Gotham City to the Toymaster's Gameshop.

Condesa presents Hiro with a mask. After it is coded, the mask acts as an ID pass, Hiro sets to work creating more so Clark, Lois and Jimmy will have one each.

Condesa reveals to Lois and Jimmy how Hordr recruited her in school (think Ward in Agents of Shield) when Hordr started getting threatening, knowing Clark's secret, she sought him out to protect her. Condesa has one other secret... (think the T-X in Terminator 3) she can program a device by speaking code.

The next morning, in downtown Metropolis, a bus pulls up to the sidewalk where Condesa has instructed Lois, Jimmy and Clark to wait. Inside the bus every single passenger is wearing one of the ID masks. Donning their masks, Condesa explains that the bus is a Hordr Bus and a mask is your only way on board. The bus then flies off leading Lois to grab Clark's hand. Clark offers his thanks, nobody but Lois and Jimmy are part of both halves of his life. Lois cuts off the heartfelt moment. She tells him (even though they were never really close, romantic or otherwise) she thought of him as a partner and friend, until now.

Condesa tells them that they have arrived at the base... Hordr_Plex. Upon entering the Plex seems to be peaceful. Jimmy thinks it's great until Condesa tells him that every person, every masked employee is a slave, their service guaranteed in exchange for Hordr's silence with their secrets. If they leave their secrets are exposed. A projection appears in the sky (think Skeletor in the Masters of the Universe movie). H_R addresses the crowds he calls the Hordr_Horde and tells them that three intruders have been detected. Lois, Clark and Jimmy realize they've been led into a trap as Condesa has vanished.

Clark grabs his friends and takes them to a secluded part of the campus. Using x-ray vision Clark scans for Condesa but instead he finds a secret room. They realize they've stumbled on the data center. Zettabytes of information stored on sheets of alien crystal. H_R extends them an offer to join the Horde. Clark declines and H_R threatens to reveal all, not only jeopardizing Clark but in turn anyone he loves will be hurt or killed. Clark rips off his clothes to reveal his costume and springs into action fighting the H_R robots. He yells to Lois and Jimmy to tell the workers to make a run for it while he brings down the complex, its information and H_R in one go.

Jimmy catches Condesa trying to sneak away and after he yells at her for her betrayal, she switches sides again from guilt and offers to help them. H_R stands on a balcony watching Superman battling his armed forces and doesn't notice Lois approach with a metal pipe. Lois brings the pipe down hard on H_R's head revealing him to be just a teenager, worse he was never really there. Lois watches in horror as H_R's holographic body vanishes. Jimmy transmits a message of freedom to the Horde, who disbelieve him at first, but as Superman becomes overwhelmed they race off in the flying buses. Superman solar flares but as he does a shadowy figure appears and drains all his superpowers.

Jimmy and Lois grab Clark and throw him onto a broken door. They drag it to the last waiting holographic bus and escape.

I'm skipping the reveal until the end but let's look at the story without it. Hordr as a concept is actually pretty sound. Watching a target, gathering information, ransoming their servitude. A villain with that kind of power over people can be as deadly as any super powered villain but then you see the flying buses, solid shadow ninjas, the needless cameo of Toymaster, the metal mask ID passes... that's when it all falls apart.

Here's a question for you - you're fighting a villain with an underscore in his name... do you actually SAY underscore?

Story elements just seem to be thrown in like too many ingredients in a recipe. Why shoot Clark in the gut in the last issue climax and completely ignore it this issue? What comes across is that Yang had all these ideas but it becomes truncated to squeeze it all in, nothing feels fleshed out. Some things like Hiro appearing seem to go nowhere and so we go to the reveal...

Lois realizes Clark is Superman and after two pages 'focusing' on it, the Hordr story moves forward full steam ahead and for some reason it felt like it almost didn't matter.

Lois proves she's not just stumbled onto the secret, she's intelligent and she's been keeping tabs on Superman. She notices his addict behavior, she noticed he was acting out of character. The fight with the ninjas (completely irrelevant to plot driving) and Condesa's nudge, nudge, wink, wink hints only reinforced her theory. I am puzzled by her feelings of betrayal. Lois post Flashpoint has done her best to be an acquaintance. She was never part of 'Lane & Kent' - the world famous reporting team, in fact just last issue she went out of her way to force her byline onto Clark & Jimmy's story. She HAS been lied to and she should feel angry, but despite fake FBI agents chasing them, a gang of ninjas, they wait till the next morning, by which point it is no longer discussed. Is Lois seething? Is Jimmy going to speak up? No. Would something like this be brushed to the side? In all honesty, I don't think it would. I think it would have exploded. Lois could and should have reacted but instead hops onto a flying bus.

At this point I am expecting a backlash, but I want to make it clear, the reaction is not fleshed out, the emotion, the drama and tension. Lois points out she's collated data, she has catalogued and cross referenced the data - she knew. That is a revelation. The problem is because of the writing problems in Superman, and a determination to keep Lois and Clark apart, they just don't have the relationship that would warrant this. Right now if Lana and Lois fell out of a plane and Clark had to come to the rescue, he'd pick Lana - my personal opinion.

When I read Superman: Convergence - that was Lois, unfettered by outside forces. This Lois isn't allowed to flourish. It's looking like her reasoning for revealing Clark's secret is more out of bitterness - but we have one more issue before Yang joins the other teams in the current story. I hope I'm wrong.

Art - 3: The art is a complete rollercoaster. JR Jr., just can't seem to find his groove. One issue the story has great splash pages and composition, the next it is a mass of scribbles.

This issue it is on the upside again, but like the script, the art is also very hit and miss. Scale and anatomy are really important.

Cover Art - 2: Is Clark wearing tissue paper? The scale is wrong and physically what Lois is doing and the way she's doing it is impossible.

It is a great emotive moment but I think I prefer the Jurgens/Breeding take.

A complete gimmick of course but I love it.

I enjoyed the nods to his different suits over his careers across mediums. I had fun pinpointing the appearances of every suit.

It's harder than you think without cheating with the internet!