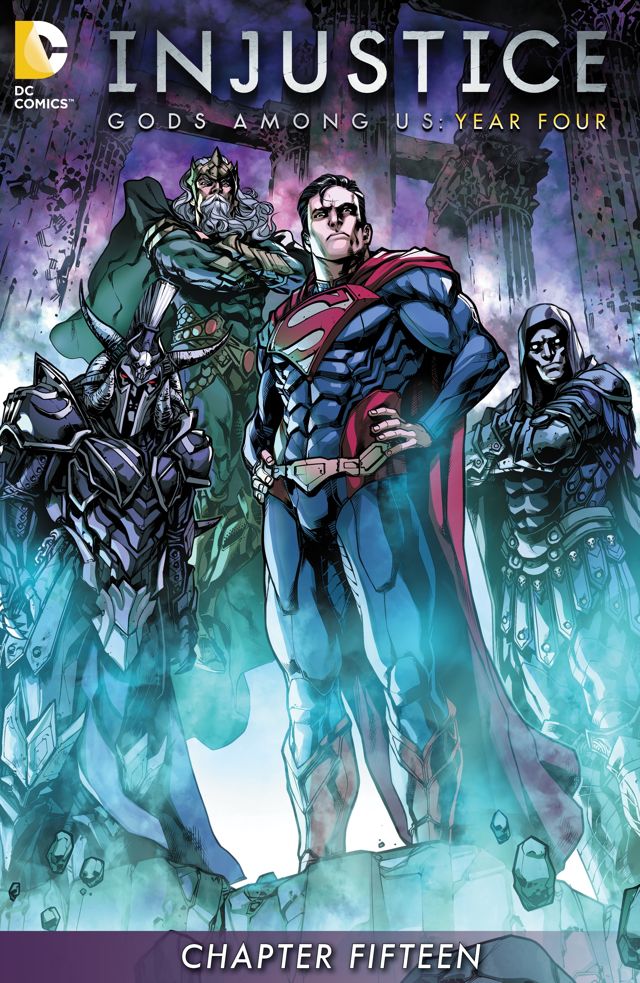 Click to enlarge
Sinestro awakens after being struck by Regime Superman. He races back in time to see Shazam (Billy Batson) stripped of his powers by Zeus. Zeus decrees that Regime must leave or he will take action against the Justice League. Harley Quinn attempts to defend Billy, but is struck down by Zeus and disintegrated. Zeus commands Wonder Woman to stand with the gods, and Regime surrenders. Later, Regime meets with Lex Luthor and Ares, God of War, who wishes to discuss the current situation.

Story - 3: The best thing about this issue was, ironically, that there was no fighting. Zeus brings order to a ridiculously chaotic situation in a carelessly written manner, but at least he ends the slog that Injustice has been for the last 10 issues. It's curious if Buccellato understands how Shazam's abilities are gifted, or if he cares... it would be interesting to know the same of readers. Shazam's abilities are bestowed by the wizard, Shazam (another reason changing his name was such a moronic idea) and while the Greek pantheon makes up the bulk of the powers he receives, he also has two patrons that are not amongst them: Achilles and Solomon, who provide his invulnerability (Courage) and Wisdom, respectively. Shazam should have been thoroughly weakened, but not stripped of all power by Zeus. In truth, he should have been stripped of power by the Wizard, Shazam (again, stupid idea). It would have been interesting to see Shazam combat the Insurgency and Greek pantheon, with only courage and wisdom, but that definitely isn't what Injustice is about, and the irony is thicker than clotted cream. Ares as the maestro of this Year's mishaps doesn't ring true, as these machinations require the finesse of Athena, not the god of war that inspires the lust for battle. The obvious play for Ares is the throne, but why can no other god see this? Actually, why can no other character see this? Oh yes, thanks idiot plot!

Regime Superman has been the biggest victim of character regression in this Year, and it's reduced what enjoyment I was able to gain reading the series. If Regime wanted to end the fight with Wonder Woman, he could have easily flown her to space and left her there until she was unconscious. Freeze breath, speed blitz, etc. We get nada. However, Regime can kill Hercules and then admonish Shazam for not being willing to do the same. We've heard him say over and over, "I'm willing to do whatever it takes!", but that seems to equate to be willing to half-step and be half-arsed until issue 23. Give me a good villain any day, someone who challenges the heroes and makes me want to see him fall. Not this indecisive, moronic excuse for a despot.

Art - 4: The art also benefits from no fighting. The panels of Zeus are particularly striking.

Cover Art - 3: Why is Superman standing about with those he's in contention with?! Can we have a cover that is somewhat representative of what is inside, or must everyone be a didactive reminder of the old adage?