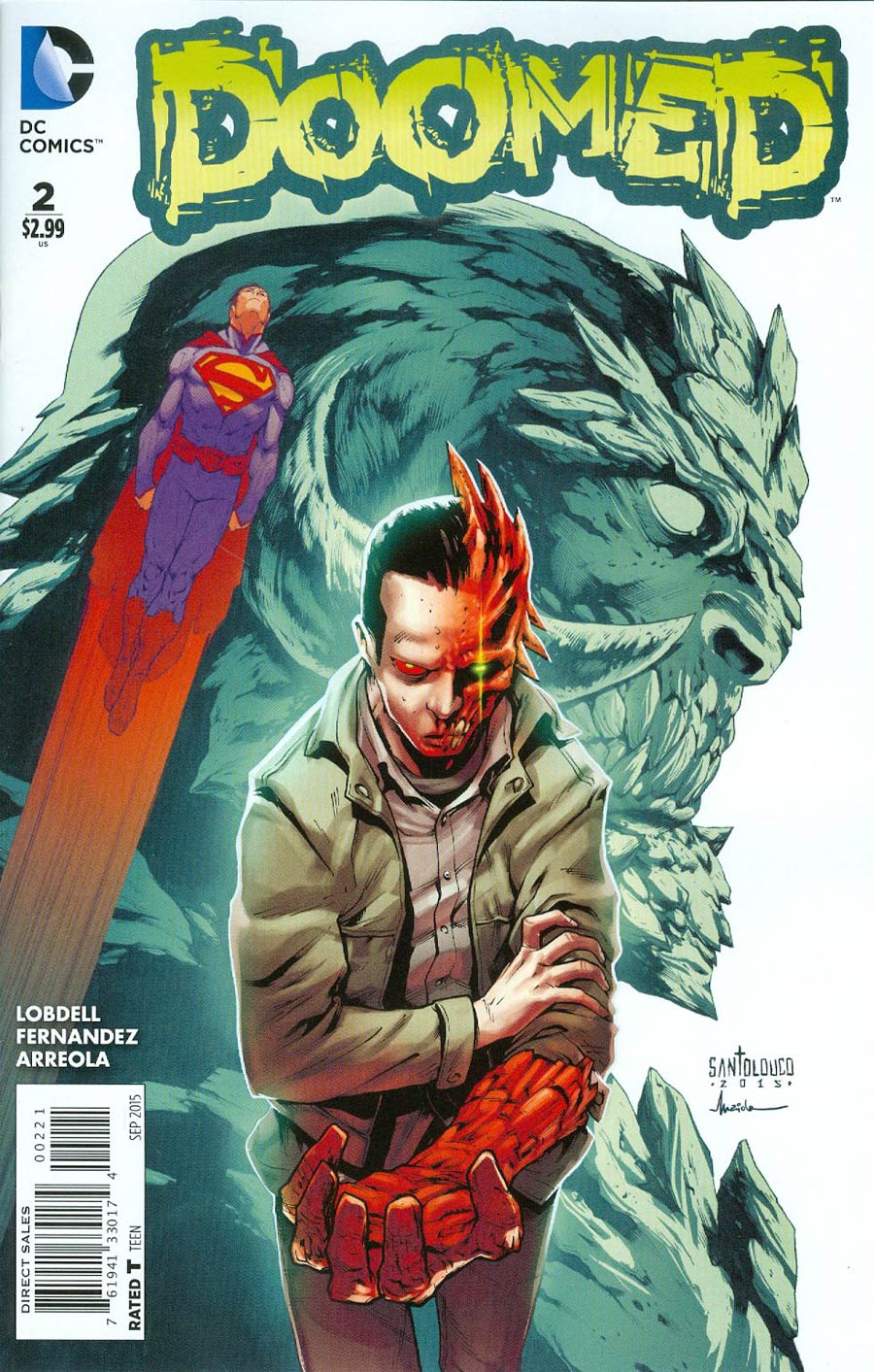 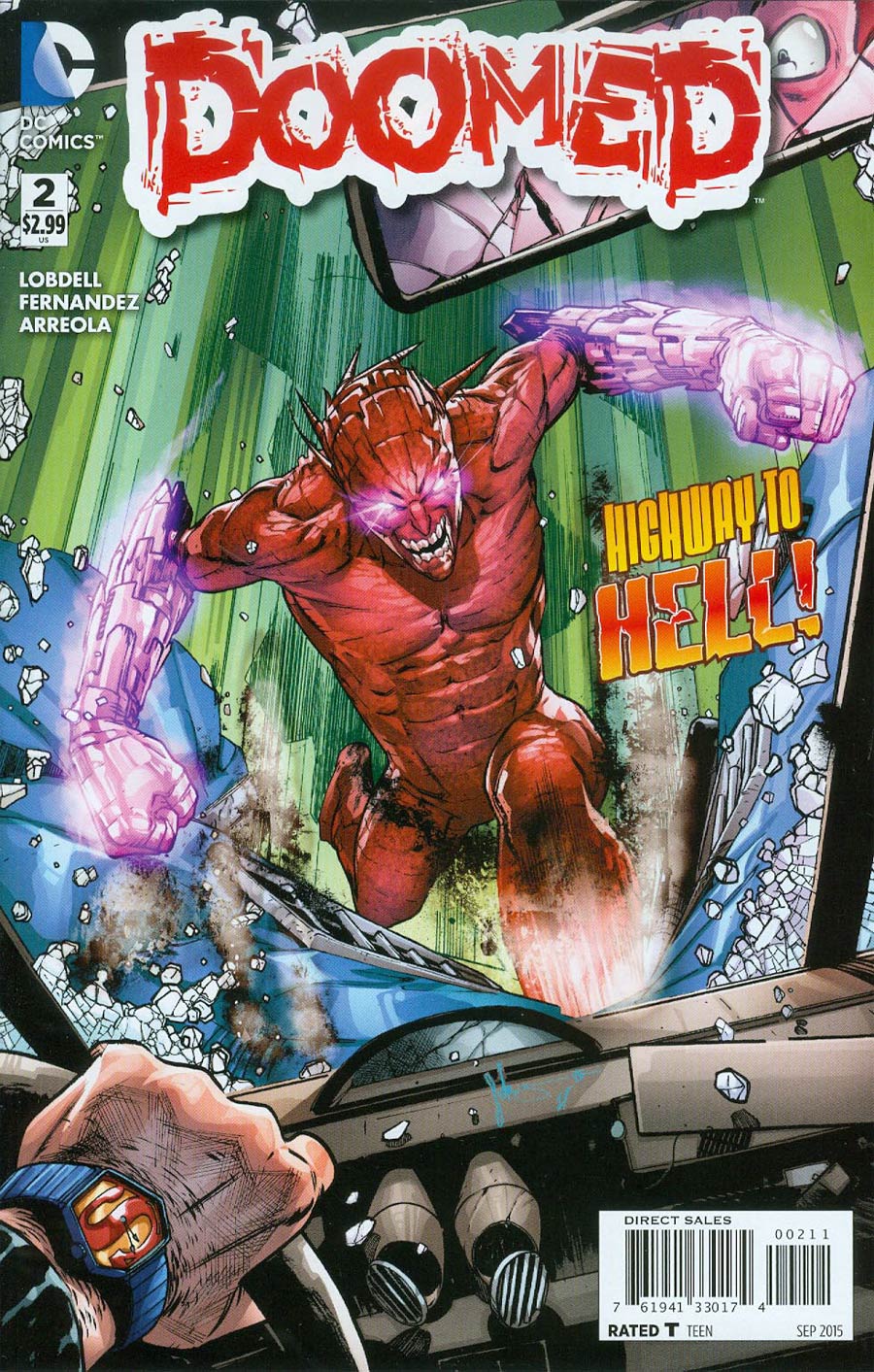 Click to enlarge
In Dak Park Elementary School, Metropolis a young class are in the gym about to play basketball.

The teams are just getting limbered up as Coach Polumbo notices that Miles is sporting an expensive smartwatch and it is then that Miles realizes that his Coach isn't really human.

The smartwatch detected alien DNA, that of a Platharian and so Miles pulls out a ray gun and shoots his Coach.

The laser causes his teacher to explode into a wave of green goop and Miles struts out in front of his now quivering classmates.

Elsewhere, Reiser crawls up from the sewer into the night of Downtown Metropolis still in Red Doomsday mode after his arousal with Clarice in the shower led to him melting out of the showhome deep beneath the city. His memory, in flashbacks, is still fragmented and while he struggles to remember he doesn't realize he's crawled into the path of a bus and it crushes against him like paper before he hurls it away down the street. As the out of service bus catches fire Doomed/Reiser realizes he's hurt the driver and rushes in to help her.

Reiser manages to pull her to safety as the bus explodes, but upon waking she sees his bizarre appearance and cannot hear his human voice. Instead she mistakes his concern for a monstrous growl and screams for help. The police see the bus wreckage and the screaming driver and take aim. Reiser, under threat, emits a centric blast and uses the bright light to escape. While the police are puzzled and arranging clean up, Reiser worries he's made some major mistakes, especially with prospective lover Clarice. Unbeknownst to him, Clarice has watched the entire event from the Showhome.

Reiser/Doomed leaps his way into the local water processing plant and as the sun begins to rise, Reiser begins to revert to his human form. The next morning Reiser returns to his apartment seeking help from his best friend Roman. Roman is being sent secretive orders over his laptop before Reiser crumples at the doorway. Roman slams the laptop shut and lays his friend down on the sofa watching over him with worry.

Meanwhile over in Lex Plaza the police have tracked Doomed/Reiser backwards to beneath the Plaza, mistaking the Centric blast as an explosive device.

The police notice a scuttling noise in the shadows, only to discover Miles sneaking around and he lies that he lost a baseball down the drain.

Miles was secretly tracking Reiser, the police presence only confirms he is on the right track.

Story - 1: It's not truly an issue #2, not thematically, not structurally. It is a shame in fact, that if all the waffle from last issue and this were put together, the resulting combination of those would actually have made it a 4 or 5. Something to think about. The seeds are there, Roman and his secrets, Reiser being a loser, Clark Kent as a neighbor, a job at S.T.A.R. The mess results when it's cobbled together, as it has been here, in a poor fashion. It makes reading this book... difficult. The lack of substance story-wise makes reviewing it doubly so. If literally nothing happens, and the most interesting character is a nerd with a ray gun, how do you explain to a new reader that it's a book they should read?

Miles, wow, I just have no words. The art jumps from 'The Simpsons'-like to genuinely slick. Is Doomed supposed to be goofy and cartoon like? Or monstrous and imposing? The art style makes it incredibly difficult to translate the script. Am I taking the story seriously? Is it a comedy book? Is it a superhero book? This is the artist's style so I can't knock that but I question whether it is suited to the title. After seeing Superman: Doomed, I'm not sure.

Cover Art - 2: Doomed attacking Jimmy Olsen. The action is there, but again like the interior art, and the last issue cover, Doomed as a character, just doesn't seem to know his role. I also can't seem to shake the Mercury (Metal Men) and Groot image from my head. Also, covers that tease a story that doesn't happen inside is a no-no. If the character driving isn't Jimmy, then get rid of his signature watch. If it is the bus driver inside, firstly she's black, second a woman.

Variant Cover - 4: This cover, with a ghostly Doomsday in the background, Superman soaring and a Miles Morales/Peter Parker homage, actually looks FANTASTIC. It actually sells the book to me. I might hate the interior but this cover made me want to read it. Again... something to think about.