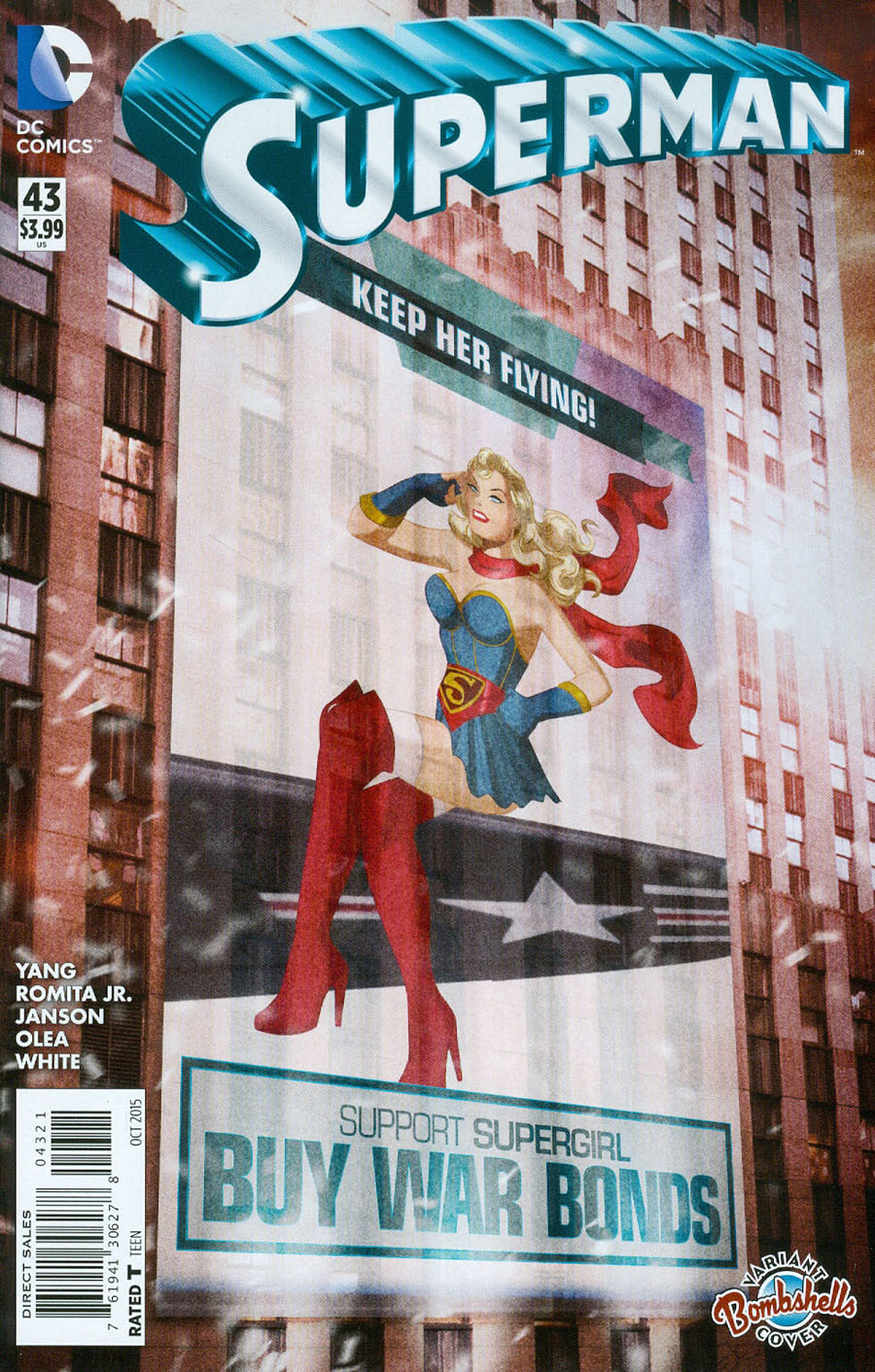 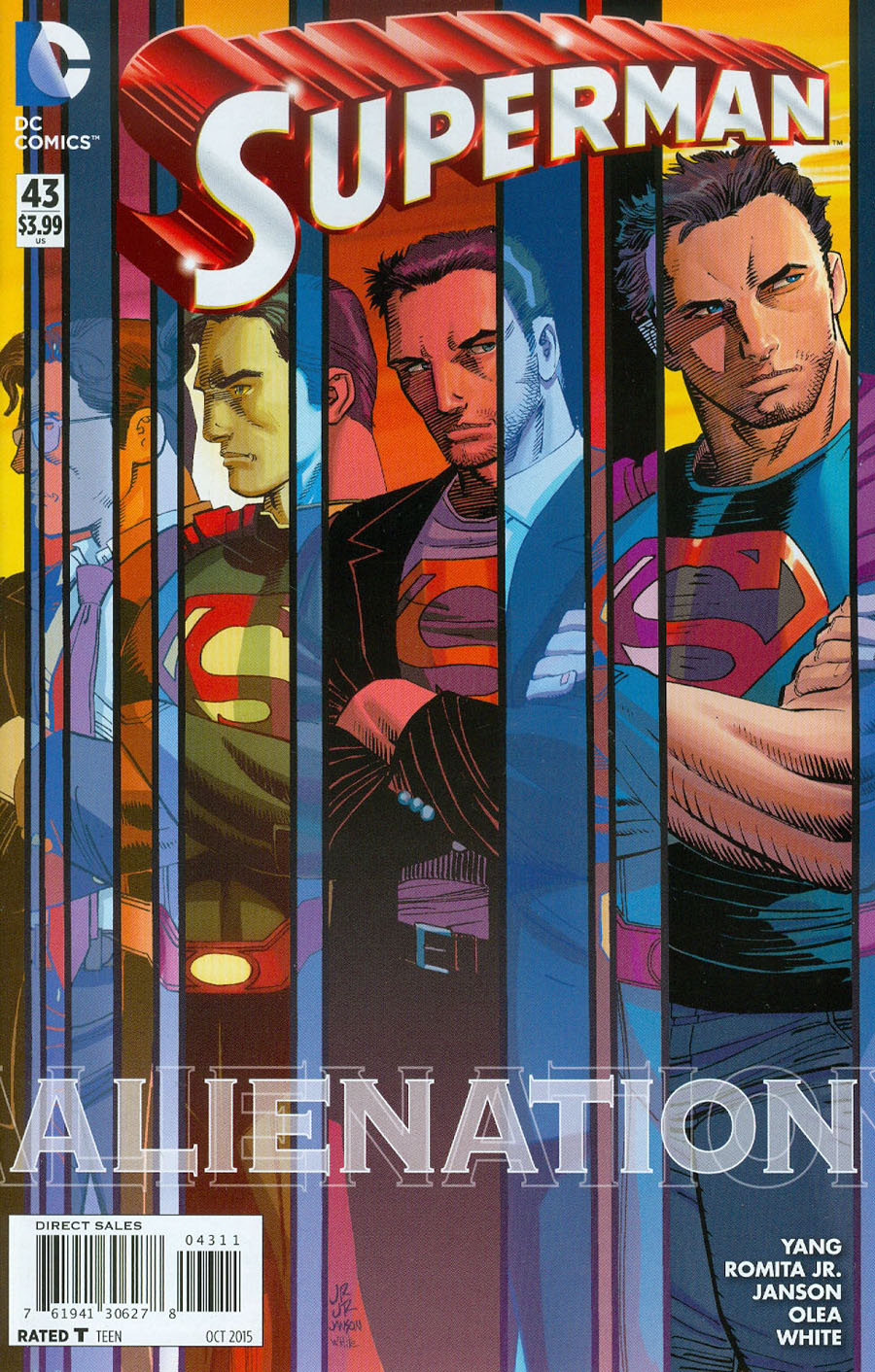 Lois wakes and the bedroom door opens to Jimmy and Condesa.

They recap on how they ended up in the apartment, Condesa comments on Superman's impressive genitals and Jimmy punishes himself for being the most likely leak of information to Hordr_Root. Worse, he's making himself sick so Condesa leads him to the front room while Lois & Clark have some alone time.

Lois instinctively asks a series of questions, several that Clark struggles to answer, when that happens she breaks down and thinks back to Clark's early years and his torturous electrocution at the hands of Lex Luthor & Sam Lane. Lois tells him she would never sacrifice him or his life like that for the truth, Clark, touched, tells her how he is appreciative of their bond across his identities but that they are, and only can be friends with Jonathan and Diana in the equation. Lois smiles that friendship is as equal a bond and that's when Clark picks up a fork and asks Lois to stab him.

Jimmy is throwing up in the bathroom with Condesa offering TLC. Jimmy is sicker than they realized but he refuses to see a doctor until Clark is back to full strength. They don't notice a Phablet with little arms and legs crawl out of the toilet bowl and make its way into the bedroom.

Clark recoils in pain and realizes the shadowy figure that had approached him in the Hordr base had stolen most of his abilities, before they can figure out more the phablet interrupts with a message from Hordr_Root.

Hordr_Root informs them that despite them destroying the base and the servers he had copied some of the most serious secrets to a secondary location. The blackmail still stands and Clark has an hour to get to the secondary base or his secret will be revealed. Lois theorizes that Hordr_Root must have a secret of his own and if she can tag along perhaps she can find it in the base and turn the tables. Clark is reluctant but Lois points out that if he didn't take her she'd figure a way herself. As a friend to both Clark & Superman how could she not?

They drive close enough and with a portion of his power restored he offers to get Lois close by taking a giant leap in a single bound. Lois refuses to be carried like a 1950s damsel and they reach a high peak where Clark leaves her behind. Clark leaps down to the exact coordinates and is immediately shackled but Hordr_Root's robo guards. They reveal a holographic door and pull him inside for his rendezvous. Once the coast is clear Lois dons her Hordr mask and passes through the doorway herself and directly into the server rooms. Their she sees Hordr_Root's second leading a group of Quarmer robots to meet Superman and Hordr himself. Lois looks back and sees a charred dead body that had obviously been interrogated and her mind floods back to seeing Clark in that same position at her father's hands.

Hordr_Root is singing off the same hymn sheet and has had Clark dress in his Superman costume before also tying him to a chair. The Quarmers enter and surround Clark and Hordr orders Clark to flare so they can take what little is left of his power. As an incentive Hordr displays a photo of Clark Kent's closest friends and tells him if he doesn't give up his powers they will all be people he has to bury. In a rage Superman unleashes his solar flare but Lois runs in with a revelation.

Lois has released Clark's dual identity worldwide with a single photo. Her idea is that Hordr no longer has a hold over him if his secret identity is public. No secrets mean freedom and the destruction of Hordr. Clark now in a fury tears the second base apart as Hordr_Root sighs and abandons yet another robotic body.

Clark is distraught, angry, he cannot fathom why Lois would do something so stupid, as it wasn't like he couldn't have found a way out. By revealing his identity she has carried out the threat Hordr_Root had made, everyone Clark loves is now in mortal danger. Lois counters that Clark would do exactly that just to save one life but before they can get into a tete a tete General Sam Lane arrives in a helicopter armed with kryptonite weapons.

Clark turns to Lois and tells her he was wrong. He was better off when Lois wasn't part of either of his lives and then he leaps into the darkness.

Lois watches on as the helicopter nears with tears welling in her eyes...

Story - 1: After all the build up I share Clark's emotions at the end of the issue. Not with Lois Lane and her galactically stupid error in judgement - but with DC.

You know all this chatter with Fox and Fantastic Four? i.e. "Give Them Back To Marvel!" I found myself thinking, "Give Superman, Clark Kent & Lois Lane to a team who understands them!" I don't make the comment lightly either.

Now that the reasons for 'Truth' are fully revealed, I as a Superman fan am thoroughly broken.

The issue is a misstep and a padded out mess.

The cute 'leap' references and the 'modern woman' comments are enamoring but then you have Condesa commenting on how impressively large Superman's manhood is and it knocks you for six that the scene saw print - this isn't Grayson, this is Superman, supposedly the single greatest hero in the entire DC universe. You have one of the extremely rare bonding scenes between Lois & Clark and then you have a Gobot (Google it) phone crawl out of the toilet and deliver threats.

Everything about this chapter could have been better written and dealt with in the attack on the first base and retreading the same story from the previous issue with a few tweaks is an insult. Lois clearly made a mistake here, with emotions and memories of Clark being tortured clouding her journalistic integrity. Whether she thought it was good or not the decision was NOT hers to make and I was shaking my head in despair at the mishandling. The fact she has sacrificed the lives of Clark's extended family - her extended family seem brushed off but by Yang's words justifying it I feel rather than something Lois would really say or do. The odd thing here is that all the parts of 'Before Truth' don't seem to connect directly so with the finale next month. I am not even sure the conversation on the clifftop will even be referenced (like Clark's now famous gunshot wound to the stomach).

This is my fundamental point - they just don't know Superman - it isn't their fault because unlike teams past who always wrote storylines that 'put all the toys back in the box' for the next team this one has had to follow on from some sub par stories. But I only hope there is still time to fix him because they need to rewind - and fast. Going back to the Shuster & Siegel material as reference is very clever but when woven into a poor story it feels like a wasted effort.

Art - 1: Every issue I offer praise John Romita Jr. follows on with some ropey art and it makes you cringe.

I'm not letting my despair at the storyline affect my judgement here. It has taken a while but I prefer art that is consistent.

Cover Art - 2: I'm sure they're going for something here, merging identities and suchlike it just falls a bit flat. With a subtitle "Alienation", it muddies the water further making it confusing. Conceptually I think it was adventurous in thought. In execution it doesn't translate as clever or adventurous, I think confusing is a better description.

The cover might not reflect the story but damn it is so good it HAS to be a 5/5.