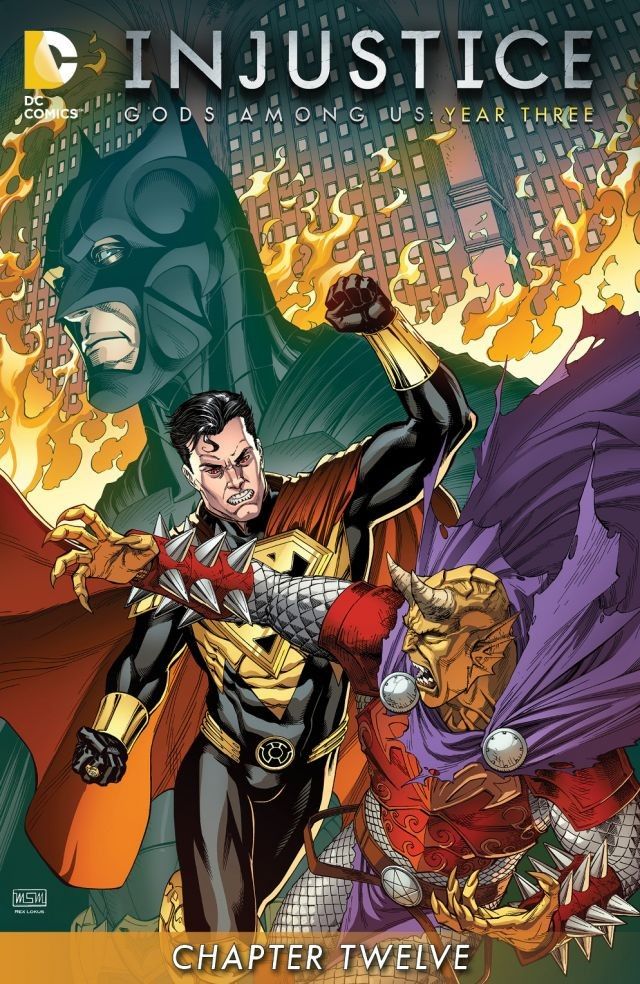 Click to enlarge
Etrigan the Demon has been unleashed on the Hall of Justice. Regime Superman and Hal Jordan fend off his demon-fire, but Sinestro isn't so fortunate. Regime tells Hal to take Sinestro to safety, while he remains to face the Demon alone. Regime counters Etrigan's fire with his freeze breath, but the Demon is still strong enough to make it a fight. Regime demands to know what Etrigan is up to by attacking him, and with short rhyme, the Demon's new host is revealed: The Batman. Batman drugs Regime with magic, and he falls into a deep slumber. Elsewhere, the Spectre and the Phantom Stranger are still at odds, until the Spectre produces a long sword and dispatches the Stranger with it, and then returns to Earth.

Story - 3: This issue had the makings of a better read than the last few in the series, but it undercut itself by rehashing the same meme, the same trope, the same malarkey that's more than trite at this point. Regime handles the fight with Etrigan well, and the writing is good in that we see Etrigan as a formidable foe, and not a weakness due to his having magical abilities. Time being on Regime's side, the fight would be his. However, conversation commences in the middle of things and disbelief sets in. Why Regime feels the need to question his opponent who is not as yet defeated, is more than unbelievable, it's moronic. This is coupled with the ridiculous pause that Regime undergoes when he discovers that Etrigan's new host is The Batman. He slows and pauses just long enough for Batman to throw the magic bubble in his mouth no less. His mouth. Etrigan in the form of a surprise attack isn't the problem; it's actually a smart move... if used in reverse. Have someone, Batman would be a good choice for his stealth, and then unleash the Demon. The reverse is yet another contrived plan that only works with the clairvoyant knowledge that the person who undergoes it will be stupid enough for it to work. Again, in order for the plan to work, the bubble has to enter Regime's mouth. His mouth.

"Deep down, Clark's essentially a good person... and deep down, I'm not."

This has been the premise for a Batman/Superman fight since Loeb wrote "Hush" and it's been misunderstood since he wrote it. If superheroes represent the struggle between good and evil, a struggle we believe that good will emerge from victorious, how is it that "Not good" has any chance at all. Loeb would tell anyone that Batman couldn't hope to prevail against Superman, and did as much to show this without killing him. However, the take away has been that Batman will do whatever it takes to win, which seems to ignore the fact that such tactics don't immediately guarantee victory. Why is it then that even with Regime, who will do what it takes to win, he has this ridiculous soft spot for Bruce Wayne? Regime can move faster than the speed of thought, and Batman is still alive because...? It was plausible when Regime broke his back instead of dealing death in Year One, however, after the stunts Batman has pulled to this point, heat vision at the speed of light should be the reaction, not a puppy dog face and a gaping maw. Malarkey.

Art - 3: The fight with Etrigan and the splash with Batman are rendered pretty well, but the Spectre and Stranger sequences have too much shadow... for shadowy characters.

Cover Art - 4: So many colors, so little costume!