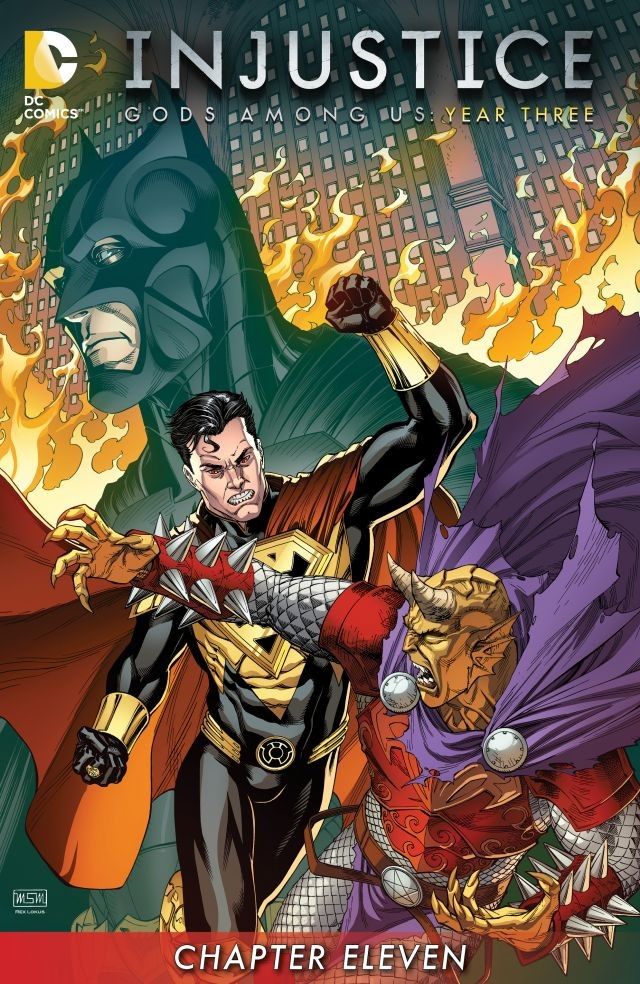 Click to enlarge
Constantine holds a council where the Insurgency tries to decipher the vision given by Madame Xanadu. It's learned that Wonder Woman's coma has been induced by Constantine. It's decided to perform the same action with Regime Superman, and Batman volunteers for the needed sacrifice. Elsewhere the Spectre and the Phantom Stranger converse about Spectre's involvement with the world. The conversation takes a destructive turn, as Spectre attacks the Stranger, their fight carrying them through the solar system. The Hall of Justice is attacked by Etrigan the Demon, who has found a new host. He lets loose his breath of hellfire against Sinestro, who screams in agony as the Hall explodes and burns.

Story - 2: Injustice continues to mark time and space, as opposed to deliver a story. The timely appearance of Etrigan allows for some action, but not even the Demon can make this installment turn any faster than the snail's pace it continues to tread. There is too much being done to keep the reader in the dark, to facilitate Madame Xanadu's vision, and that has inhibited any solid movement. Visions, prophecies being revealed work best with action preceding and accompanying them. A scene with Constantine and the rest, sitting at a table, ruminating on the meaning of the vision is less than what the issue should be. The fight between the Spectre and the Phantom Stranger was remarkably bland for two beings of such immense power, and again, slowed and made torpid by the need to keep readers in the dark as to whom the host for the Spectre currently is. The installments are short to begin with, so the plotting for them should take into account the languid nature of padding out the story, when it's more than obvious to anyone consuming the story.

You have to wonder what Taylor might conceive if he had the inkling, the area, and the freedom to do so. The biggest shackle on Injustice is that its future is predetermined. The story must end in a certain manner, Regime Superman will not suffer a defeat at the hands of Constantine, Batman, or anyone else but Superman. There is some entertainment value in seeing how he does it, going along for the "journey," if you will, but the road thus far has been bland and uneventful, a reminder of the limitations of such a storyline and the inflection of such characters that are predicated on heroism. Still, next issue may be better, eh?

Art - 4: The sequence with the Spectre and the Phantom Stranger is both interesting and intriguing. They walk on the rings of Saturn, yet are visible to the reader, which speaks to their incredible abilities; it's all done very subtle, but assertively, nonetheless.

Cover Art - 4: So many colors, so little costume!