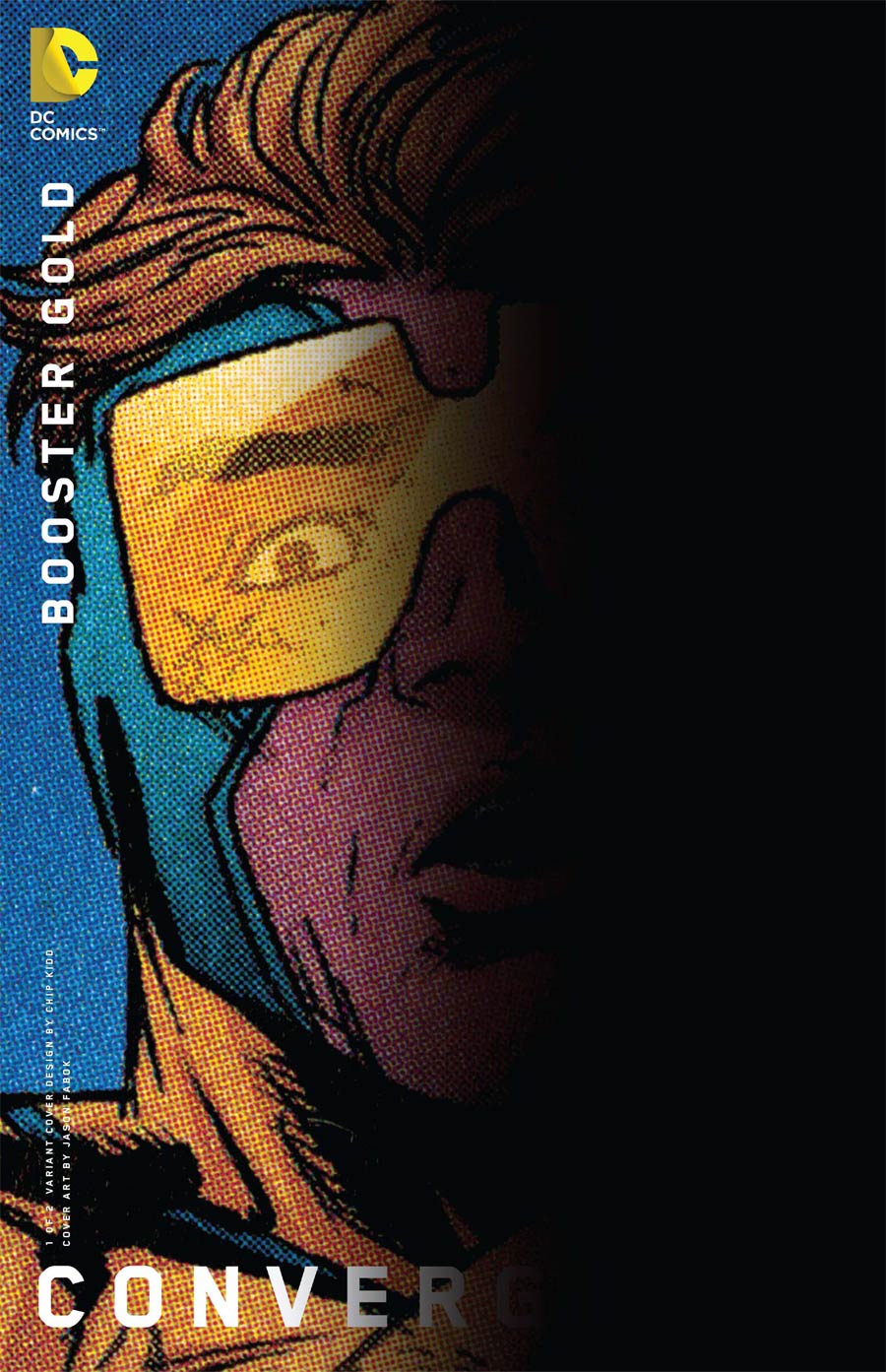 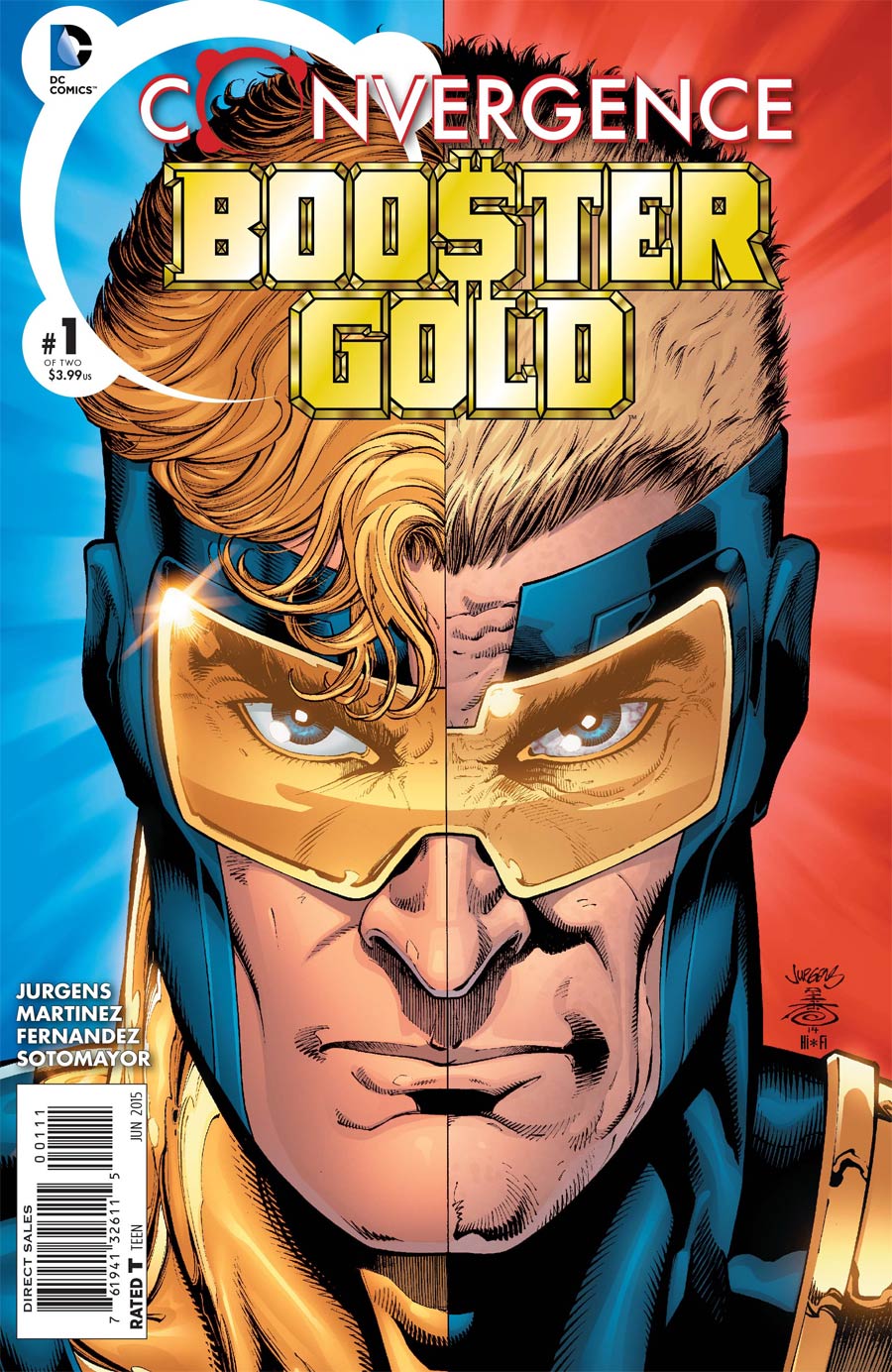 Click to enlarge
Gotham City, 2462 AD. Working for an unknown person, Booster Gold steals the SKS-1 (Skeets prototype) and attempts to travel one hour back in time to deliver the stolen military tech. Something goes wrong, and he is sent to our time instead. (New 52 Booster Gold's origin)

Present day. Booster wakes up. He is held captive by Deimos in the Warlord's castle on Skartaris. New 52 Skeets and Pre-Flashpoint Rip Hunter rescue him. When Rip realizes his (older Pre-Flashpoint version of) Booster and Michelle Carter are also being held, the trio turns back.

The two Boosters meet just in time for the older Booster to be teleported (due to a chronal affliction) to another domed city on the planet Telos.

A fight between Deimos' Lizard Men and Warlord's ally Machiste tumbles into the room. Booster and the gang fight off the Lizards and escape the castle. They track down older-Booster in the 25th century's Pre-Crisis Metropolis. Home of Superboy and the Legion of Super-Heroes.

An obligatory fight brakes out between the unacquainted heroes. Booster is teleported to another domed city, Pre-Zero Hour Metropolis. And he meets - you guessed it - Blue Beetle, aka, Ted Kord.

Story - 3: Once again, when DC promises to simplify things, man do they complicate them. I can't tell you how much time I spent on the internet trying to figure out which timelines these characters came from.

But if you are a fan of Booster, especially the Geoff Johns to New 52 era, then you will like this book. It is both Pre-Flashpoint nostalgia and a continuation of his current version's storyline. This tie-in is also unique because it ties into the Convergence miniseries more tightly than any other.

Although I prefer his original premise, it is nice to see Booster's origin recounted. Who Booster was working for and why they wanted the militaristic Skeets prototype, could lead to some interesting storylines.

Minor quibbles: The Legion have use of their powers even though the dome is still in place. I read in an interview that the appearance of older-Booster restores metahumans' powers under the dome. But this was not explained in the book. Though it was vaguely hinted at in the Future's End issue.

Also, the fight between Booster's crew and the Legion. To complain about two heroes tussling, only to realize that they are on the same side, is as cliche as the plot trope itself. But I would be remiss to not mention it. Especially considering it is the Pre-Crisis Legion who instigates the fight. They are supposed to be from a more enlightened time than our own, not to mention that they take inspiration from Superboy. (Who is practically leading the charge, by the way) Jurgens could have brought the team in stern, 'with their dukes up,' but not attack. This would actually create more tension than most fights ever could.

(Also, Booster's New 52 forcefield is so strong, it hurts Pre-Crisis Superboy when he punches it?)

But I gotta say, the book teases a Booster Gold/Blue Beetle team-up in the next issue. And that is a trope, that never gets old. I enjoyed the book fine. But the multiple Boosters, confusing continuity, and bouncing around, make it difficult to construct a consistent emotional narrative. As a result, we get a story with pleasing moments, but one that is told in a choppy, confusing manner.

Postscript: I just want to take a quick second to highlight a throwaway panel. When the two Boosters meet, New 52 Booster says, "I don't know if Superman will take my call, but if he does, maybe he can help." To which the older, Pre-Flashpoint Booster says, "Your Superman would ignore you?" He was about to further expound on his surprise, but was interrupted.

Perhaps I am overanalyzing, but this felt like a swipe at the current ideation of Superman. We all know the kind of Superman Jurgens wrote. One who was never too busy for anyone in need of help. I find it interesting that the writer holds this up as a way to differentiate the two universes. I do not know whether to take it as a good sign that there are still creators at DC that prefer (or at lease appreciate) the classic characterization, or a sad reminder of how much the character has changed.

Art - 3: This one was difficult to judge. Martinez does not commit many errors, but plays it safe throughout. He does a good job of making his characters "act," but his level of detail is inconsistent. His drawings are mostly pleasing, but not always.

Some of his panels are under-drawn. They look crude or unfinished. Others, like his attempt at the Telos wasteland or Skartaris, are better than the Convergence proper renderings.

Cover Art - 3: I appreciated this much more after reading this issue. Which, for a cover, is probably both a good and bad thing. There are subtleties in Booster's face. He looks much older on the right, than the left. Though the cover features the same person, they have had very different experiences. It is the small subtle things that make a world of difference. It is an appropriate cover. But if the cover does not 'jump out' at you in the first place, it does not help convince people to read it. As a result, they might not ever appreciate the cover at all. Perhaps this cover is a '4' after you read it, but not before.

It would have been nice to see the worlds that they came from in the background. Or an optimistic background for the younger Booster, and a darker background for the older Booster. (Or vice-a verse-a if you want to highlight the brighter pre-flashpoint universe over the darker New 52 universe) A change like that alone could turn an average cover into a home run.