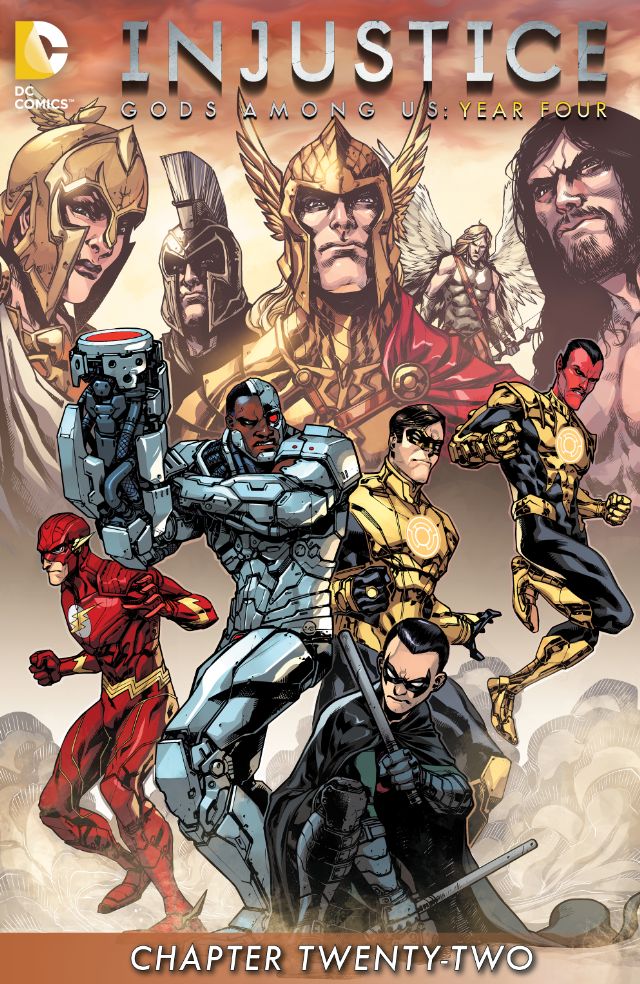 Click to enlarge
Darkseid and Regime Superman continue their battle on Apokolips, but the destruction alerts the gods of New Genesis, and Orion is dispatched to investigate. The Batman appeals to Highfather for his assistance with the situation on Earth. Highfather is reluctant, until Batman informs him that Ares and Darkseid are in league together. Orion interrupts the battle between Regime and Darkseid, to deliver a message: if Darkseid and Regime Superman continue their battle, it will result in millions being killed, including Darkseid... but not necessarily Regime. On Earth, the leaders of the world launch a nuclear strike on Themyscira, hoping this will rid them of their Olympian problem.

Story - 1: Regime Superman and Darkseid's fight lacks any significance, due to the late entry of Darkseid as the villains behind the scenes, and the flimsy motivation behind it. If this is revenge for what happened to Kalibak, that begs the question, what happened to Kalibak? Was he beaten? Killed? Does anyone even remember? Care? Darkseid has never needed an excuse to go after anyone for any reason, so long as it serves whatever machinations he's about at the time. Kalibak was soundly beaten by Regime, but we're not told of his fate until now, four years later, which is clearly Buccellato's interpretation. In a book that has so clearly delineated a kill with no ambiguity, Kalibak is an anomaly. He states before being defeated, that he cannot be killed, and there's no reason not to believe him, yet four years later, he was killed. OK. Is this a kill a la Hercules? The real death? Regardless, it's a needless complication to an already lacking story. The world leaders' nuclear strike is a reminder of how little story there is to tell with Injustice. Substitute Captain Atom for the nukes, and Kalibak for Darkseid, and it's a replay of what occurred in Year One.

Why is the match between Darkseid and Regime Superman so banal? It might be just me, but a contest between these two heavyweights should be an edge of your seat matter. However, after seeing Regime trounced by Wonder Woman, having his arm broken, no less, I just don't believe that he could stand against Darkseid for any length of time. There's an Injustice apologist out there, who will state: "Well, he didn't want to fight Wonder Woman!" Yeah, whatever. This isn't Superman, it's Regime Superman who will do whatever it takes. That's what he tells Darkseid with reference to Kalibak. It seems, however, that his new stance is a vacillating one, at least when it comes to Wonder Woman and the Batman. For some reason (the plot for the video game), Regime's new found expediency cannot be brought to muster for the aforementioned. Green Arrow was killed for less, but Regime couldn't summon heat vision enough to repel Wonder Woman, but he's pushing back Darkseid with it? Not only this, but their battle is so basic i.e. punch, punch, talk, talk, punch some more. The array of powers available to the both of them seem to be thrown into the bin, to display the fight of two burly brawlers, drunk late Saturday night. There's so little imagination to the fight, I just want it to be over and for something interesting to happen. Still, since that isn't going to happen, and Buccellato has proven that he can drag a fight out for an eternity, there's little to do but put the kettle on, and wait for the year to be over.

Art - 4: Good visuals this time out. Highfather's face is priceless when Batman informs him of Earth's situation, things Highfather didn't know. Yes, Highfather, even a New God pales before Bat-God.

Cover Art - 3: They should have switch with one of the splashes within.