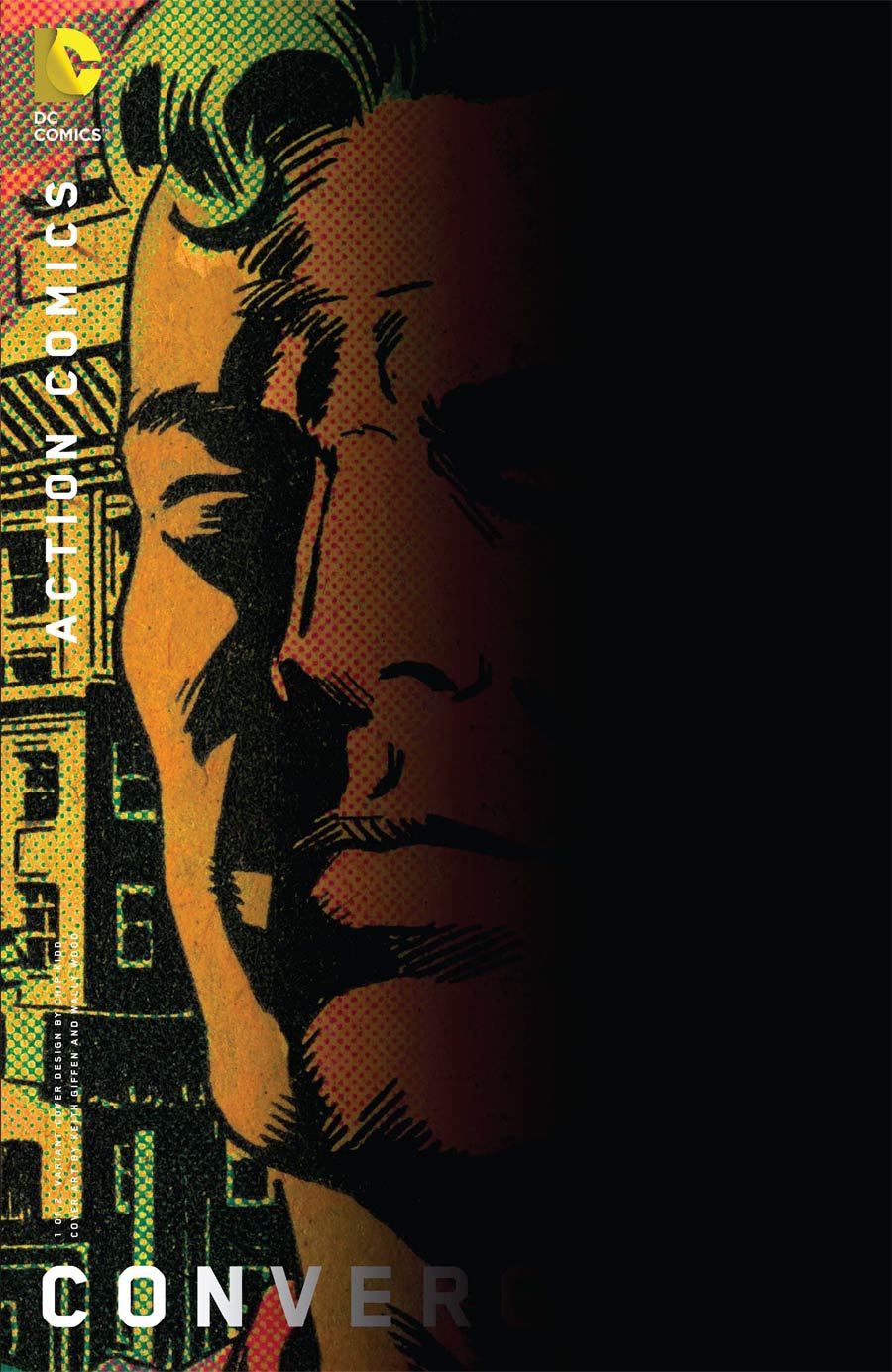 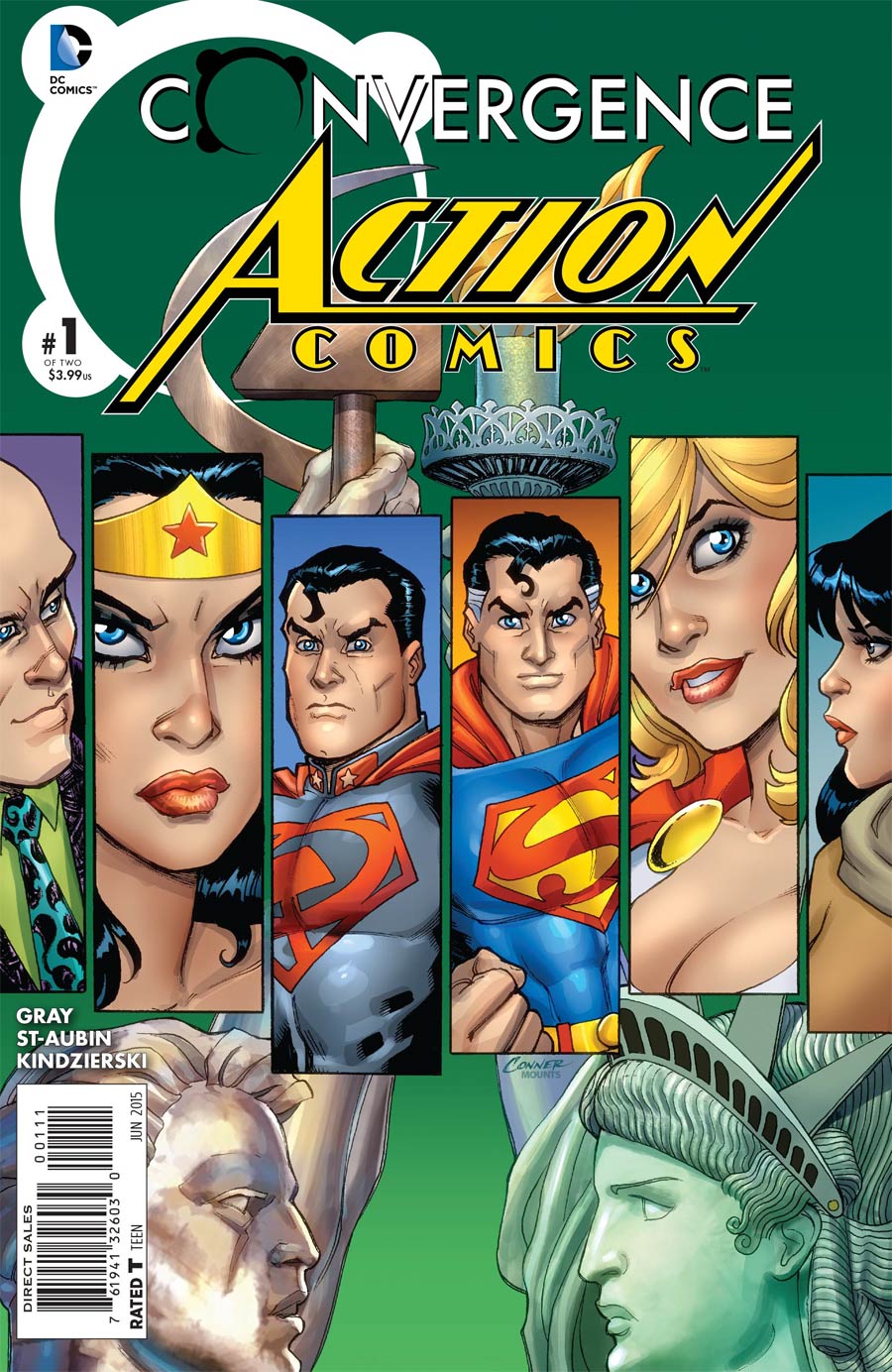 Click to enlarge
A dome of unknown origin has trapped the people of the Metropolis of Earth-2 and the Moscow of the Red Son Earth in their respective cities. On Earth-2 Superman and his cousin Power Girl struggle to live without the powers that allow them to be heroes. In Moscow Lex Luthor taunts Joseph Stalin and tries to figure out how to escape the dome. Without warning a booming voice tells the people of both cities that their times have ended and that their worlds are dead. Everyone has been granted life as a result of the unseen enemy's dominion and now that captivity turns to competition. Defenders of each domain will battle the other and only the greatest of heroes will live. If they deny their captor everyone will be destroyed and if they disobey him their cities will be crushed by his hand.

Story - 4: I'm in a quandary trying to figure out how to feel about this whole Convergence event. On one hand it is a nice way to look back at select points in DC's history and let certain versions of Superman, Batman, etc. out to run and jump and play like their contemporary counterparts. This idea should make me happy as someone that has a fondness for many of the eras that they are supposedly celebrating. On the other hand it seems a little disingenuous to try to bring in older readers with their favored versions of the DCU only to take it all away again in June with wildly different takes on Superman, Batman, etc. The fact that the event is only lasting two months added to the feeling that DC seems bound and determined to move away from everything the eras they are looking at during Convergence takes away a lot of my enjoyment.

It would be like you had this significant other (boyfriend, girlfriend, wife, husband, whatever) that had previously left you coming back and rekindling the relationship but saying that in a certain amount of time it's all over and they are going off with someone else. It might be fun but the fact that you know it's not going to last and that they are going to break your heart again diminishes the fun that you might have.

In short as much as I liked seeing the Pre-Crisis Earth-2 Superman and Lois Lane and Power Girl I know that in two months it's over, so it's hard to get all that excited about something that has such a definite end point.

Despite these misgivings I enjoyed this comic. Justin Gray does a good job of exploring what it would be like for these two versions of Superman (along with their supporting casts) to be trapped in a dome with no powers and no way to get out of the situation. Both the Earth-2 Superman and his Red Son counterpart are men of action so the fact that they can't do what they were born to do is frustrating and Gray makes that apparent without hitting us over the head with it. I especially felt bad for Power Girl, who is not only adjusting to having bags under her eyes when she tired or going to the dentist but also the scars of what happened when her powers disappeared. Gray made her plight sympathetic. The only misstep to me was her concern about losing weight. Do some women worry about gaining weight? Yes, but it was a bit clichéd that the one character in the story that is worried about getting fat is a woman. I'm not suggesting that Gray himself is sexist because I don't know the man and I don't like throwing around those types of accusations but it did disappoint me that that was where he went for a character beat.

One of the elements of this issue that bugged me the most is not something I can blame on Gray. The scenes that take place in the Red Son universe revolve mostly around that version of Lex Luthor and to be honest I hated Lex in that story. I am not a fan of the "I'm the smartest guy in the room, look at how clever I am and how stupid everyone else is" character and as originally conceived by Mark Millar this Lex was that in spades. So I can't blame Gray for playing the character that way because he is working with what has already been established. The one thing I can tag him for is not focusing more on the Superman of that world. The focus of the Red Son scenes was on Lex and I don't care about what Lex and his Lois are feeling. I care about that version of Superman and he was barely in the story.

Then again the cover for the second issue has Wonder Woman and Power Girl fighting, so maybe Superman isn't the focus of the story. Either way I hate that Lex. A lot.

Other than that this was a fun read. The scene at the beginning in the park was well handled, the scenes with Andrew Vinson were also nice because I always liked that character and Gray did a great job establishing both worlds before the conflict is introduced. Despite (or maybe in spite of) my previously mentioned misgivings about the very idea of Convergence I enjoyed reading this comic and got sucked into the characters. I kind of wish this was more than a two issue mini-series because I would have liked to catch up with these characters (especially the ones from Earth-2) but in all honesty it is better this way. The less time I spend with them the less attached I am likely to get, which is for the best.

Art - 4: I liked the art quite a bit in this issue. St-Aubin's style worked for the story Gray was writing. He made the two versions of Superman and Lois look distinct and the pages which flashed-back to Power Girl's history were a lot of fun. It was nice to see both Infinity, Inc. and Helix again. This issue was mostly character driven and St-Aubin told the story through facial expressions and body language which I liked. There were a few missteps here and there, like Lois looking off during the scene where she storms off because she's mad the group is talking about the dome, but other than that I didn't have any complaints about the art.

Cover Art - 5: This is a fantastic cover. Not only do the characters look great but I love the composition. The framing device of the Statue of Liberty and her Russian counterpart made for a striking image. The two Superman, Wonder Woman, Lex, Lois and Power Girl all look great, especially Power Girl. She has a real charm to her and there is so much life in her eyes which is a nice contrast to the anger that fills Wonder Woman's expression.

Variant Cover Art - 2: I am not a fan of the variant covers that go along with this event. I appreciate that there is a common theme with them but I just don't like the way they look and this cover is no exception. It's artistic and all that but it is also not for me.