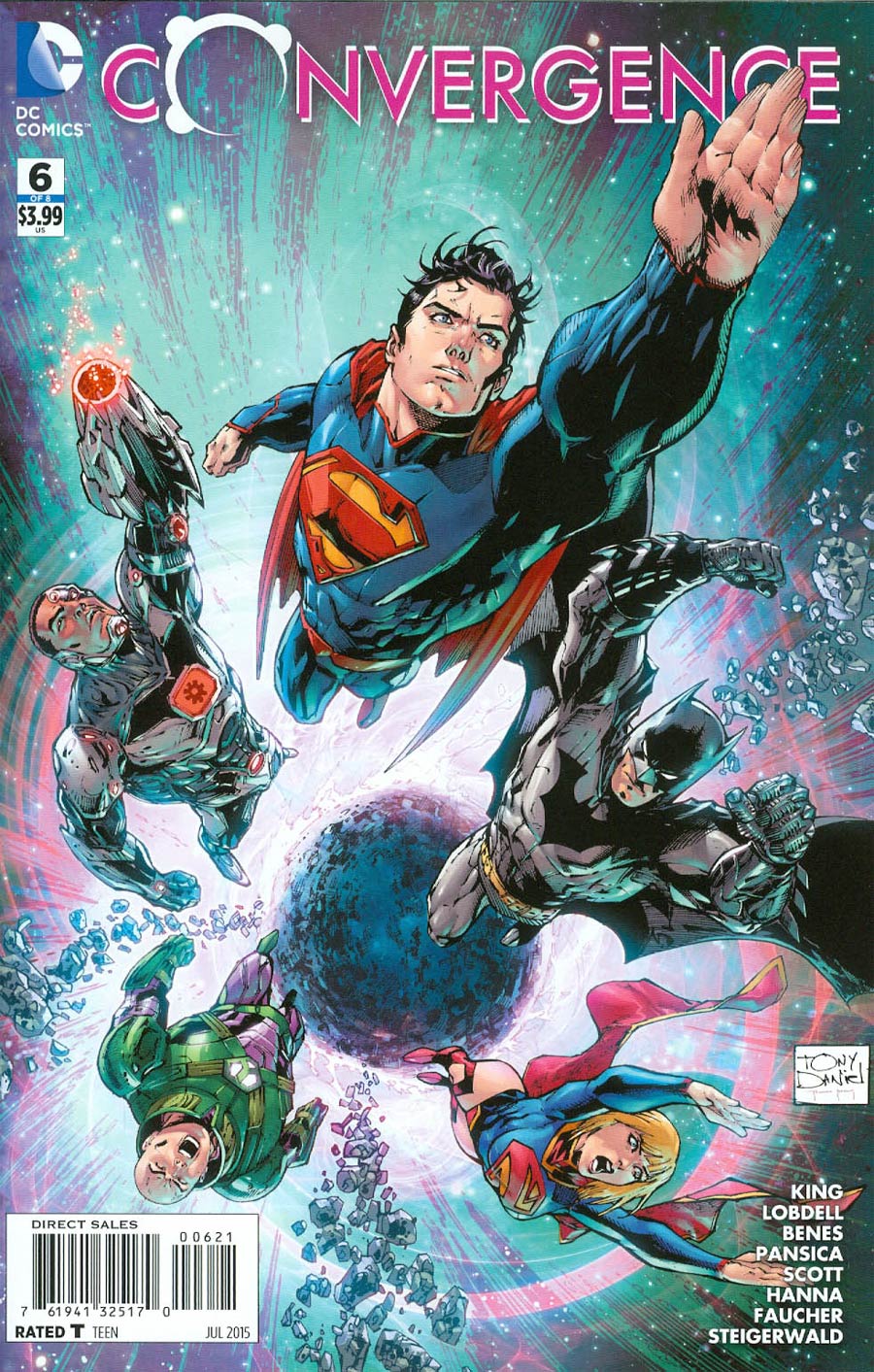 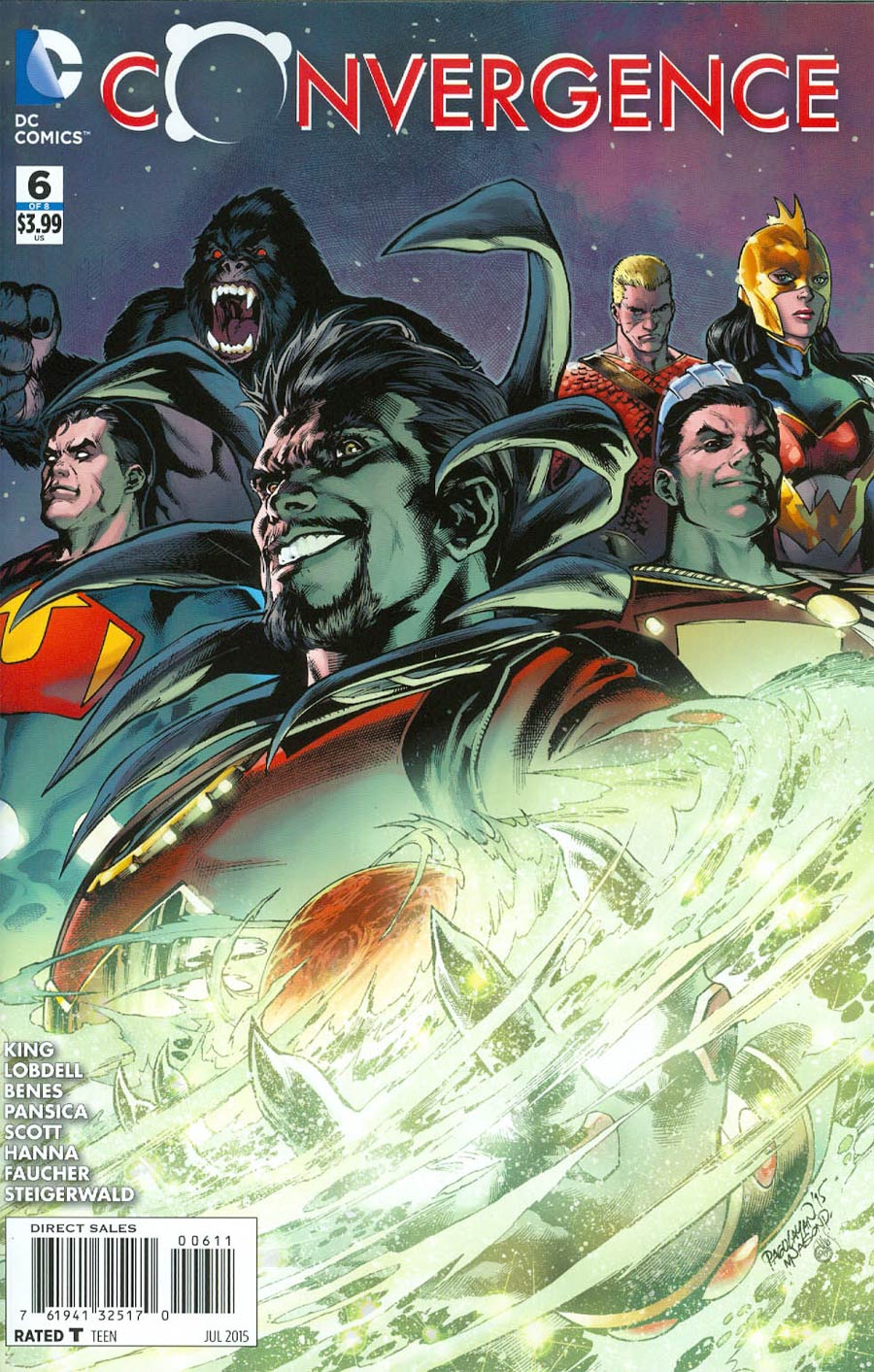 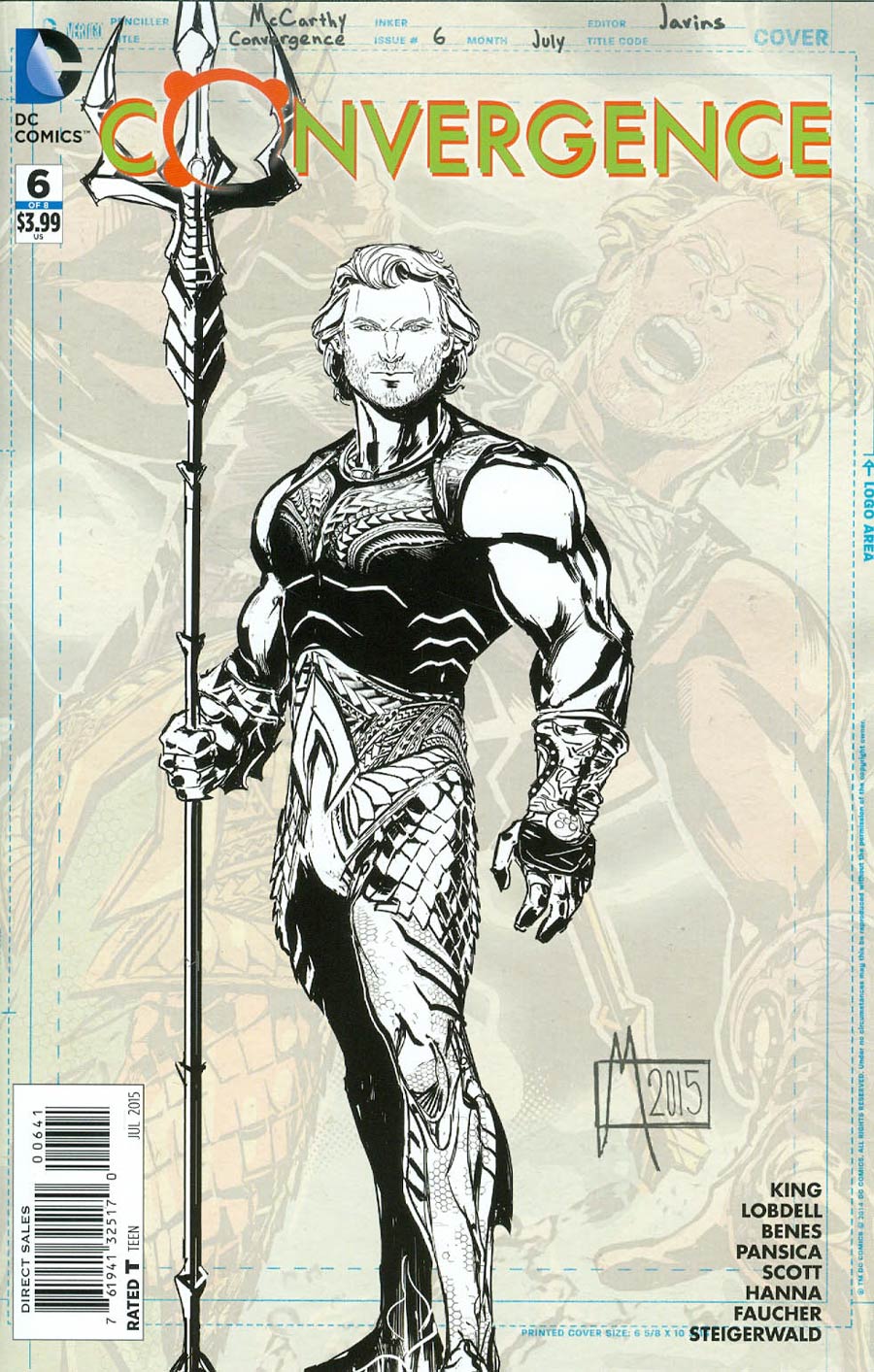 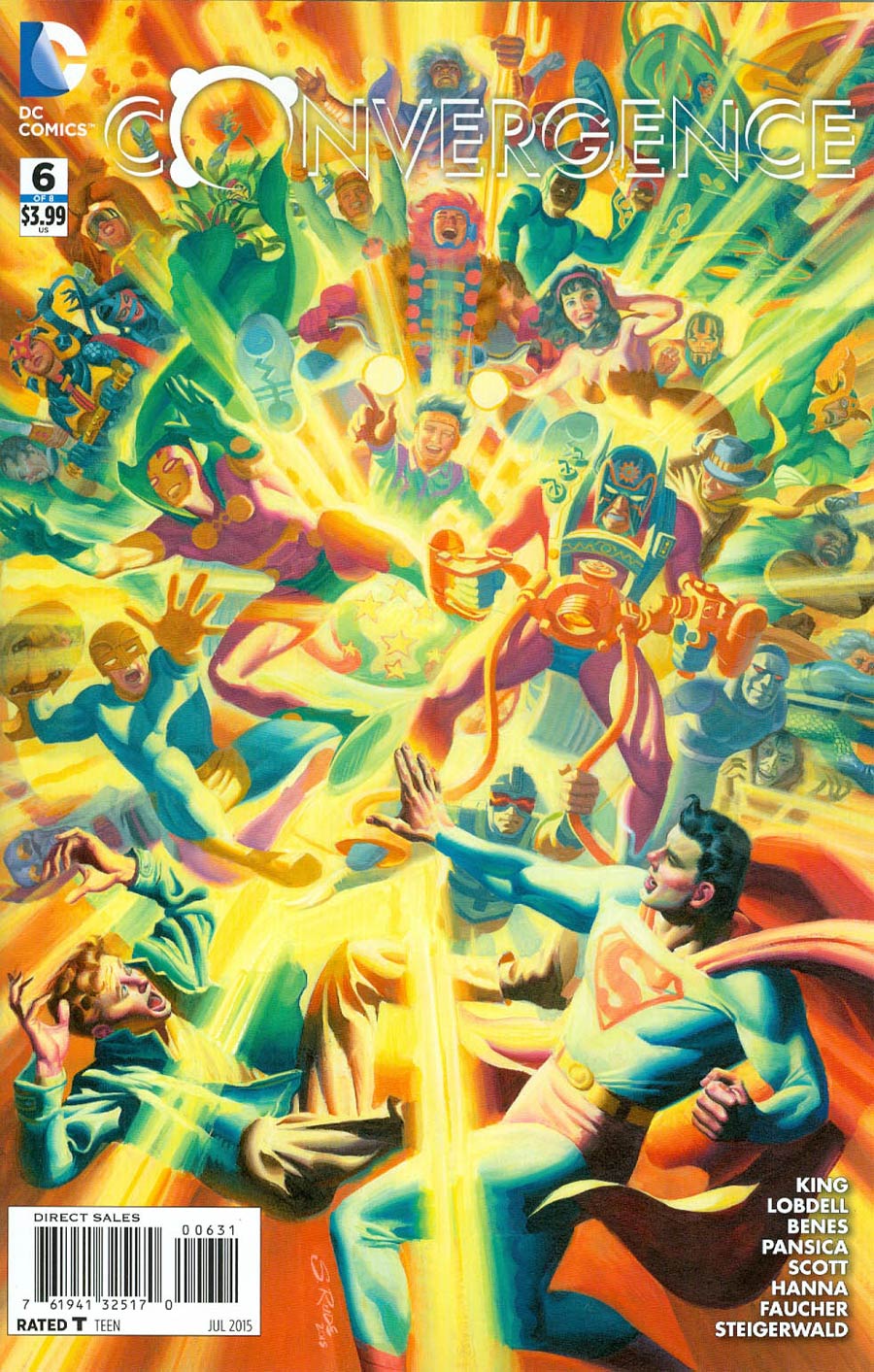 On Earth 0, the Justice League receives a warning from Justice League United. The planet Telos is 'pushing' its way into the universe. (Telos previously existed outside of space and time).

Superman and Supergirl check it out. They are joined by the Red Lanterns, Blue Beetle, Jediah Caul & Captain K'Rot, and the Oracle. (Oracle is the giant stone monolith from the recent Superman comics. A being who simply watches when something cosmically significant happens).

The Guardians, Darkseid, and the Monitor look on as well.

Superman postulates that the planet may need help. But when his fellow heroes ask what they should do, he tells them to stand ready and wait for what happens next.

Deimos repeats his offer to the cities of Telos. Pledge their loyalty to him, and survive. If they refuse, they will perish. They have one hour to decide.

Deimos explains to Yolanda that his true goal is not to rule them, but to lead them to their deaths. Then, and only then, will a new universe be born. His universe.

Telos (the individual) has disappeared. Flash and Grayson stumble into a fight. Val Zod and the Titans are fighting the Extremists. They are about to retreat when Pre-Flashpoint Superman, Flash (Wally), Red Arrow, and Batgirl (Stephanie Brown) show up to save the day.

The heroes split up and recruit like minded metahumans. Superman tells Grayson he is the key to victory. He must convince Telos to help them.

Earth 2 Flash runs into '90s Superboy, then Barry Allen from the original CRISIS.

Grayson convinces Telos to help the heroes in their plight.

The alliance of heroes converge on Deimos. Before they can land a punch, he calls on his own recruits. The Flashpoint heroes, the Crime Syndicate, and Kingdom Come Superman & Wonder Woman. If they kill the heroes, Deimos promises the planet will be theirs.

Story - 3: Welcome to the party, Convergence! We were ready for an earth-shattering, far-reaching affair... seven issues ago.

Better late than never. This story finally feels like a DCU event. The skies are red, the Monitor is watching, and the "in-continuity" heroes are on the job. (Well they're standing around, but they're on the page at least).

As refreshing as this issue is, it still feels hollow. Whoever has been helping Jeff King - Scott Lobdell this week - orchestrate the characters and plot points necessary for a company wide crossover, they have not helped him acclimate to the subtle art of comic book scripting.

King has an odd way of pushing the story forward without delivering any action or activity. At the risk of boring you, I will recap the issue again.

A ton of characters talk about the appearance of the planet Telos. Deimos redelivers a monologue. He and Yolanda talk about his plans. After an inconsequential fight, there is talk about recruiting. The recruitment happens off panel. The pattern continues...

Everything important, is spoken. While incidental moments are expanded, with full-on action.

The only thing close to substance came in the final scene. The promise of a showdown. One between the resistance and the loyalist. But there is no build up.

As the scene starts, a reader's reaction should be, 'This is it. Hope it lives up to the hype.' Instead, I thought, 'Oh. I guess they're attacking Deimos.' I did not expect it to happen so abruptly. Not the kind of surprise a writer aims for.

Instead of creating a symphonic world of cause-and-effect, King slaps together a patchwork of indirectly related moments. As a result, the story is devoid of emotional resonance. The only thing better than the release of story tension, is the build up of that tension. When the writer fails to properly lay the groundwork for a big moment, he loses both the build up and release.

At the end, my question concerned the villains. Why would anyone follow Deimos? He has already given a serve me or die ultimatum. Therefore, the promise he makes to his recruits is not credible.

Since they cannot trust him, the villains will probably overthrow him. If so, it would behoove them to fight Deimos first. Then deal with the alternate versions of themselves after.

Two of Deimos' crew are an especially ill fit. Kingdom Come Superman and Wonder Woman. Despite the dark places they went in Mark Waid's story, they are still good people. They are heroes. They would not kill, and they would not follow the orders of a despot. KC Superman can spot a bad person when he sees one. His overreaction to those 'bad guy heroes' in Kingdom Come may have been wrong. But King proves he does not understand the character by putting this particular Superman in with the villains.

Jeff King has either done too much executive producing over the past few years and lost his feel for story, or he is so unfamiliar with the ebbs and flows of a comic script, that he is out of his depth. Or maybe he is just happy to write 'kids stuff' and collect a paycheck.

Art - 4: Two pencilers in this issue. Ed Benes and Eduardo Pansica. Because the script calls for nothing more than talking heads, this is a tough assignment to screw up.

With that in mind, Benes is a nice choice. He is great a drawing pin-up shots. But not at conveying emotion and story. Because he does not sweat blocking and body language, he can usually work fast without sacrificing quality. I am surprised he needed help penciling. Probably another sign of an inadequate lead time for the series as a whole.

My only two complaints are nitpick-y. On the first page, Wonder Woman is staring off into space instead of looking at the Martian Manhunter hologram. It may be petty, but it shows how little care Benes puts into the storytelling side of his job.

Also, the second page. Supergirl is bent over, her, uh, asset reared. If I were an artist and I knew my mother was going to see my work, I would compose my women with a little more subtlety. But maybe their mothers aren't fans. ;)

To be clear, we have all seen much worse in comics, by contrast this is a minor offense. But it is uncalled for in a book that is supposed to appeal to the broadest range of fans. Not to mention that Kara is a younger character.

But the artistic duo pull off their job well. They have a lot of two page splashes and characters to draw. Virtually every panel is well rendered and pleasing. This is one of the better issues from a visual standpoint, to be sure.

Cover Art - 4: This cover is appropriate, in that the static nature of the figures represent the little activity inside the book. If the cover artist avoids spoiling the near showdown at the end, he is left with few options. This shot is as good as any.

A hand reaching into the universe is a call back to the original CRISIS, and foreshadows the upcoming changes to character and continuity.

It also focuses on antagonists, which creates conflict. King could take some pointers from Pagulayan.

If the characters featured on the cover were more prominent inside, this image would be perfect.