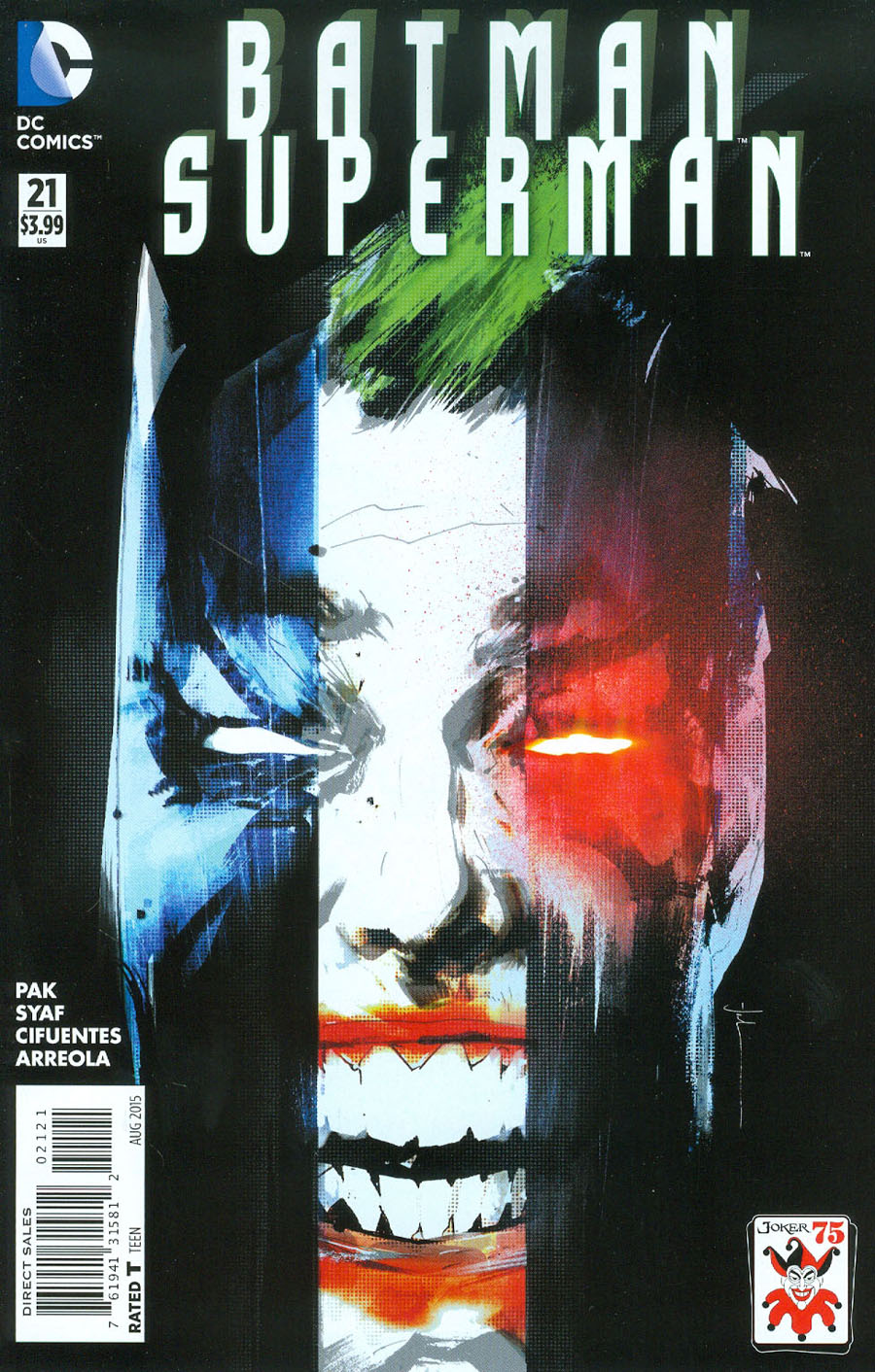 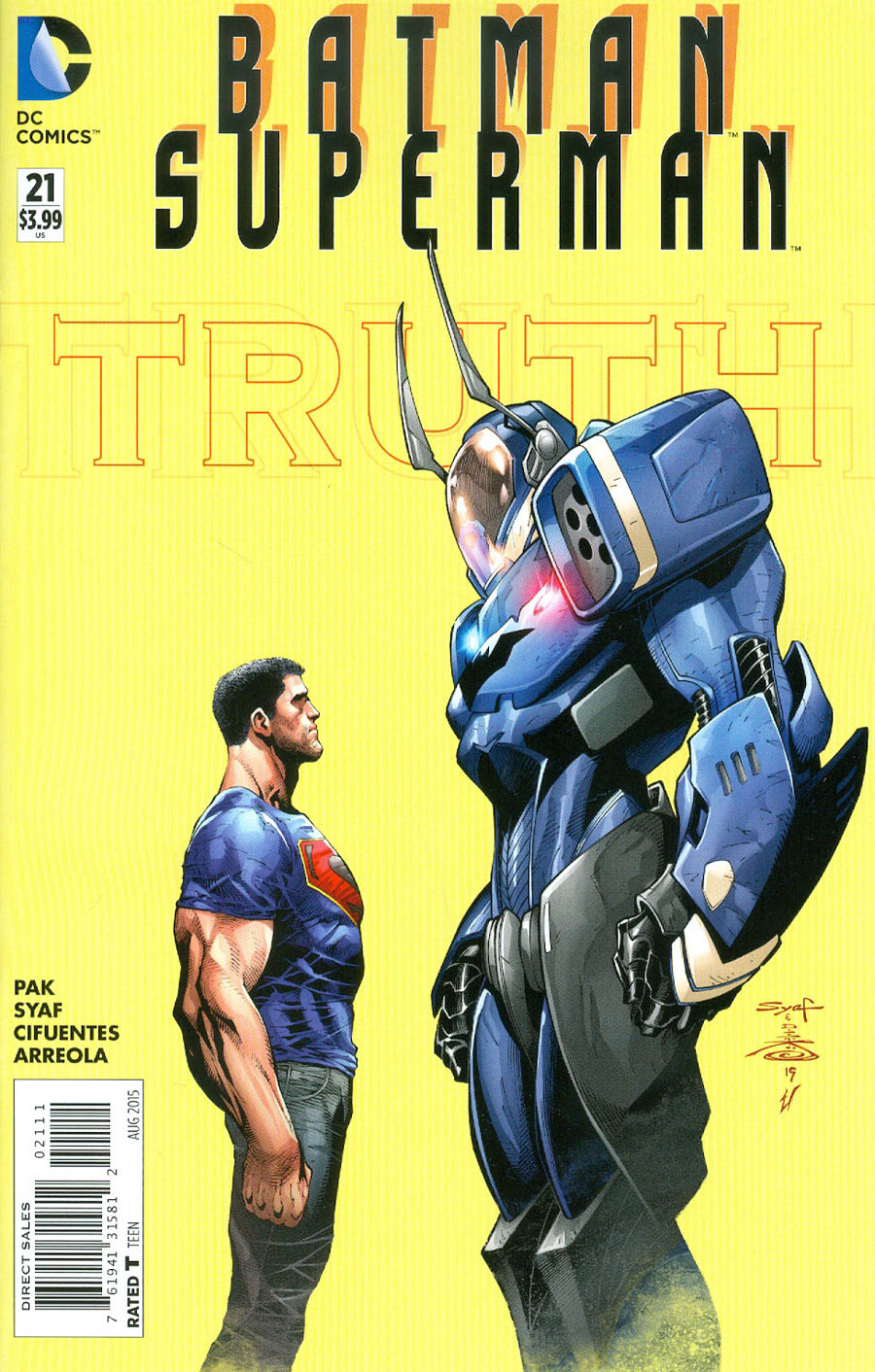 Click to enlarge
Lois Lane has revealed that Clark Kent is Superman, and now all his enemies know where to find him. He can no longer hide behind his human persona. Thus, a whole lot of really, really bad guys descend upon the city of Metropolis.

And all of them want to kill Clark Kent.

And though Superman is depowered, he can still hold his own against these bad guys. As a matter of fact, to Superman, it feels good to be able to fight at street level.

However, the Metropolis police department don't appreciate the destruction and mayhem that Superman attracts to the city, and it soon becomes obvious that the tension is revved up a notch by Lex Luthor.

An angry Superman confronts Luthor about this. While there Luthor reveals that the thugs that have been attacking Superman have been using weapons with a unique energy signature that originates from Gotham.

Off to Gotham they go!

Upon arrival, Superman discovers that the Waynetech building is under attack. He saves the security staff and the villains run away. Under the mistaken idea that it was Superman breaking into Waynetech, Bat-Robo-Cop-Thingy arrives on the scene and tries to arrest Superman, but Superman quickly disappears - leaving Bat-Robo and Luthor behind.

With evidence about the unique weapons in hand, Superman heads towards the Batcave. Here, Alfred tells Superman that Bruce is dead, and thus cannot help him.

But is the Batman dead? Bruce is always up to something, and Alfred was once a stage actor, so Superman is not so sure that his friend is gone.

But since Batman is no longer... well... around. Superman decides to put Batman's unused toys to good use. With Alfred's blessing, Superman takes the Bat-motorbike, paints it red and blue and decides that this is his new mode of transportation. It will come in handy as he continues to fight crime.

Story - 2: The Good: I kind of like the idea of Jim Gordon being in a Robo-Cop-Type Batman suit. It's weird, but different.

Also, I like that Superman painted the Batbike red and that he is going to use it to help him fight crime. Superman may be depowered, but using the Bat-gadgets will help him as he battles the bad guys.

Superman may be depowered, but he still has keen powers of observation. He can tell that Alfred is sad over the death of Bruce. And the one time I feel like Superman is in-character is when he is in the Batcave conversing with Alfred.

The Bad: It's official. Superman is the new Batman-slash-Punisher.

I'm sorry. I hate to say this. But I HATED this issue. I would give it a 'one', but I just can't quite make myself do that to the big guy. It's not his fault that the powers-that-be want him to be Batman.

Superman busting heads and actually liking it is off-putting. I like a more controlled Superman. Being out of control is for punks and thugs. Superman, even a depowered one, should be more mature and in control.

Lois Lane's story arc ticks me off. She reveals Kent as Superman to the world and then claims to still be Clark's friend. Uh... no. Friends don't put friends in danger in the name of advancing their careers. Then, Lois whines at Clark about HER life being messy. And how did revealing Kent as Superman help anybody? Answer, "It helps no one. No one but her." Not liking this version of Lois at all.

Since Superman no longer has a secret identity, it's going to be fight, fight, fight and more fighting all the time. Not a very good way to make Superman 'relatable.' Kent was the human side of Superman. Now that's gone.

I don't know. Maybe that will make some fans happy. But I liked Clark. Superman is awesome, but I liked the idea that this all-powerful man would obey Ma and Pa Kent, have to meet the Daily Planet's deadlines, and have to go down to the grocery story for a jug of milk. You know, like the rest of us.

Nothing wrong with a good fight scene. I just don't want it all the time.

Conclusion: Am I a little bitter about the 'new' Superman? Yes.

Art - 4: Syaf and the art team have done beautiful work in this issue. The pencil and ink work are bold and clean. But I don't like Superman's look. The crew-cut GI Joe Superman with the angry-face just doesn't do it for me.

Cover Art - 4: The cover gave me a slight chuckle. Superman looking up at Robo-Batman is actually pretty funny. However, Superman's arms are too long. He's an alien, not a gorilla. But I still liked it.