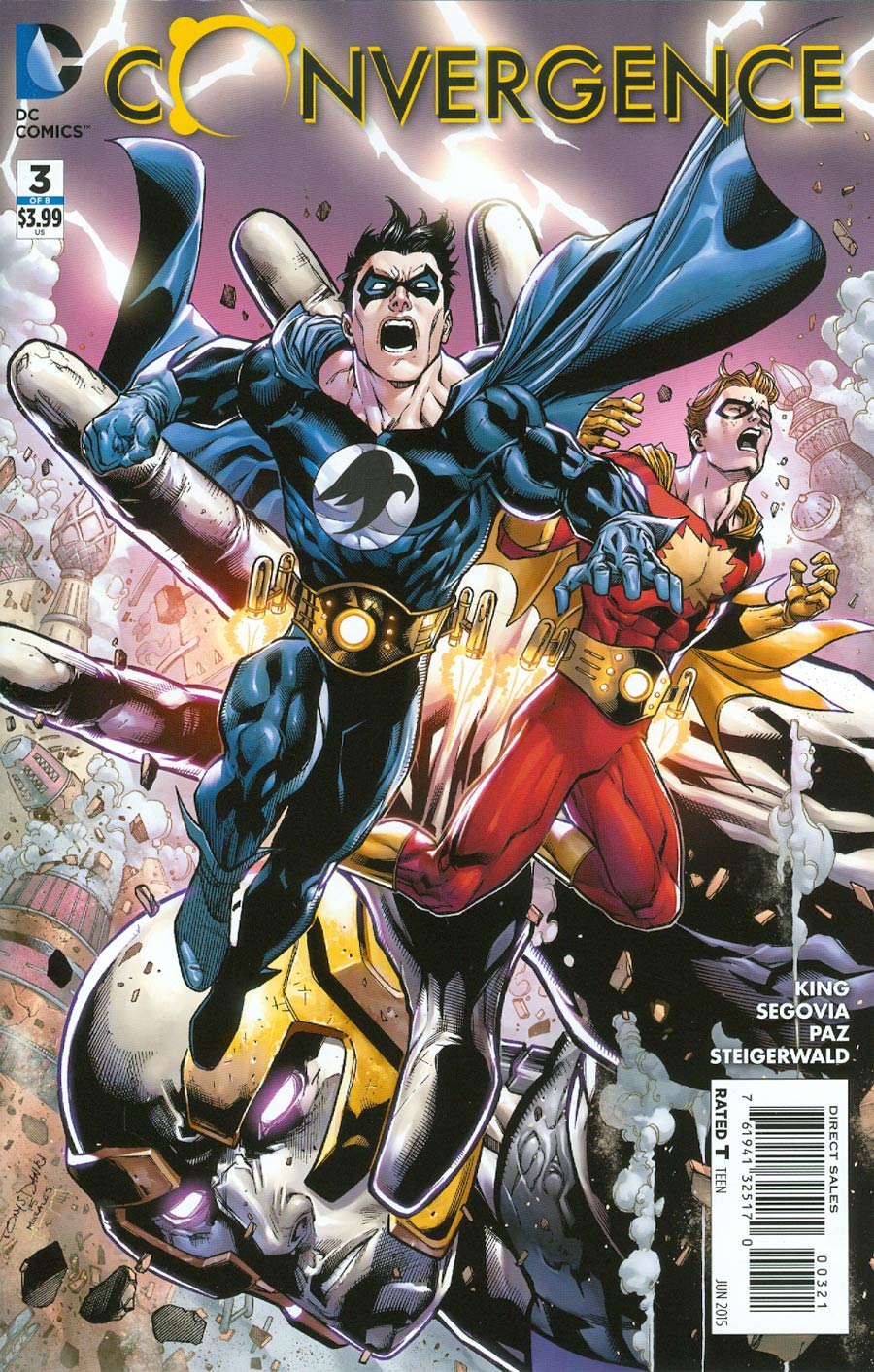 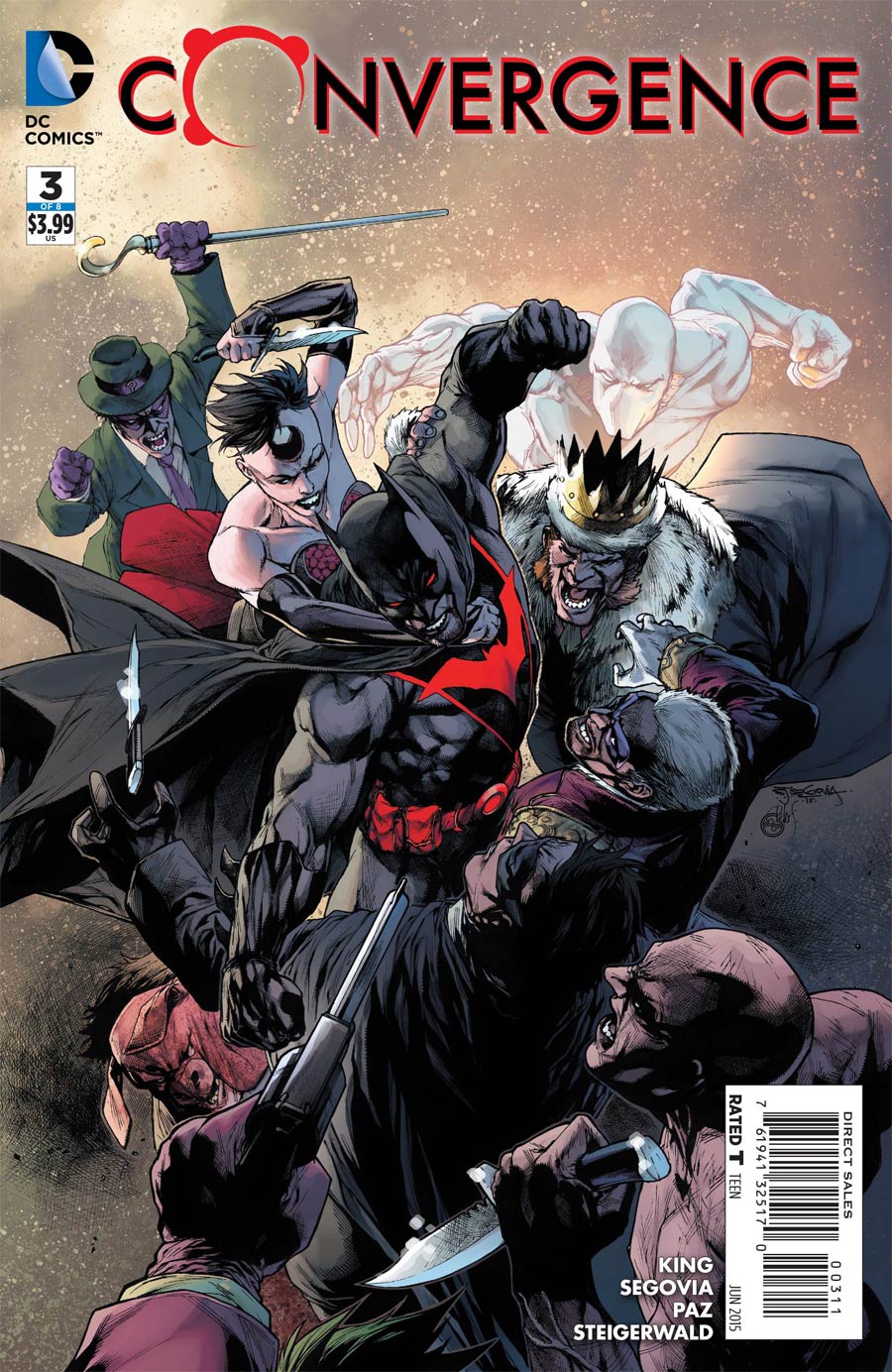 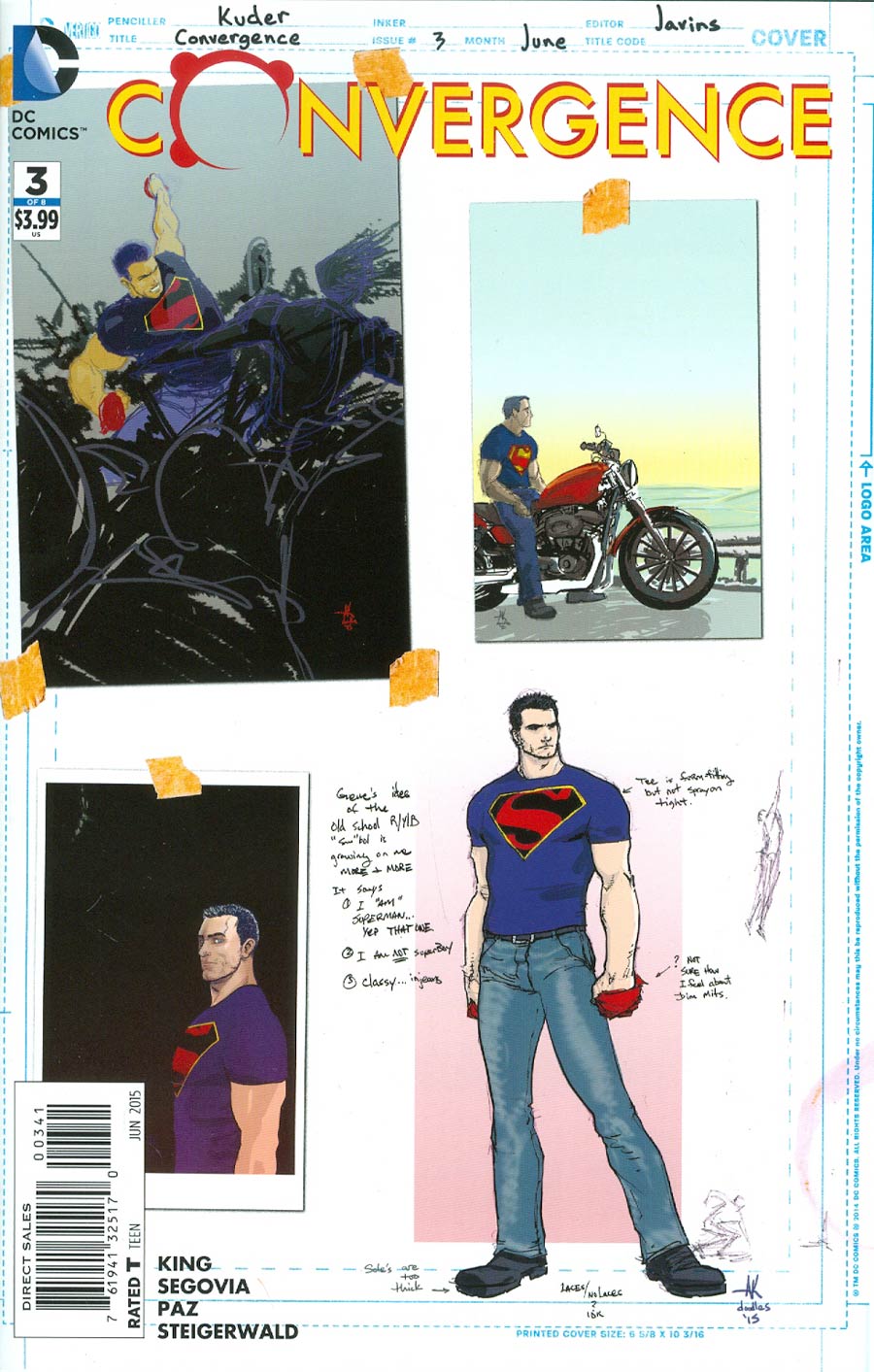 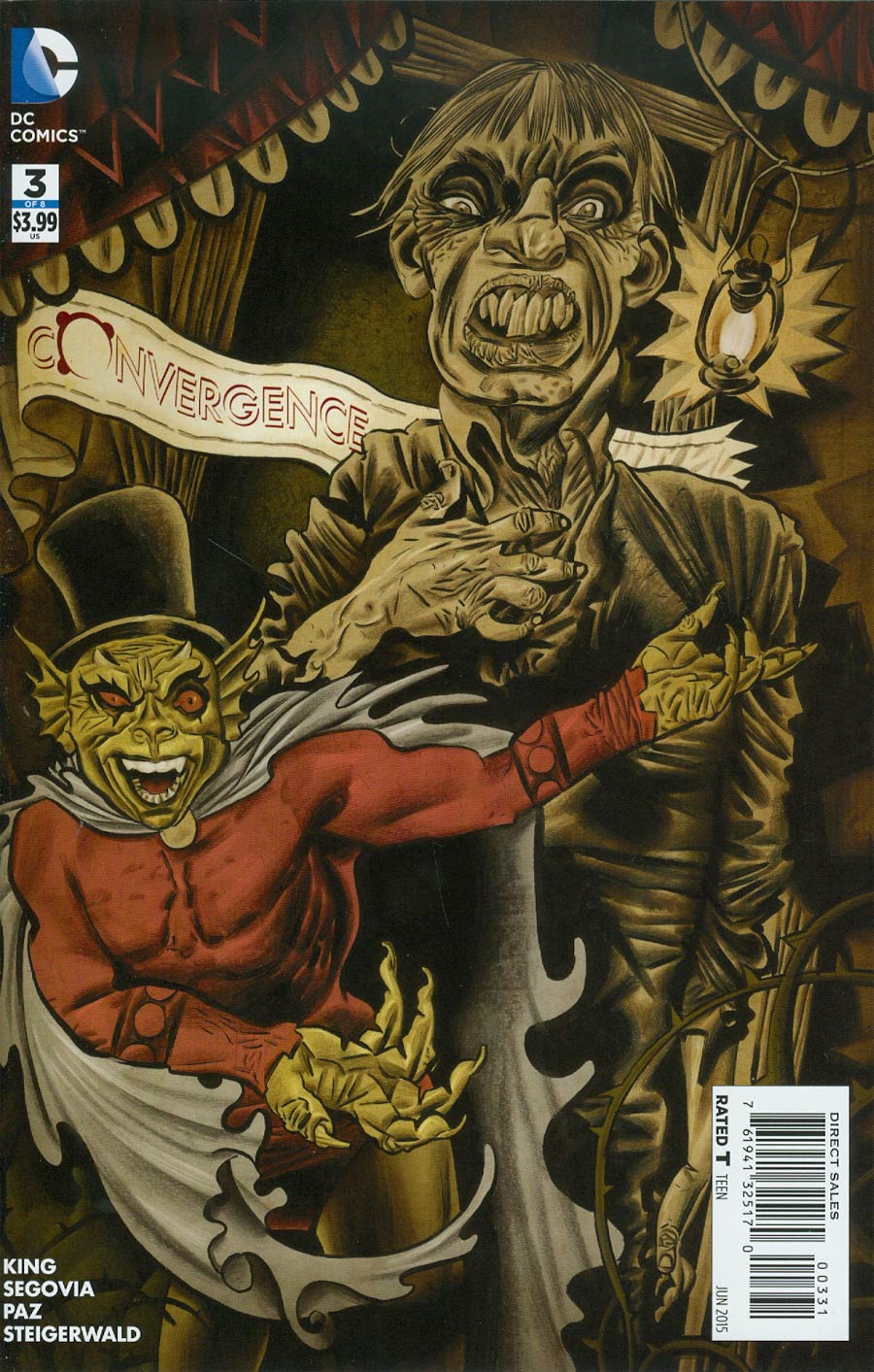 The Earth 2 heroes and Deimos are attacked by Brainiac's drones. Batman and Grayson save the day in Grant Morrison's flying version of the Batmobile.

Telos is upset at the city of Kandor because they refuse to fight. Telos murders the Kandorian hero Nightwing, then destroys the entire city.

Deimos tells the heroes he was captured by Brainiac. He can lead them back down into the planet where he was held. Within the core, lies a city called Skartaris. It holds an advantage over Telos. Batman and Grayson stay behind.

Monarch, Degaton, and the Masters of Time, are captured somewhere inside the planet.

A gaggle of Gotham gangsters and gunmen drag Grayson away, and attack Batman. Thomas Wayne (an older Batman) has been keeping up with the younger heroes by taking a drug called Miraclo. He is out of injections. Outnumbered, and his strength waning, he is about to die at the hands of Doctor Hurt. Batman pushes a detonator, triggering an explosive on his person. Batman and the villains are no more.

Grayson and Joker are the only survivors. Joker shoots Grayson in the side and is about to finish him off. Telos comes up from behind him, and snaps the Joker's neck.

Towering over Grayson, Telos demands to know the whereabouts of his teammates.

Story - 2: King introduces some new ideas into the story, but wastes too many pages on redundant plot points to explore them. Kandor is brought into the mix, the Warlord world of Skartaris is revealed as the key to defeating Telos, and Thomas Wayne (this story's Batman) dies. This should have been a great issue. Instead we are give nine pages of a battle with Brainiac drones.

Any good Brainiac, collector of worlds, story should include Kandor. Finally, and somewhat abruptly, the famous bottled city is added into the mix. We are even treated to the Kandorian heroes, Nightwing and Flamebird. Sadly, just as we are introduced to the characters they are killed. Nightwing is not even named in the issue, despite being dramatically impaled and assassinated. The entire city and civilization is unceremoniously destroyed four panels later.

King does not take the time to familiarize the readers with these characters or concepts. He has to get to the big finale of the issue. The death of Thomas Wayne. He could have redeemed himself with this sequence. He does not.

Thomas Wayne is sixty-five years old. He crusades as Batman by using Hourman's drug, Miraclo. In a one-page teaser before the scene, Batman tells Grayson that he is out of the drug. At his age, it will be impossible for him to continue. It is obvious he is planning to go out in a blaze of glory. But at that point - for dramatic effect - it is too late. To have the resonance that DC had hoped for, Thomas should have been the center of the issue. But with the exception of riding in to the save the day in the Batmobile, his death scene, is his only scene.

Like the abruptness of Kandor's introduction and elimination, Wayne's demise is foreshadowed quickly and obviously. It sours both the build up to the scene, and the realization of the scene itself. Not only is Wayne facing off against Pre-Flashpoint villains, not his own, he was also not allowed to develop any kind of previous conflict or tension with them. In the preceding issue, Thomas Wayne could have saved Bruce and Alfred from this group in the Batcave. A juicy scene, where Doctor Hurt swears vengeance would have added to the dramatic weight of the scene. As it is, there is no true tension. The reader just waits for the inevitable.

Then there is Joker's death. His neck snapped by Telos. Even if one decides to give King a pass on the deaths of Nightwing and Batman, it would be difficult to look the other way on Joker's ending. All three scenes come off as tawdry and garish, but this one is especially gratuitous. I have no problem with death and violence, but the trick to making murder work, is to employ the senses. Make the reader feel expectation leading up to it, and an appropriate emotion as a result of it. This death had neither expectation or emotion, instead, it was empty and meaningless. Not to mention that Joker's very appearance was Deus Ex Machina in reverse. (What is the greek for 'devil from the machine?')

If you are thinking, wait, all we got a pointless Kandor cameo, a confusing Warlord add in, and a major - but hollow - death... clearly you did not read my first paragraph. We got a nine page Brainiac drone battle.

Nine pages. A third of the book... wasted.

Art - 3: Keeping the same inker and colorist insured the artistic look and feel of the book stayed the same, despite changing pencilers. Nine issues in nine weeks is an impossible task for any artist, the strain showed in the previous issue. Editor Marie Javins tapped Stephen Segovia to fill in this week.

The art is serviceable. With the exception of Segovia's odd inability to draw mouths consistently, there are no major flaws. But the impetus for an artist's success or failure, is often what is not drawn. As mentioned above, King asks his artist to kill Kandor, Batman, and Joker, as well as show off a mythical underground city. He even gets to show Batman coming to the rescue in a flying Batmobile. But he underperforms at every turn. The effort is very workmen-like. There is no drama, wonder, or power to his rendering. Even his shot of a resolute Batman walking to sacrifice himself to save the others, is pedestrian. He often shrouds his faces in shadow, not for dramatic effect, but to save the time and effort it would take to do the panel justice.

Again, the mediocre score is not for what was, but for what should have been. The only thing that saved the art from a 2 was the fact that part of the problem lies with the script's plot and pacing.

Cover Art - 3: The reason for making the focus of the cover Batman (and his not-so-secret death) is to create tension and suspense. This cover does not do the job. Instead, Reis shows Batman valiantly holding his own. It is a cover not unlike dozens of others. Batman fighting a bunch of villains. If the contents were the same as dozens of other Batman books, then fine. But it is not. Since Batman dies, and the (obvious) idea is to ratchet the tension, this cover should be different.

Come right out and hold Batman down, with Doctor Hurt holding a gun to his head. Show Batman alone, crouched with empty vials of Miraclo littering the ground. Put a detonator in his fist, and reveal a pack of explosives strapped to his chest. Anything to help the lack of story building inside.

This cover is like the story underneath it, a long fly out to deep right field.