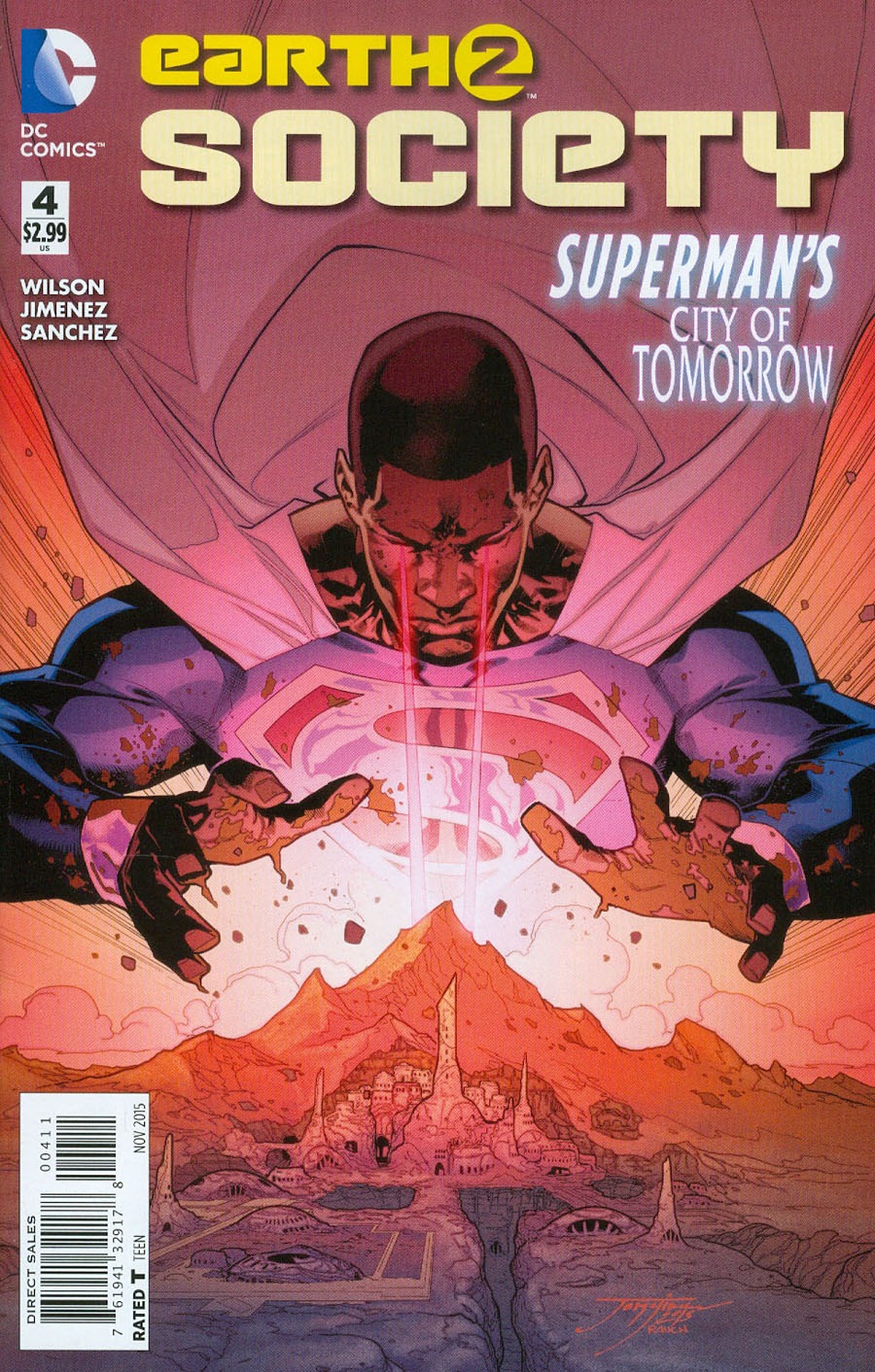 Scheduled to arrive in stores: September 9, 2015

Click to enlarge
Val-Zod, Earth 2's new Superman has been hiding in Nexus, a city he's been building. Dick Grayson believes that the Man of Steel murdered Terry Sloan until the truth is revealed. Superman and Power Girl were investigating a bombing when Wesley Dodd's Sandmen were asking for a crowd to disperse after Anarky disappeared from the scene. Knocking out the Sandman, the pair of Kryptonians use his teleporter to go to TSS Overwatch-One to confront Sloan. They find that he's been using the Source Vault to terraform the ship and create new life forms. That isn't the only shocking thing Kara learns. Sloan has revealed that Val-Zod had learned to detonate the fire pits from the war with Apokolips by building them. These were the same fire pits in which Kal-El, the original Superman and Power Girl's father, had lost his life. In spite of the red sun being the dominant one at the time, (New Earth 2 orbits two stars - one red, and the other yellow). Kara leaves Val behind. Both Superpeople have broken hearts, and the new Superman has the blood of millions on his hands. For this reason he is in exile and vows to never take a life. This is what has been told to Batman and the Flash. However, the Man of Tomorrow may be forced to break his promise to himself before the quest for the assassin comes to an end.

Batman is asking Superman to help find Terry Sloan's killer. Yet before the Last Son of Krypton and the Flash can decide to aid the Dark Knight, Mister Terrific radios with a new problem. Overwatch-One has been hacked. Its engines are disabled, and the ship is on a collision course with New Earth 2's Neotropolis. Can Batman, Superman and the rest of the world's superheroes prevent the destruction of their new home, or will they be forced to seek out another Earth 2? Find out next month, Superman fans.

Story - 4: This title was off to a rocky start with its previous three issues, but this chapter was a vast improvement to the others in the series. I've said that this is a book with lots of potential. That's what's made me stick with it so far. This tale is not perfect, but at least the potential I mentioned is finally coming into the light. If Earth 2: Society continues in this direction, I'll be more willing to continuing reading and reviewing it. Granted, the pacing of #1-3 is a bit slower than this one, but I'm considering going back to those after perusing the fourth outing. I've thoroughly regained the hope I lost for this comic. Thank you DC, Daniel H. Wilson and Eddie Berganza for restoring my faith in Earth 2.

Art - 5: It's a pity more publishers aren't using Jorge Jimenez. Then again, that works to DC's advantage. He'll surely be a rising star in the months to come if his art continues to be this good.

Cover Art - 5: This is a pretty powerful image. I'll go as far as to say it's the best cover of this series so far.