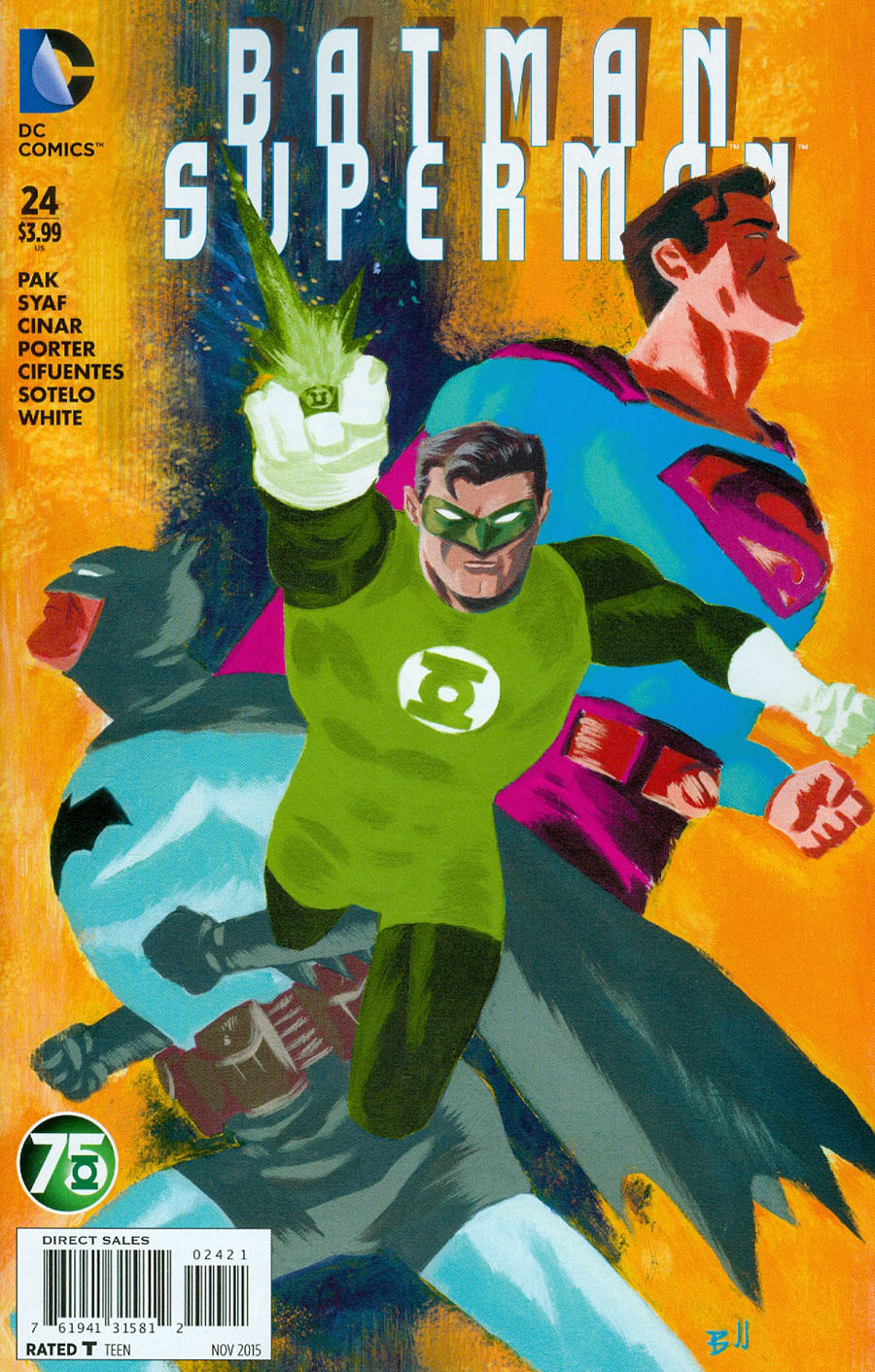 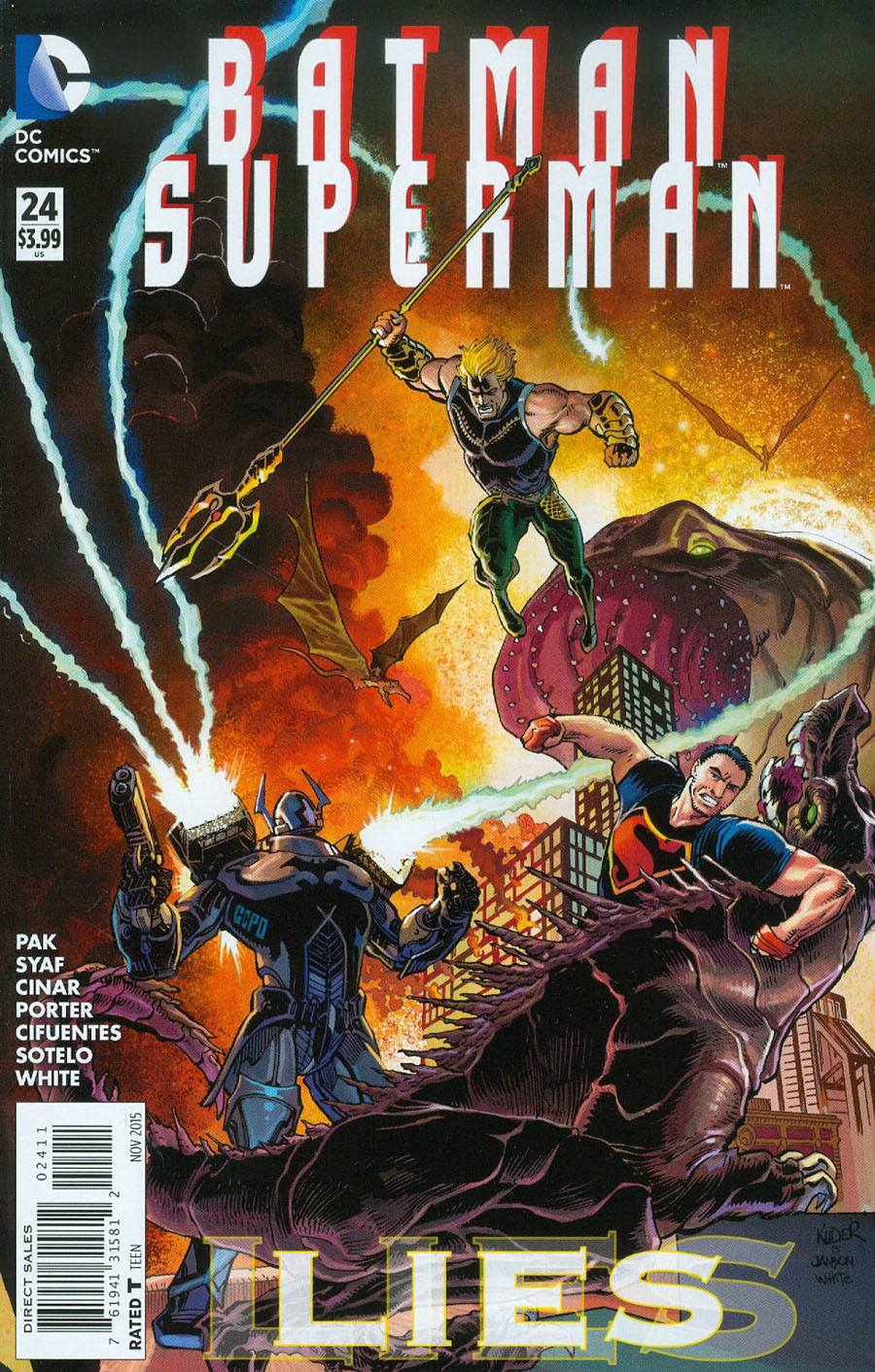 Scheduled to arrive in stores: September 9, 2015

Click to enlarge
Superman and the King of Atlantis do battle as Ukur and his soldiers race across the ocean towards the man-made sun. At first, Arthur doesn't realize that he is fighting Superman. Once he knows it's Kent, Arthur and Superman mock fight while they plan strategy. The super-powered King tries to convince the de-powered Superman to stand down, but Kent is having none of that. And he tricks Arthur into punching him so hard, that Superman takes flight towards the barge holding the fake sun.

Meanwhile, Batman and Fox are trying to evacuate the barge that is holding the unstable sun. Batman thus launches the sun into the stratosphere with Superman as an unwelcome stowaway. They bicker as Batman tries to steer the 'rocket' away from the Earth. But before they can get too far, a mysterious ship appears out of nowhere and steals the rocket with the unstable sun inside.

Below, Ukur's army disappears. Ukur roars in indignation as he realizes that he has been played for a fool. Our mysterious villains, who have been orchestrating this whole 'truth' tale, have won again.

To cap everything off, Gordon/Batman gives Superman the riot act. Apparently, Gordon blames all this trouble on Superman's very existence.

The story then transitions into a scene between a one 'John Clark' (apparently Clark's new identity) and a now retired Bruce Wayne. 'John' tries to convince Bruce that he is still needed in the 'fight'. But Bruce is convinced that he is needed more by the orphans he now oversees.

The ending reveals who is behind all this mess. I won't say here, because I don't want to spoil it for anyone. But he is one of my favorite villains. And apparently his goal is not only to defeat the heroes, but to break their spirits.

Story - 4: The Good: Finally! Things get interesting in this story. The action brings it! There is a lot less internal dialog in this issue. I like who is behind this mess. Chaos and anarchy are tools often used by this villain, his/her methods show an intellect that makes this character compelling. He/She is going to be a true challenge for Superman.

The Bad: It's a little shocking to go from issue 23 where all the action was happening underground to issue 24 where the reader is suddenly on open seas. It would have been nice to have a panel or two of transitional scenes. But the action moves quickly enough that the reader soon catches up with what is happening.

The writers either don't like Gordon and want to make him look like an ass, or they completely forgot that it was Gordon who attacked Ukur and started this whole war. Either way, Gordon's version of Batbunny putting down Superman was not easy to read. I personally wanted Superman to give the fake Batman a good solid punch in his over shinny face.

Art - 4: The inside art is clean and well done. The art work is mostly raucous and violent from beginning to end. I like that. The story advances quickly, and from panel to panel, the viewer hears the crunch of fist against jaw bone. You can see Superman flailing as he is sent sailing into the air by Aquaman.

And you can hear the roar of the engines as the fake sun is launched into the air.

I would give the art a '5', but the transition between artists is too jarring. Each artist does a great job, but the art should flow from page to page without shocking the reader.

Cover Art - 3: As often happens, the cover art has little to do with what is inside this specific issue. I never like it when the artists do that. Also, it's a bit messy and looks like it was rushed. Maybe there are just too many artists trying to fit too much into one picture? Maybe?