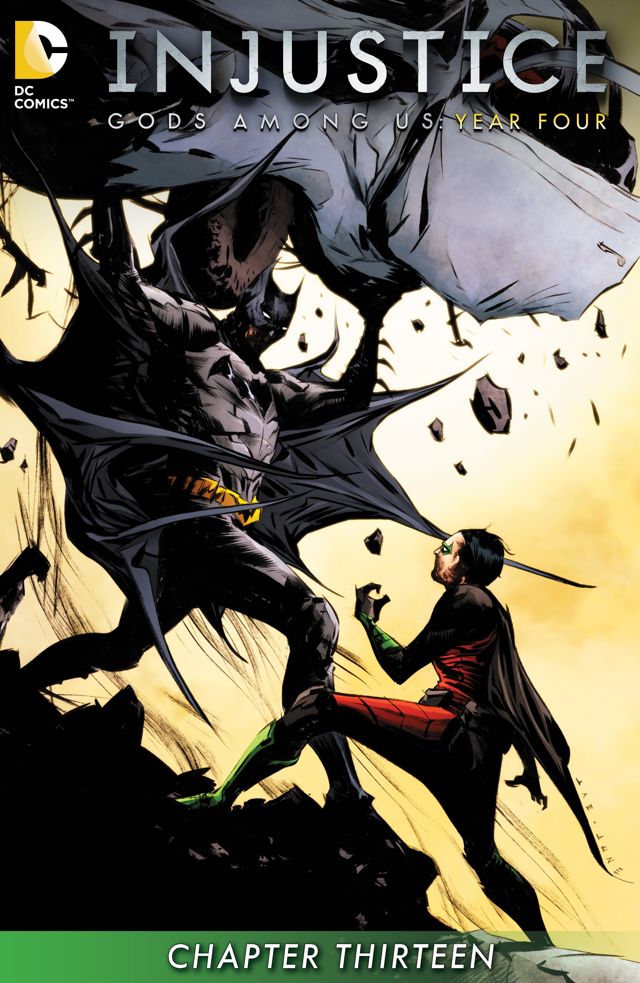 Click to enlarge
Zeus discusses the events that are transpiring on Earth with Hera, and realizes that Ares alone benefits from the fighting. Shazam, newly freed, races to the battle at the Hall of Justice and provides succor to the greatly overpowered Justice League. Shazam contends with Hercules, while Wonder Woman is nearly killed by Batwoman... who changes her mind. Regime Superman recovers while adrift in space, and impacts Hercules after speeding in from orbit. A feat which may or may not have killed the son of Zeus, which instantly alerts his father who will certainly become involved and bring thunder and lightening with him.

Story - 2: The fighting continues. It's curious to imagine how the last few issues would play out in standard comic book form, with all this melee and no movement. The majority of Year Four has taken place on the steps of the Hall of Justice, comprising a fight that won't start, yet won't end. The battle that should be taking place is with the Insurgency, but they've been owned and reduced to less than side-line players, except for the obligatory self-righteous scene on the part of Batwoman. That Batwoman won't kill Wonder Woman, after the death of Huntress and Renee Montoya reduces Injustice to black and white formulae, as opposed to the supposed grey area and blurred lines the book purports itself to be. Super-powered heroes bad, crime fighting heroes good. What's more, Wonder Woman just pushed Regime Superman to the brink; Why is she having such a hard time with Batwoman, warrior extraordinaire that she is?

I have loved Captain Marvel since I was very young and know the character very well. However, Shazam seems to operate by different rules. Captain Marvel's powers were bestowed by the gods, one hero, and a biblical king. Aside of Solomon and Achilles, the other gods were all present. Hercules could have just revoked his power, and game over. Sure, the fight is what most came to see, but why should Hercules suffer Shazam? Why, when Shazam believes the "H" is his and not Hercules'? I love a good donnybrook as well, but the best are well-thought out, and this? I've seen better battles for a spot on the toilet queue.

Art - 4: Redondo is a welcome sight. Miller needed the time off, and we get some great facial expressions, and a splash of Shazam belting Hercules that is pretty cool, even if it makes no sense.