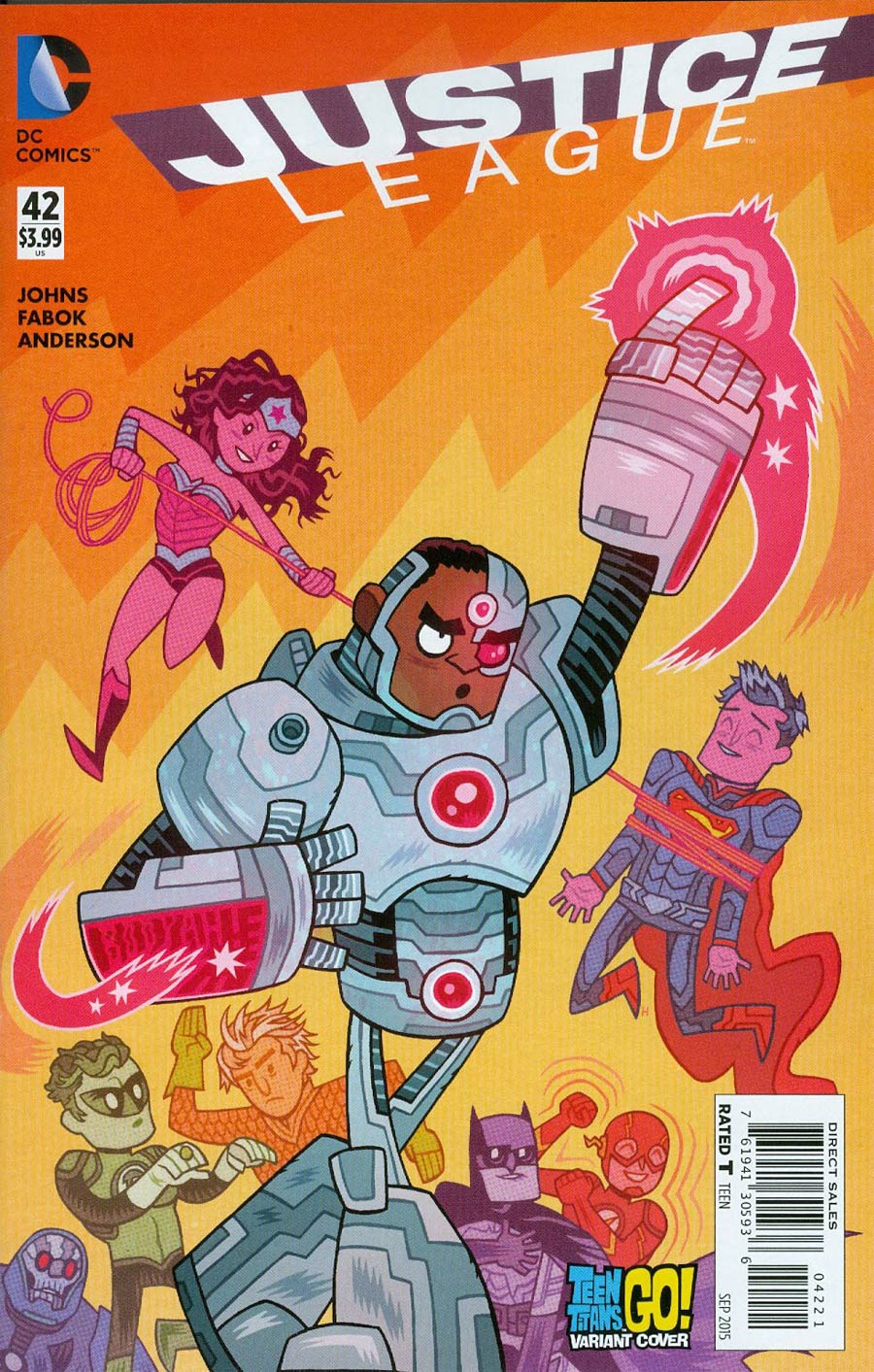 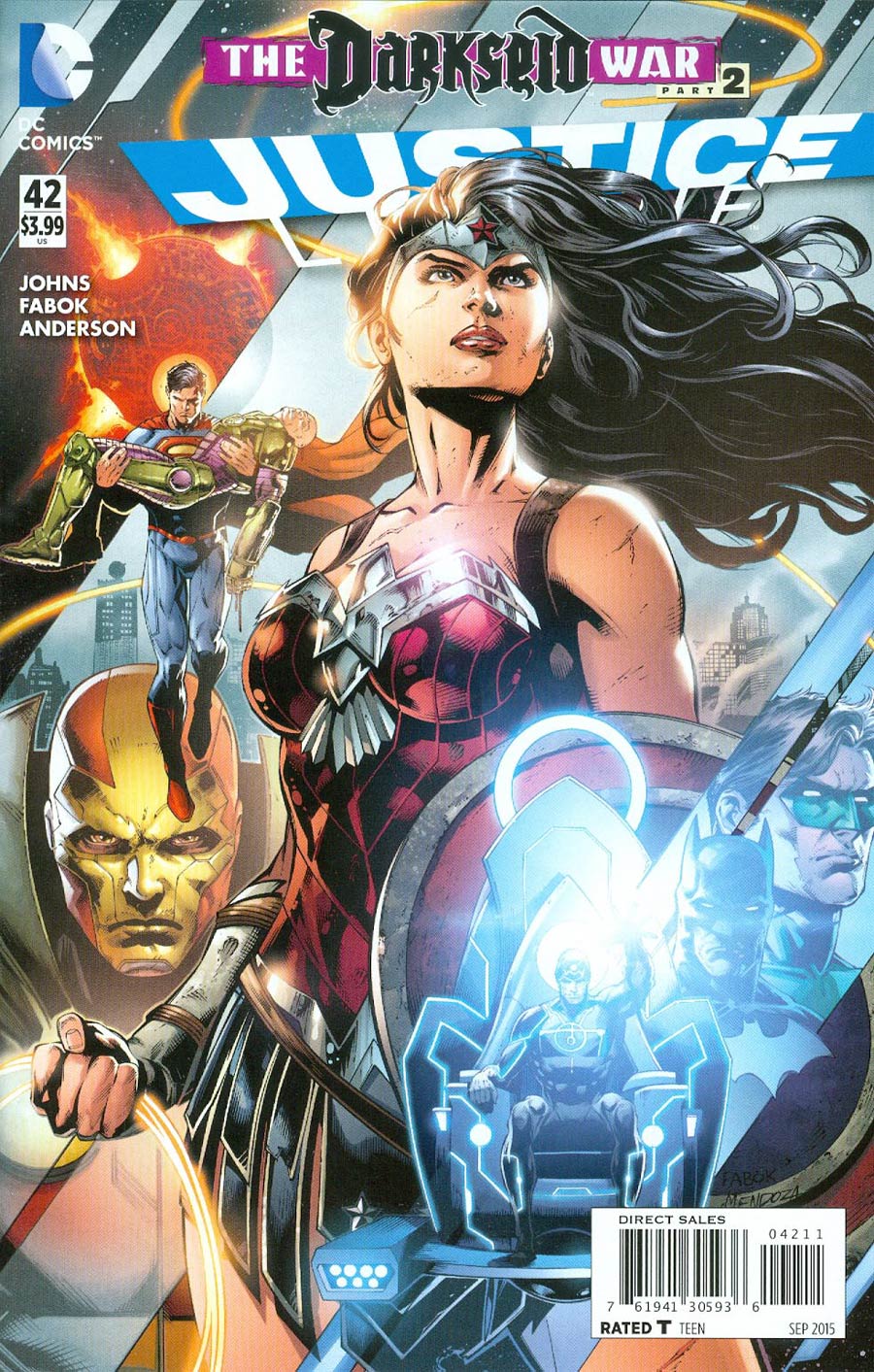 Click to enlarge
Superman and Lex Luthor have been transported via boom tube to Apokolips. Darkseid is aware of their presence, and sets a plan in motion to turn Superman to his will. On Earth, Wonder Woman and the Justice League observe the Anti-Monitor, blotting out the sky, then battle ensues against Darkseid's daughter, Grail. Metron arrives and spirits the League away before it gets underway, and Grail vows to find them. Mister Miracle is taken in by Myrina Black, but their coexistence is brief, after she decides to attack for not agreeing with her. Metron takes the League to the Rock of Eternity. He won't give the League information on how to stop the Anti-Monitor, and once Green Lantern and Metron himself alert Wonder Woman that his chair is the source of his knowledge, she wrests him from it. The chair is about to enter a boom tube, but the Batman takes a seat upon it before this occurs. He is suffused with the energy of the Mobius Chair, and know knows the answers to everything. He tells the League not to be concerned for him, for he is a god now.

Story - 3: The issue suffers from the massive opener that proceeded it. The length is much shorter, and with the amount of events taking place, it feels truncated. The amount of time and space given each of the dueling narratives, clearly demonstrates where the impetus and focus of the story is, but if that's the case, the story need not be sectioned into thirds to accomplish what could be done in standard plot/sub-plot form. If the idea is to entice the reader, then there's no small amount of success there. However, titillation aside, it's short shrift to be given readers so early in the story... and one that will be expansive. In truth, the supporting one-shots that will accompany Darkseid War are very much needed, as it's obvious from this issue that there is too much story to be told, than can be accomplished with the standard page rate of a monthly comic. Even then, with said support in place, it will interesting to see how the sequencing is affected with those outlets, especially for readers who chose not to pursue that option.

The Batman becoming a New God is both ironic and risible. He's been a god for some time now, and his seating on the Mobius Chair conforms this. Batman used to be the supra-man, the character who could surpass human limits, but still was bound by those limits. He could survive being shot by a gun, but a bullet could still kill him. That was done away with the Mary Sue him into oblivion, in an effort to have him contend the gods and situations where even a supra-man had no business being. Batman sits on the Mobius Chair, and now has the knowledge of the universe at his disposal. His questions? Who killed his parents and who is the Joker. Seriously? The World's Greatest Detective doesn't know this all ready? What's more, it's so self-centered. You would think that Batman would ask "How do I clean-up Gotham?" "How do I stop crime world wide?" No, he's no longer the man who has that on his mind. He just torture, his parents death, and the torturer, the Joker, at the forefront of his thoughts. Previously, Batman would have rejected this type of power or at least been very uncomfortable with it. Here, he becomes Metron, a cryptic and self-interested I less than a minute, sitting on his godly throne, looking imperious much, much too easily. Bat fans will emit their approval, but it's hard not to see what's been lost with a character who's draw was that he was a man, and that was good enough.

Art - 4: Fabok is in the interesting position of turning solid line work, that just isn't interesting. Except for Wonder Woman.