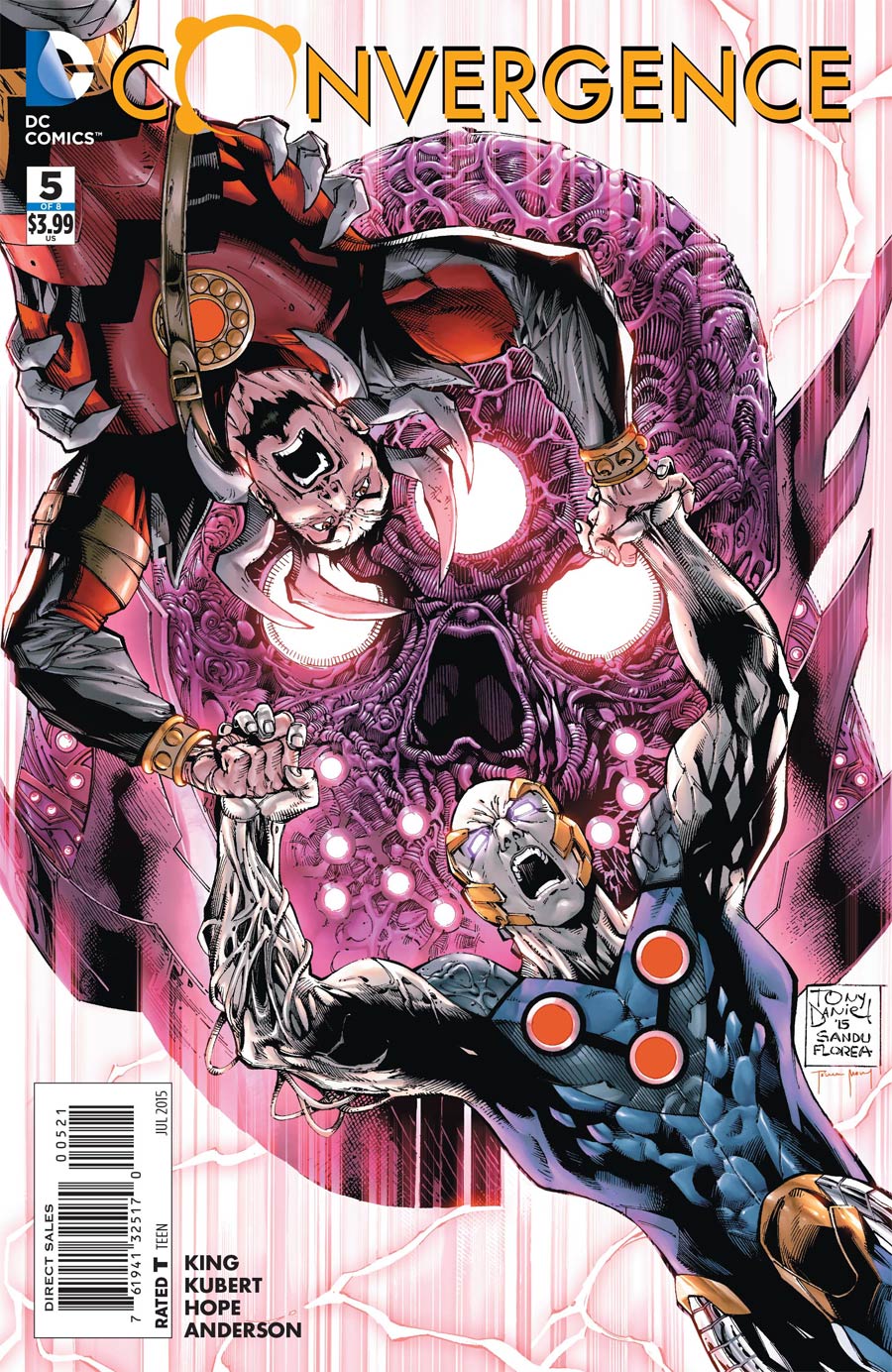 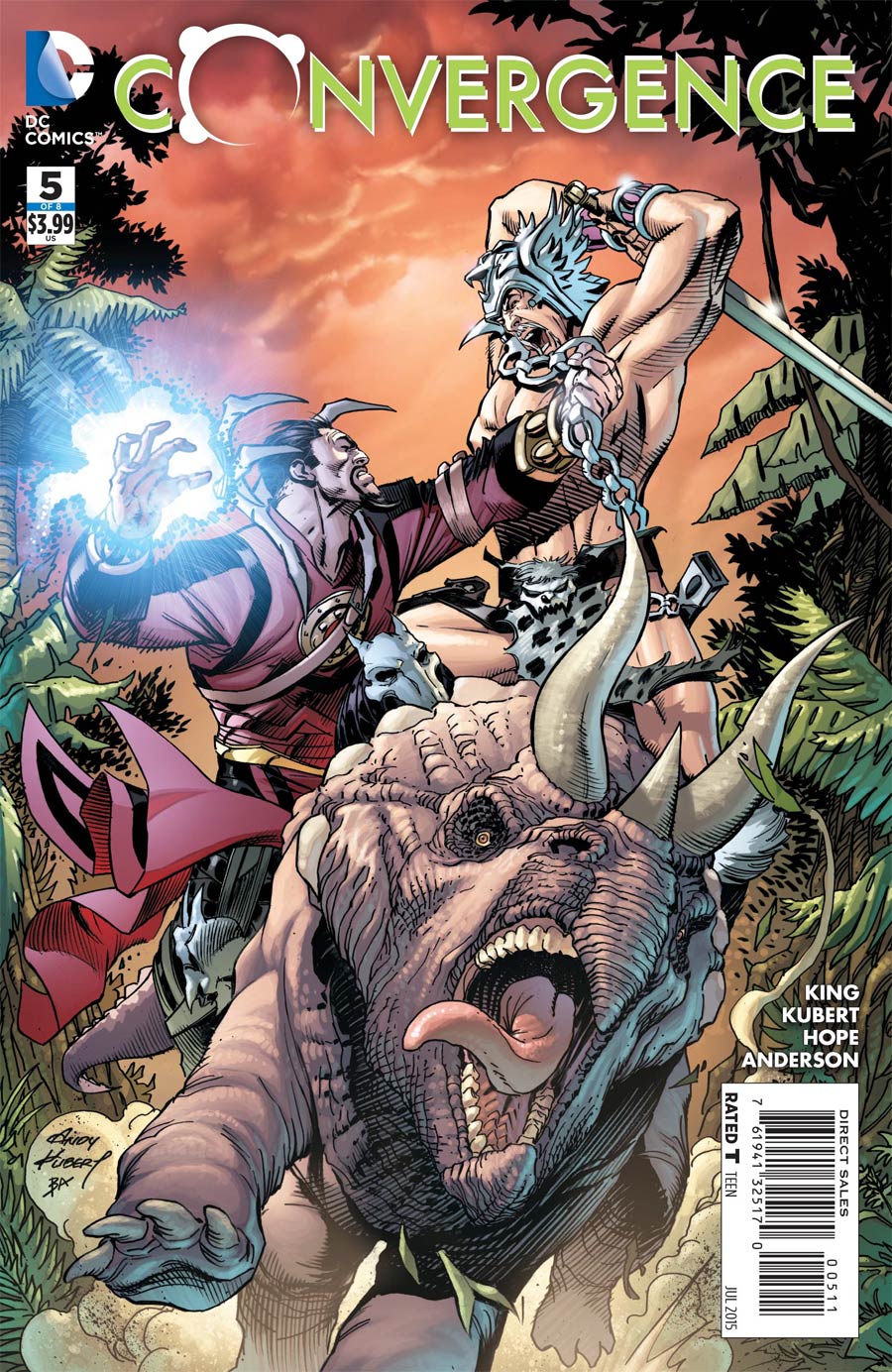 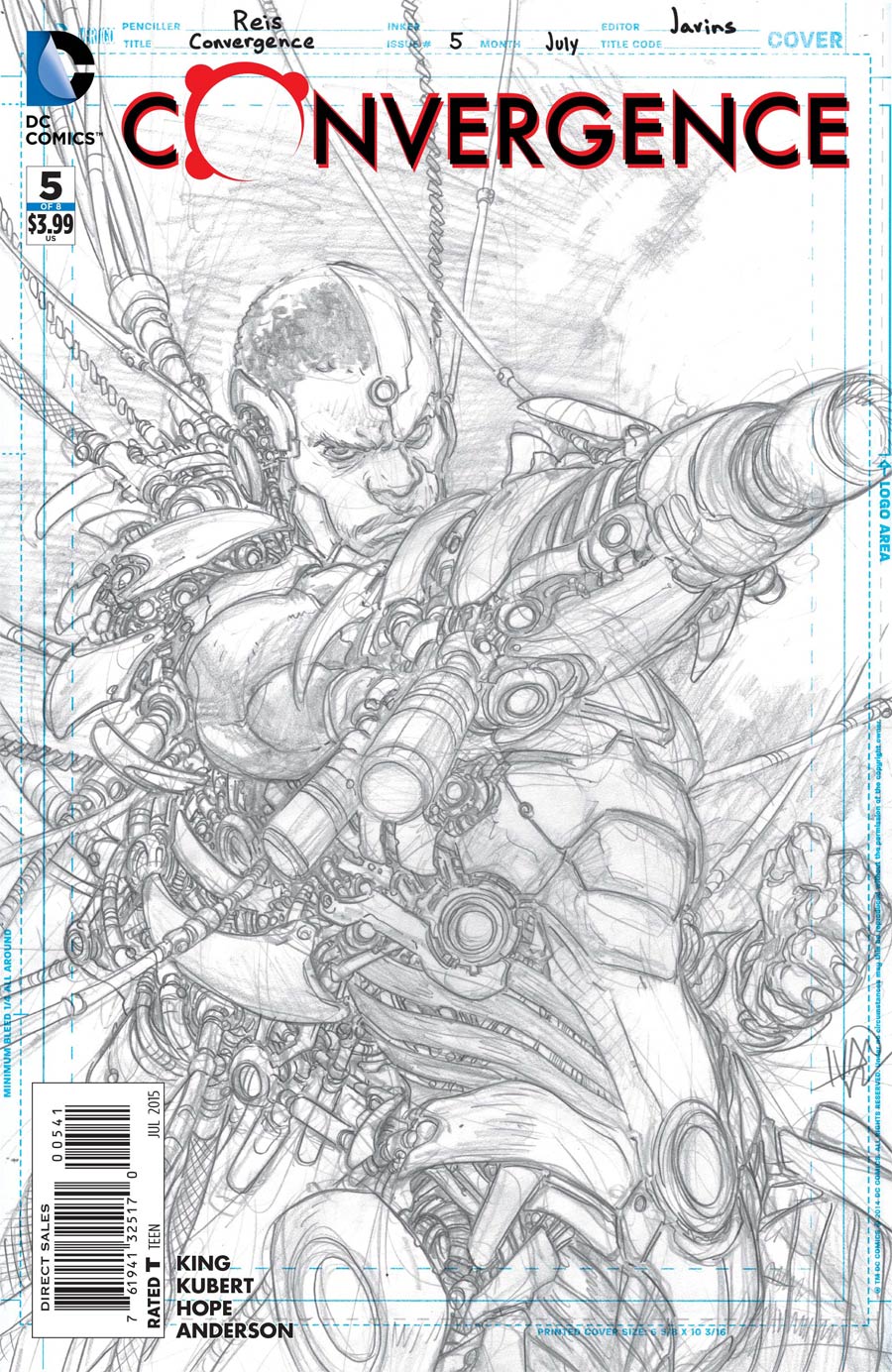 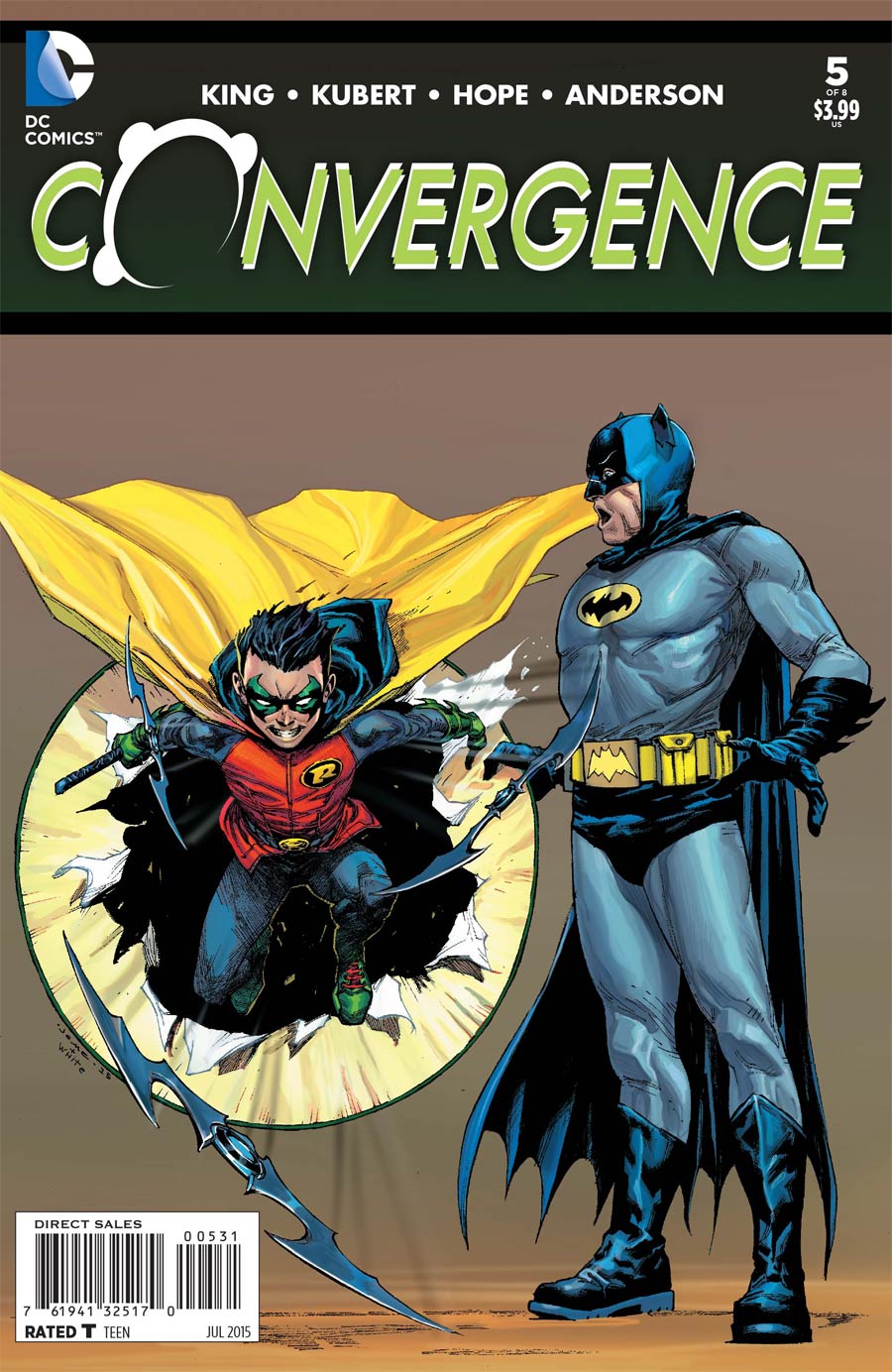 Unbeknownst to Telos, he is not the planet incarnate. He is not an avatar created by Brainiac. Telos is like everyone who has crossed paths with the collector of worlds. His home planet was attacked by Brainiac. One difference, they struck a deal. Telos would rule the planet, but serve Brainiac. In exchange, his family and people would be sent away to safety. Telos' appearance is transformed and the planet is razed in preparation for the convergence.

Traveling back to their castle, The Warlord and his wife Tara are attacked. A lizard man thrusts his sword straight through Tara's abdomen.

Machiste takes the offensive, but Deimos pulls a 'Temple of Doom.' He reaches into Machiste's chest, and yanks out his heart out with one hand. Superman and Deimos grapple.

Warlord kills off the Lizard men. He vows to his wife that he'll return with help, or 'join her soon.'

Deimos takes Superman and the Flash out. The heroes contemplate releasing Brainiac for help in battle. Before they decide, the sorcerer relegates the villain back from whence he was conjured.

The Warlord rides a triceratops, stampeding through the wall. Like all other attacks on Deimos, it is a futile attempt. Deimos places the king in a chronal bubble and accelerates time, killing him of old age.

A cave-in separates Yolanda from the other heroes. Flash goes back to find her, while the rest split off. Grayson finds a discarded batarang. He fastens it to his chest, taking up the mantle of the Bat.

Deimos and Yolanda are left inside the castle. He tells her of her past life as the successor to Wildcat in the original Crisis. He plans on bringing the old universe back. (It is unclear if he is referring to restoring Pre-Crisis or Pre-Flashpoint continuity).

Deimos communicates to the refuge cities of Telos. He tells them there is no more need to fight. They will all have a place in his new reality. As long as they pledge their lives to him. He has saved their lives, and he will protect them. For a price.

Story - 2: This could have been a good issue. Story is change. We have a change in antagonists, origins, and circumstance for the domed cities. In this, the sixth issue, the story is finally moving.

But for all that occurred, the writing is hackneyed and amateurish. The villains lack motivation and deaths lack meaning. The heroes are not heroic, their dialogue is vapid. Even scene changes lead to continuity holes.

Deimos wants to rewrite the multiverse. (He appears to be a big Lois and Clark fan. Not sure if his appreciation stems from the TV show or comics. ;)

This 'Superboy-Prime syndrome' can be insulting. After all, it is a swipe at paying customers. The trope consists of a villain playing the role of the 'whiny fanboy.' Someone who pines for a comic-age gone by. But as long as it is not laid on too thick, I can live with a 'fanboy-like' villain. It is the inevitable breaking of the fourth wall that is a problem.

Yes, referencing hot-button issues like Lois and Clark, can elate or frustrate readers. But there is a literary concern. It reminds us of how steadfast editorial remains on the changes. Therefore, we know the villain will not get his way. Thus, the real world intrudes on the fictional. The power of the scene is robbed.

(And by the way, how would Deimos know about Lois and Clark? More importantly, why would he care whether they are together or not?)

The question is why Deimos wants to recreate the cosmos. He has always had a simple goal. He wants to rule Skartaris. But King pulls a switcheroo. And that's ok. Goals can change. As long as Deimos has a good enough reason, the story is better for the twist. The problem: Deimos never once hints at what that reason might be.

King kills faster than a speeding bullet. Unfortunately, the deaths are nowhere near as powerful as a locomotive. Warlord is almost a complete unknown. King includes him anyway. That is fine, but the character dies after having hardly been used. Why not take advantage of having a character who has not been worn out by overuse?

People have differing opinions on Geoff Johns, but he excels raising the profile of little used characters. Johns would not have killed Warlord. Instead, the hero would be captured. After the inevitable escape, Warlord would help save the day. A high point in the story. Fans would be pumped for a Warlord revival. And DC would oblige. They would make a little money, and then (to be honest) cancel it.

The Warlord's wife is killed just as carelessly. Tara's death is meant to motivate Warlord. But for motivation to be effective, it has to push both the character and reader. The typical reader does not care that Tara is gone. She is featured in only a handful of panels.

As far as storming the castle, killing a woman to motivate a man is sure to upset a vocal part of the readership. (Understandably) But the problem can be boiled down even further. Warlord already has all the motivation he needs.

His archenemy overtakes his lair and burns his kingdom. Warlord and Tara are literally on their way to oust the faux potentate when they are attacked. Killing Tara gives Warlord too much motivation. While Deimos has none.

Oh and Machiste... We are not even told who he is. Movie extras die more substantive deaths.

One problem that persists throughout the series is dialogue. I have yet to broach the subject, but each issue is good for a line or two that sticks out. This week, the Flash charges Deimos. He attempts to rally the troops, "get in there guys-" (The heroes do not move by the way, they stand like rubberneckers) "-while I do my thing. And my thing is running."

Forget the fact that everything about the Flash is running. His costume, movements, pattern of speech, and fighting style, but he is running while he says it.

If King were writing for White Collar, he would never pen something so on-the-nose. Even more to the point, he would never have his character tell others that he is going to run, as they watch him sprint down the street. I am not sure how this mistake is made unless King is either 'mailing it in,' or has no respect for the medium and its readers.

The dialogue is even unintentionally humorous. Green Lantern realizes that they need help to defeat Telos. So he asks the team, "Should we try to release Brainiac?" Brainiac immediately responds, "Yes."

Read it yourself. It is genuinely, but unintentionally, funny.

At first glance, this story is a major improvement over most of the series. Upon closer inspection though, it is another sad attempt to prop up a decent idea with little substance or execution. I wanted to grade this higher than a 2. However, as the story ramps up, the quality dips. I was not sure that was possible. But here we are.

Art - 4: Some artists are better on an off day than most are on their best. Adam Kubert might be one of those talented artists. At least, his less-than-stellar effort is certainly better than the previous penciler.

His facial expressions are very good. (And they can actually be seen, which is an improvement from the previous two issues) But his blocking and body language are sometimes off.

At times, the body language makes an argument look like an agreement. Other confrontational panels fail to face two feuding characters toward each other. It may seem like a small criticism, but these issues are like a slashing a tire. The tension gushes out of the scene quickly.

The most awkward visual moment is a two panel Machiste sequence. Instead of a right hand, he has a steel spiked ball grafted onto his wrist. He has always been this way, but it is not exploited here. His one chance to show off (right before his death) is instead, a display of this cumbersome appendage.

Part of the problem is King. His script asks for Machiste to catch Deimos' fist, and stop him from punching Telos. The fly in the ointment? Deimos is right handed. Machiste, by circumstance, is most definitely left handed. There is almost no way pull this off smoothly.

It is the perfect opportunity for the veteran artist to email his comic writing debutant. He could say, 'Hey, this isn't going to work. Luckily, I've got a fix that will be cooler anyway.' Instead of catching the punch, Machiste can swing his 'mace-hand' square into Deimos' fist. Break some knuckles. Break some fingers. That way the hero can go out like a tough guy, instead of his offhand exit. (Pun intended) :)

Kubert can do better than this, but considering what we have been given from King and the architects of this event so far... It doesn't matter.

Cover Art - 5: Deimos and Warlord battle while riding a triceratops. Pretty cool. This is the most dynamic cover we have seen yet. It also exposes us to the story developments inside. The tease adds some needed excitement.

One problem. The dinosaur's left hind leg. It is under rendered, and out of socket. But hey.