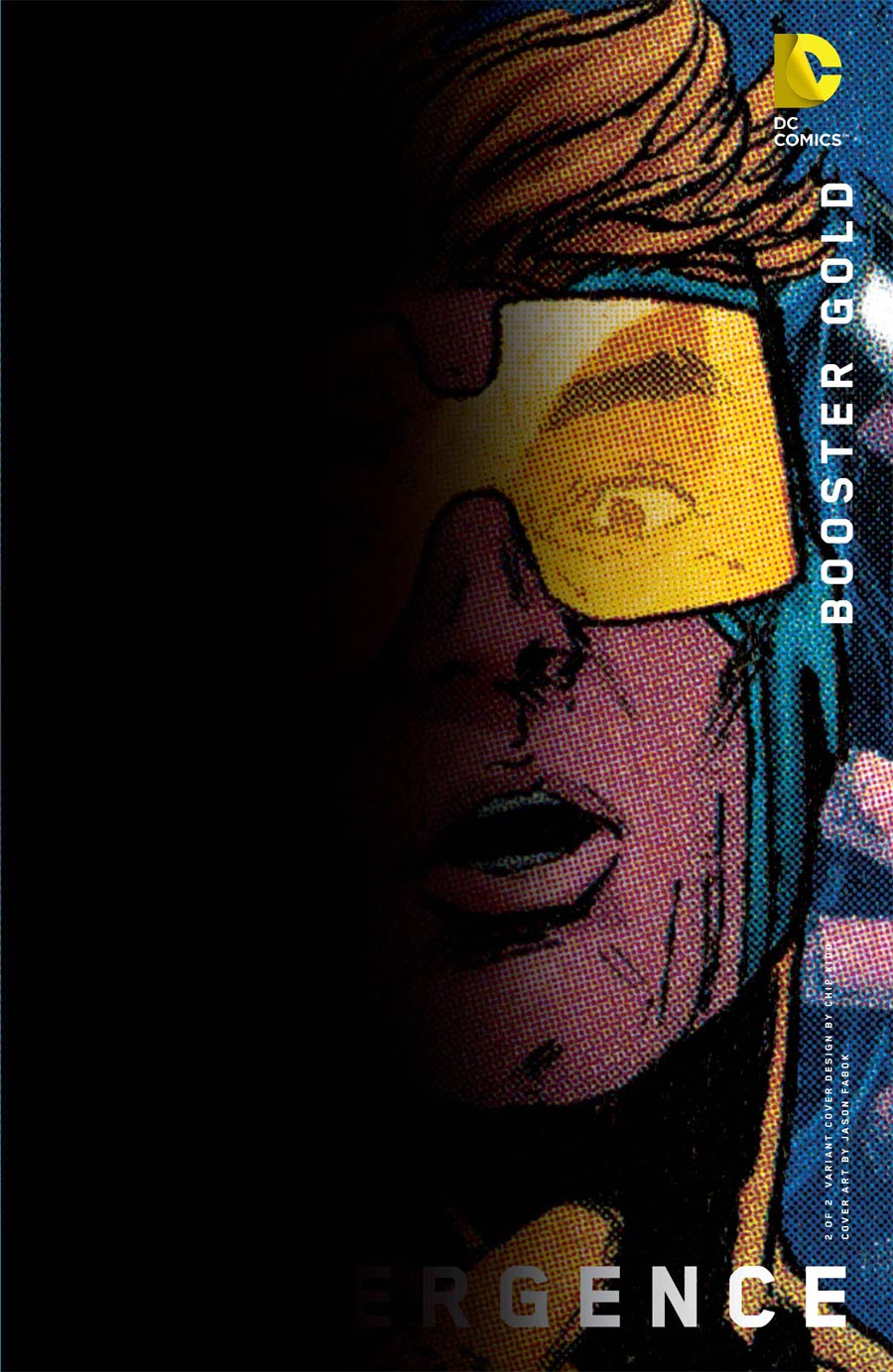 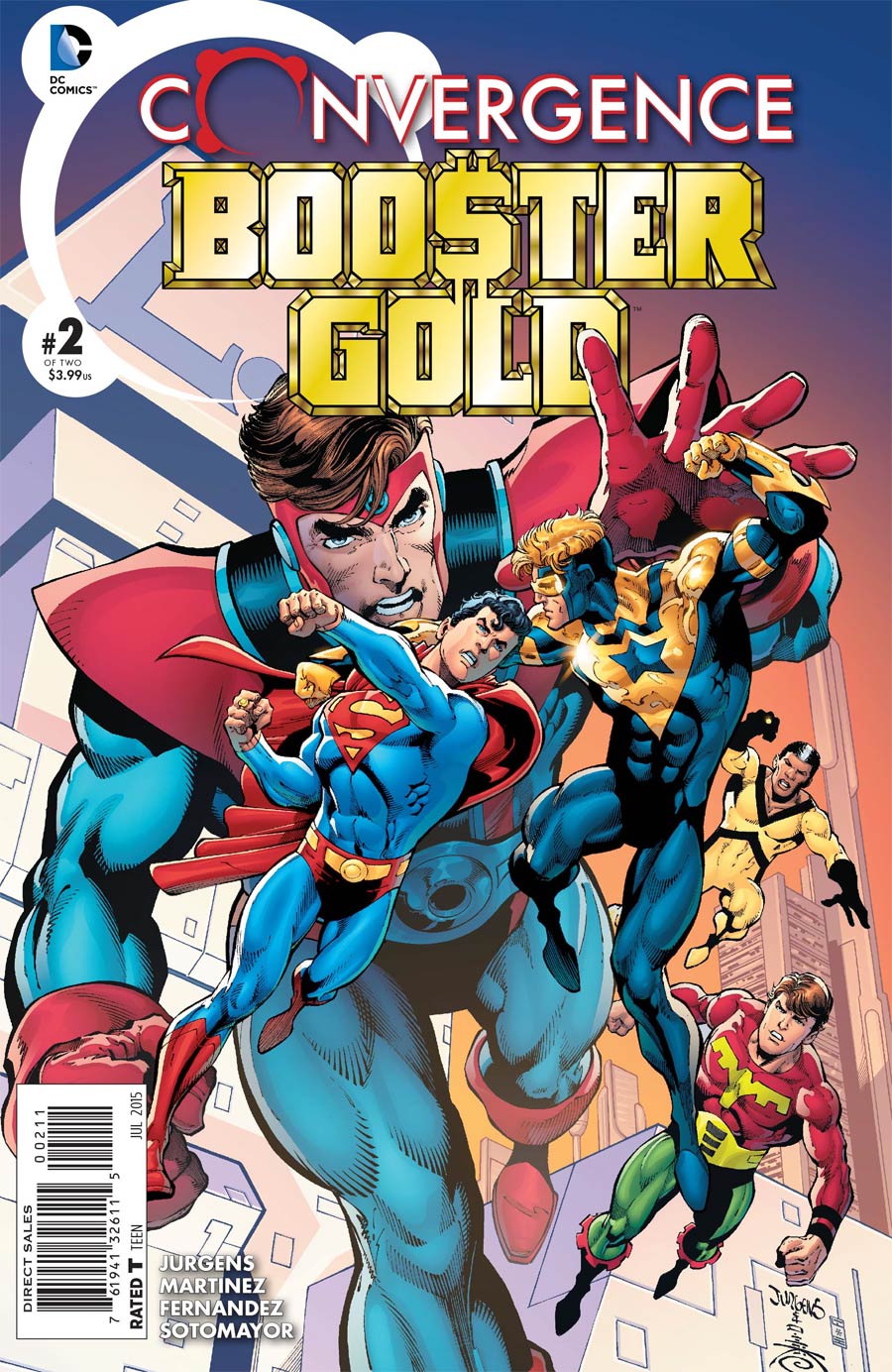 Click to enlarge
An older version of Pre-Flashpoint Booster Gold is shocked to see his old friend, Ted Kord alive. He is elated, but remembers Ted's fate at the hands of Maxwell Lord. He warns Ted not to trust him.

Booster is in pain. Blue Beetle lifts him into the Bug, and takes him to Kord Industries.

New 52 Booster Gold, Pre-Flashpoint Rip Hunter, and Michelle Carter are face to face with Superboy and the Legion of Superheroes. Colossal Boy throws the first punch. The two sides scuffle. Superboy brings the fight to a stop with an imposing show of power.

He wants answers, but Rip triggers a gadget on his belt. The trio are transported forty-five minutes into the future. Skeets locks onto future Booster, and the group pursues.

At Kord Industries, Ted pumps Booster for details on his future. Booster denies him. He tells Ted that his situation is hopeless. He is dying.

New 52 Booster, Rip, and Michelle teleport to Kord's lab. Rip has an idea that could save the rapidly deteriorating Booster Gold. But he will not hear of it. When he collapses, though, his concerned friends go ahead with the plan anyway.

When the sickly Booster is placed in the vault, the surging chronal field merges with his body. His corporal form is no longer. He is transfigured into the Waverider.

Pre-Flashpoint Michael Carter, the new Waverider, teleports his friends home. He races away to the planet Telos to stop the destruction of time and space.

To be continued in Convergence #8.

Story - 4: Dan Jurgens knows what fans like, and he gives it to them. Booster Gold and Blue Beetle. The Bug. A nice moment for Superboy. Acknowledgment of past moments and origins, such as Ted's death, Jonn's love of Oreos, or how Booster came into the possession of a Legion flight ring.

Jurgens does repeat a problem from the last issue, though. Heroes on the same side, fighting. All because they are too hot-headed or impatient to determine whether they are facing a friend or foe. It may make sense for some characters, but not most of the ones featured in this tussle.

This clash of misunderstanding is particularly odd, because the same thing happened in the last issue. The fight stopped between issues, and then restarted just as foolishly. A double fault on Jurgens' part.

The Legion has no real reason to assume that Booster and co. are responsible for the dome. On the other hand, why is Rip so reticent? Instead of talking, he teleports out. He has a time machine in his hand. He has all the time in the world. Why not recruit Superboy and his teammates?

In a rare treat, Jurgens shows the reader more than just the monitor room at the Vanishing Point. I would love to see a guy like Grant Morrison set a few stories in that place.

Jurgens gives a better explanation of Deimos' plans than Jeff King does in Convergence proper.

He also uses his role as one of the architects of this event to reintroduce one of his old characters. He repurposes an out-of-continuity Booster Gold into the new Waverider. It is a nice surprise. (Plus, a couple more dollars in your royalty check is never a bad thing)

The biggest problem with this issue is shared by nearly all Convergence tie-ins. It is footnote to the main story. The only place the narrative truly goes, is directly into Convergence 8. If its dependance on another title were not bad enough, Convergence writer Jeff King barely uses Waverider. He advances to plot, then fades out of the story after his two page appearance. Not quite the conquering hero Jurgens builds him up to be.

But ultimately this story, like so many other tie-ins, is more fun and satisfying than the miniseries it springs from.

Art - 4: Nice artwork all around. Blue Beetle, Waverider, and the settings all look great. Martinez is given plenty to work with. I would assume artists like to draw other penciler's scripts. Certainly Jurgens knows how to visually pace a script and give splashes and moments the gravitas they deserve.

The older Booster ages before our eyes. Good work.

Most everything is simple, clear, and pleasing.

Cover Art - 2: Publicizing Superboy and the Legion is probably not a bad idea sales-wise. (after all, it got us to review these two issues). But the heart of the story, or theme, is no where to be seen on the cover.

It appears that both Superboy and Booster have missed their targets, throwing fists like windmills, instead of fighters. Look closely, and you will see that Booster seems to have a broken left leg. Come to think of it, his right doesn't look so hot either.

But it is Jurgens, Superboy, and the Legion. So at least that's something.