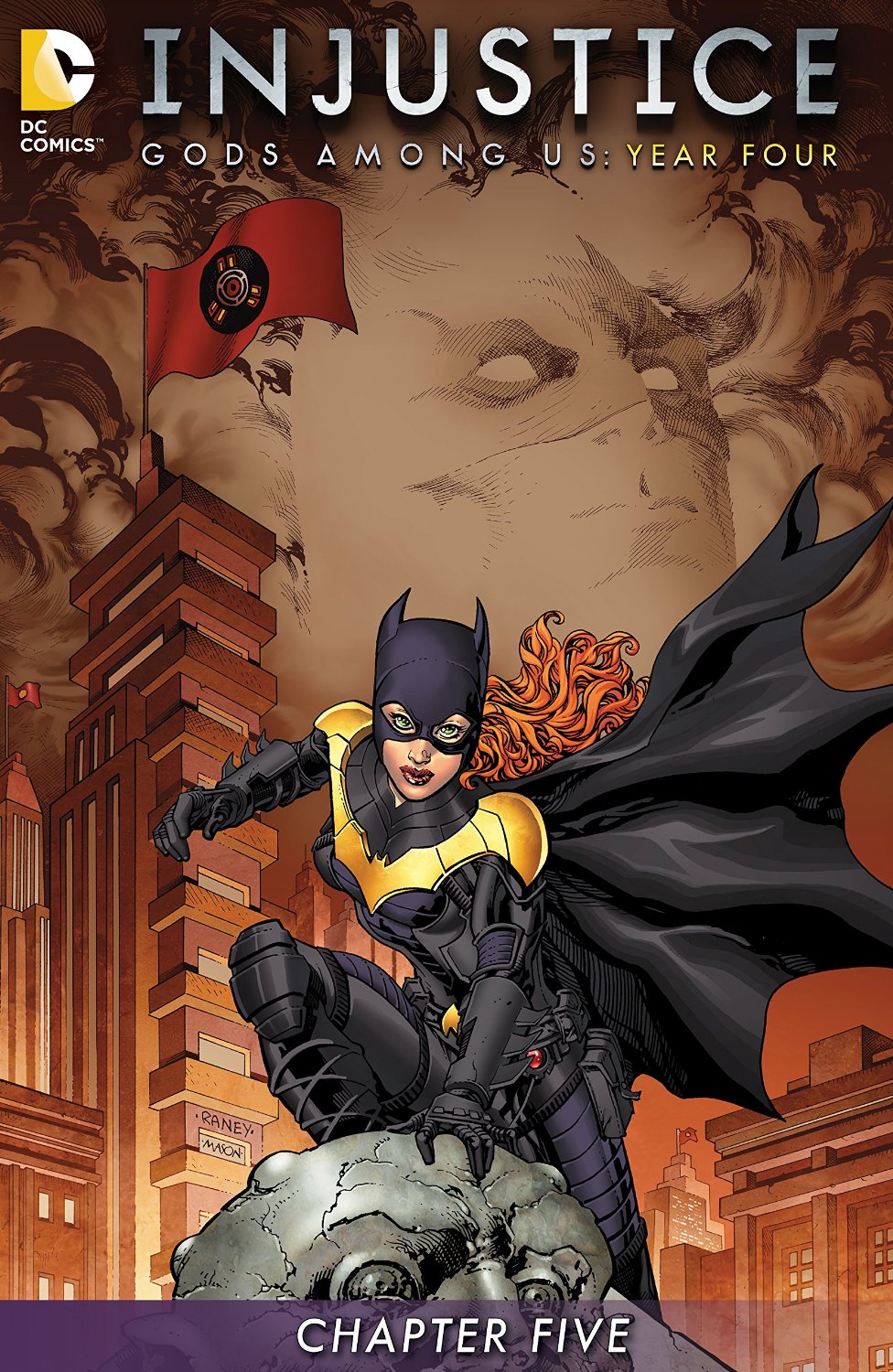 Click to enlarge
Batwoman looks over the graves of the Insurgency who have fallen, swearing to avenge their deaths. The Batman looks to gain allies, but finds reluctance on the part of Aquaman. The dwindling numbers inspire Oracle to undergo a risky procedure involving the technology of the super-pill, which is administered by Lex Luthor. The result allows Oracle to become Batgirl once more, and add herself to the ranks of the Insurgency as a fighter. Harley Quinn has abducted Billy Batson, and keeps him sequestered within Green Arrow's former base of operations, now dubbed, The Quiver. The Justice League receives a visit from the Amazons, as they stand amassed into an army, with Hera and Hermes at the head. They order Regime Superman to leave the Earth, or suffer their fury.

Story - 2: Five issues in and Injustice still hasn't found any basis for this year. The Insurgency is drastically reduced in power, so much so that they seemingly pose no significant threat, and as Regime has allowed the Batman to walk away unmolested or checked, there is little reason to believe otherwise. The arrival of the Amazons is curious, as it's uncertain why they would follow Hera into battle, as she isn't their patron goddess, or why Hera feels the need to involve them at all. Hera is queen of the gods, and that distinction isn't merely a cosmetic one. She's the most powerful of the goddesses, and only four gods could surpass her in power. The use of an army, of course, will allow for more BAM BIFF BOOM!, but on first blush, it doesn't seem necessary. The arrival of the Amazons also gives the indication that this will be a conventional confrontation, even though the gods are involved. Gamers, D&D gamers, will know that gods, even lower level ones, are immensely powerful. If used well, the conflict between the League and the Greek pantheon might be very entertaining. That would mean, though, that the gods will not be gods merely in name. The super-pill, again, comes through to save the day, and Oracle becomes Batgirl, which is very questionable at this point, particularly with what occurred to Renee Montoya. While the pills provide great strength and durability to the nebulous degree of the writer's needs, they also exacerbate the physical system of the body to some degree, speeding up Jim Gordon's cancer, and killing Montoya when she consumed too many. Batgirl's return is due to the super-pill, but it remains to be seen how healthy a decision this is, or if it will matter at all, as she's not one of the characters designated for death. The change from Oracle to Batgirl, a regressive one at that, is another reminder that skills and worth that Oracle has, are less than the ability to ambulate and kick bottom. That is very disappointing.

Is there an orange alert for Billy Batson? The young boy who was taken out of school by a woman claiming to be his mother, spirited off, and not seen again for the rest of the day? The frivolous treatment of his kidnapping by Harley Quinn is compounded by the fact that she is on the side of the Insurgency, and that the Batman has reduced himself in character, low enough, to need to lean on such a depraved woman, because he has no solution to the problem of Regime Superman, that doesn't involve fighting and battling. The World's Greatest Detective, a master strategist, the man with a plan for anything, yet his approach to defeating Regime is the same rote exercise that has failed him for three years straight. What's more, the reaction of the world to Regime and the League being in charge seems to be positive. There are no protests, no demonstrations, absolutely no attention paid to how the people of the world feel about having a despot to lord it over them. The Insurgency seems to be fighting for a world that doesn't care very much at all about who's running the show, and why should they? Regime Superman is depicted as a benevolent tyrant and the Batman has made himself into a joke. Between Black Canary trying to kill Regime, and Renee Montoya's ill-advised attack, the public must logically look on the Insurgency as a fringe group of fanatics, who have no clear direction other than to do the League, primarily Regime Superman, great harm unjustly. That is a large part of the Injustice story that has been neglected and ignored for too long a span, as if what the Insurgency is doing, is ultimately for the people, the people need to be given some voice that explains their position and feelings about what is occurring in their world.