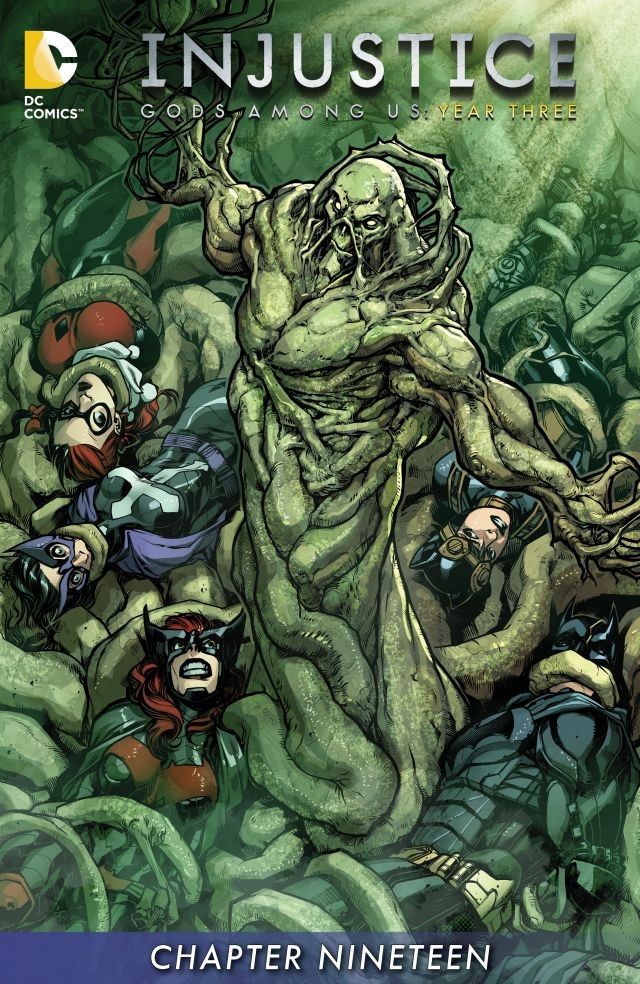 Click to enlarge
The Insurgency has a convocation on what to do, now that it's been revealed who has been possessing the Spectre. Mr Mxyzptlk's entry into the fray causes concern amongst the group, but Constantine seems to be the only one to take it all in stride. Trigon and Mxyzptlk continue their battle. It's revealed that Mxyzptlk has taken up Regime Superman's cause because he refuses to lose his favorite playmate, and went so far as to possess the Spectre in order to aid Regime. The fight with Trigon continues, but as the magical elements begin to harm Regime, Mxyzptlk transports the League to the Insurgency's retreat within the House of Mystery. Once more the Insurgency battles the League, and defeats them soundly. However, the roots of the Earth rise up and wrap around the Insurgency, heralding Swamp Thing's entry into the battle and making it far from over.

Story - 2: Swamp Thing's re-entry to the story will hopefully breathe some much needed life, in addition to sense as well. The premise for this year's folly just doesn't add up over the course of a linear, logical examination, and it stems from the change in writer's, but also a lack of knowledge in writing magical characters. For instance, Mxyzptlk isn't a magical creature. It's been said more than once, that the science and technology of Mxy's dimension resembles magic, because it is so advanced. However, either way, Mxy is portrayed as a being of limitless power: So why does he need to possess the Spectre? Does he require more limitless power? The Spectre isn't a magical, so much as a mystical being, but that he's possessed by Mxy makes one question just what it means to be God's Wrath these days. A being imbued by God, you would think, should be unable to be possessed, unless willing to go along with Mxy's plans. The idea that magic is a weakness for Regime Superman, has been discussed in a previous review, but here it seems that ambient magical energy works like Kryptonite against Regime. Magic has rules, applications, and most of all, limitations for all but the highest mages and wizards. Even then, it doesn't work like Kryptonite and has to be used to effect him specifically, unless otherwise stated. Excalibur could cut Superman, but that would be about it unless the wielder has the needed strength to impose more than just a cut. Superman could still break, melt, freeze, etc. in regards to Excalibur's overall strength. It's a sword of sharpness, not an indestructible blade. When magic is used well, the story can be very entertaining, but this just feels and reads rushed and ignorant.

Mxyzptlk's portrayal here is Joker-lite, and that compounds the laziness that preceded this issue. "My Superman!" sounds painfully familiar, as it's been said of another antagonist about another hero. Mxy is powerful enough that he should be able to clear the deck on his own, which makes the use of the Spectre redundant, especially since there hasn't been an established reason as to why the Spectre would be needed. The match between the Insurgency and the League was a joke, as if one could really believe that the drug-enhanced Insurgency could contend with the League on any level. The problem stems from the super-pills being equivocal in terms of their overall effect and application. Still, what pill could give any mortal the power to contend with Captain Marvel or Wonder Woman? It doesn't stand to reason, and since it hasn't been detailed (which would defeat the purpose of a Deus ex Machina device) the pills will do whatever, whenever, and be the perfect crutch for the story that continues to limp, limp along.

Art - 3: Blame the script, but the art comes across as indolent when having to serve such a pace-less story.