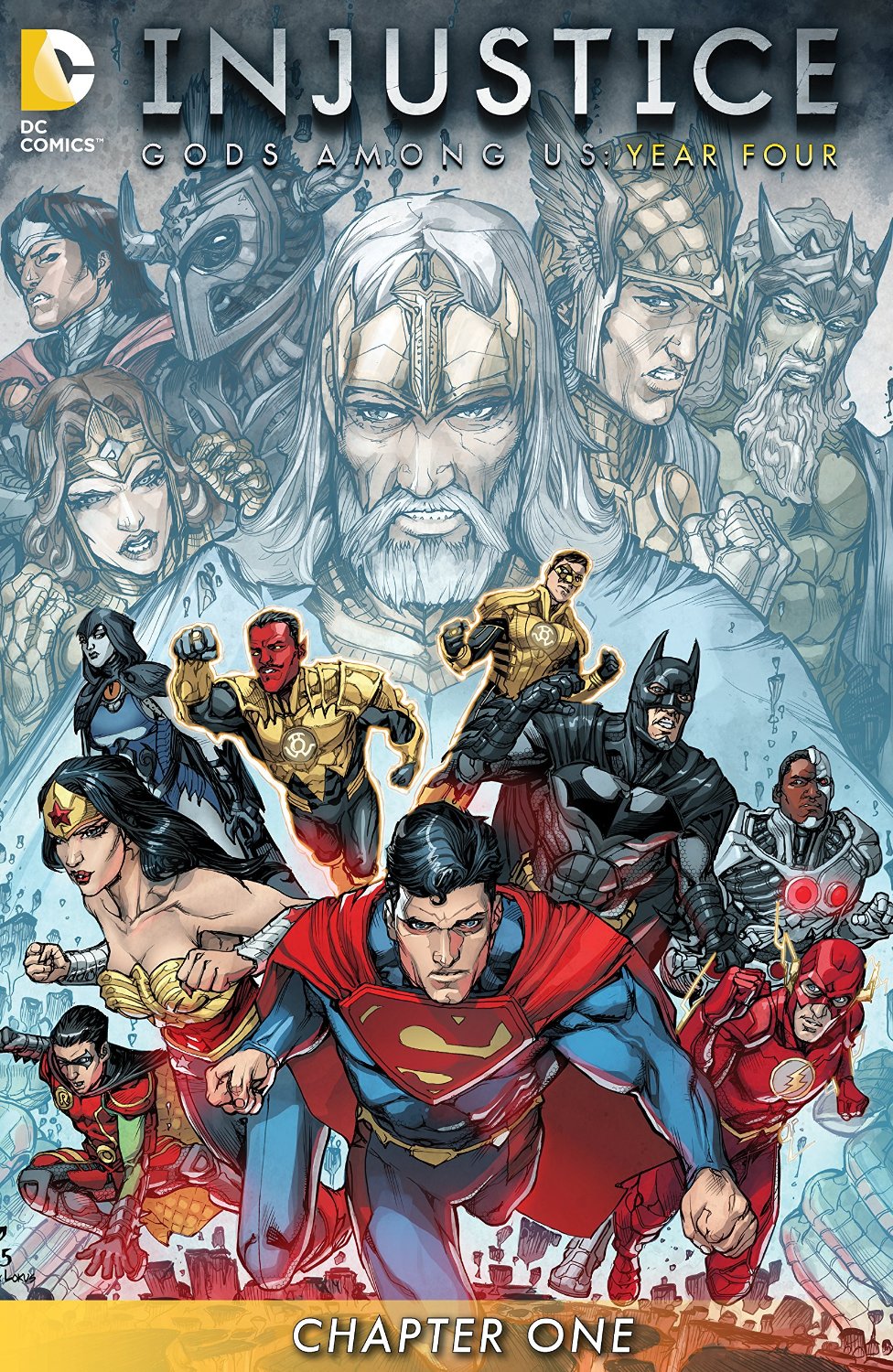 Click to enlarge
Ares is goading Hercules, while they share a path on Olympus, home of the Greek Gods. After being threatened with a throttling, Ares suggests to Hercules that mankind, which now worships itself, needs to be reminded of their place. Elsewhere we're shown a brooding Regime Superman, who is still looking for the Batman, without success. He gets into a disagreement with Yellow Lantern (Hal Jordan), over his words and tone, but Wonder Woman arrives before the dispute can escalate further. Wonder Woman reminds Regime that while Regime is the best of their lot, he is not above those he seeks to protect. Deep beneath the pacific lead mines, the Batman broods on his situation, while Alfred pushes comestibles on him. He reminds Batman that none of the unfortunate events are his fault or his cross to bear alone. The effect of Alfred's words are unknown, but later Batman meets Ares atop a mountain to tell him that, whatever the plan may be, he's in.

Story - 3: An uneven start from out of the gate. Not that it matters, as Injustice is a top seller and is guaranteed a fifth year, the same way Gotham is promised a second series/season. The contrivances that will be necessary for this year, after the lackluster performance of Year Three, will be mentally insulting, but accepted so long as the story is entertaining and "unpredictable" in he faux manner that it offers. The idea that these characters were once the Justice League of America is risible, and not because of the events that have brought them here, but seeing as how the major incident involved Regime Superman solely, it's comical that they became the League at all. It feels that they were brought together not to protect the people and the planet, but only to tell this dysfunctional tale. Otherwise, it becomes not only unbelievable, but implausible that these characters could have worked together for as long as they imaginably did until this happened. There's great irony in Wonder Woman's advice to Regime Superman, but it's not clear if Buccellato does this with intention, or it just sounds nice to the ear. That Regime is "First among equals" reveals her mind-state better than any action that she's undertaken up to this point, but how long as she felt this way, and is it understood that her contradictory statement reveals why she's not a heartbeat away, but is full tyrant mode herself? The death of Huntress at Wonder Woman's hands should be an act for great reflection. Instead, we're given "things happen" and "moving right along". There is no descent for this lot, for it appears they were already there.

The most niggling and annoying parts of Injustice, are the ill-thought set-ups to foster the length of the story. Regime Superman desperately wants to find Batman, because Batman could bring an end his plans? How in the world could Batman accomplish that at this point? Nothing short of a magic wish would be effective, and we we're given a year of magic to see how futile that approach was. Batman, quite honestly, isn't a threat. However, he will be aggrandized to that level illegitimately to continue this taffy pull. Regime has his abilities, Captain Marvel, and Yellow Lantern. Raven is back in the fold, along with Flash and Cyborg. Are readers seriously supposed to believe that Batman cannot be found simply because he's underground in a lead mine? Captain Marvel possesses the power of Zeus, that alone would allow him to find Batman. Yellow Lantern's constructs would be just as effective. Even Regime, vision blocked by lead, would still be able to trace radio waves to Batman, as he is using computers and such. It's a lack of creativity and a punishing one. We could see Batman on the run, always having to change locales, running low on resources, and really taking a beating to stay just a breath ahead. No, we have Alfred serving him Kraft Macaroni and Cheese instead. Batman making a deal with Ares, for me, is another reminder how little difference there is between him and Regime. They are both willing to make any alliance and do whatever is necessary to meet the goal they respectively have.

Art - 4: It's queer to like and revile something simultaneously, but Redondo channels Christopher Reeve for a few shots of Regime, which does a good job of making him look even more despicable. I preferred Derenick's hair slicked back rendering, but this works, for now, as a reminder of what Superman should look, and why the look isn't enough.

Cover Art - 4: If you'd never read Injustice, and saw this cover, what would you think? Yeah, that's what I thought.