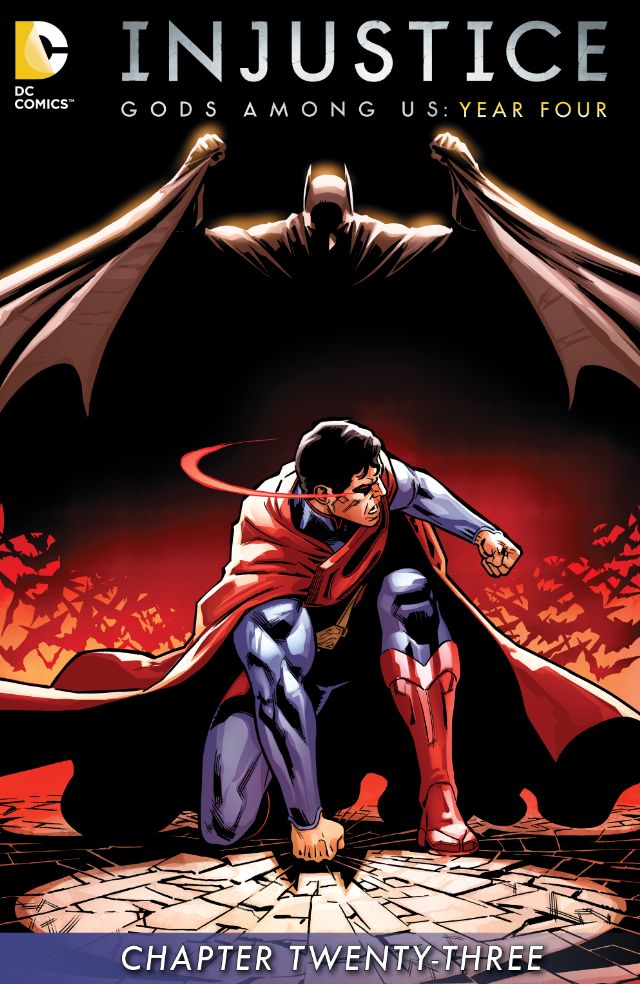 Click to enlarge
The Justice League engage the Olympians, in what they believe will be their final conflict. The Insurgency arrives to support their efforts, but the battle comes to a halt when Cyborg detects a nuclear launch. Yellow Lantern goes to engage the missiles, but is stopped by a shaft from Eros. Wonder Woman steps in, handles the weapons, knowing that death is certain, but Regime Superman arrives at the last moment and takes the missiles off her hands, disposing of the weapons and catching Diana before she falls to the Earth. Regime demands that Zeus revoke his claim on the Earth, prompting Zeus to appear. Zeus has had enough of Regime, and states that he'll destroy him, but Highfather arrives and puts Zeus' plans on hold.

Story - 1: Steven Spielberg was quoted as saying that Superhero films will go the way of the Western. Recall those words as the Justice League walks to the Olympians, only to stare them down before engaging in final battle. It's a laugher of a scene, as it's supposed to be dramatic in its slow build up to the fight, but a discerning reader asks the immediate question: "Why are they walking?" It's a fifteen minute saunter to Hera and her compatriots. Fifteen minutes. The world is being rocked, but the League has fifteen minutes to spare for dramatic license, especially since the Olympians rocked their bottoms the last time they fought. No need for strategy or even a sneak attack, no sir, just walk right in. The idiocy is only matched by the Olympians letting them do it. The gods have to know that they're coming. Gods can see whatever they want, and the fact that they allow the League to walk in, rather than blow them to Hades from a distance must have Odysseus rolling in his mythical grave. When Hera finally displays an inkling of how powerful she is, the wonderment at the act is confounding. Why not do this earlier? Why are you dallying with beings you can so easily be rid of? The final word on that is Buccellato's craftsmanship, or lack thereof. His tenure on Injustice has been to mine everything that Tom Taylor produced, knowing that's all he needs to do.

Regime Superman saving Wonder Woman is the sole reason this issue received a point at all. Injustice has the dubious honor of being one of the few places any semblance of Superman can be found. He's a clone in Superman, a poseur in Action Comics, and undefinable in JLA, Justice League of America, and Superman/Wonder Woman. None of the aforesaid display a character who is recognizable as Superman, or display Superman at all in my opinion. However, this installment of Injustice gives readers (for one page, six all too short panels) what Superman is supposed to represent, the hero you can count on when all else fails. He cures the problem, and not only that, he saves the people, who just happens to be Wonder Woman in this instance. The moment is very reminiscent of Regime Superman repelling the Paradaemon invasion on his own. There's an excellent panel where his face contains such emotion for what he's about to do. It's totally wrong, but Regime, now plagued with he demons that seem to be so fashionable for characters these days, cannot see another way. Perhaps Regime Superman is the Superman that we both need and deserve these days, as so many have given into the laziness of creators and their ability to beguile so many that there is only one type of character, as many also think there is only one type of person. The one who screws up, then magically learns to do the right thing. There are no people of excellence; no women of introspection, no men of empathy, merely masses plagued by trauma of the past. It was nice to see, if only for a moment, to see Regime in a moment that ironically recalls his trauma-free past.

Art - 3: There's little dramatic build-up from the walk to battling the Olympians, and the best shot of the melee was when it was over. Injustice is a fight book, but even that has become vapor.

Cover Art - 4: It would be a 5 if he actually turned around and killed him finally.