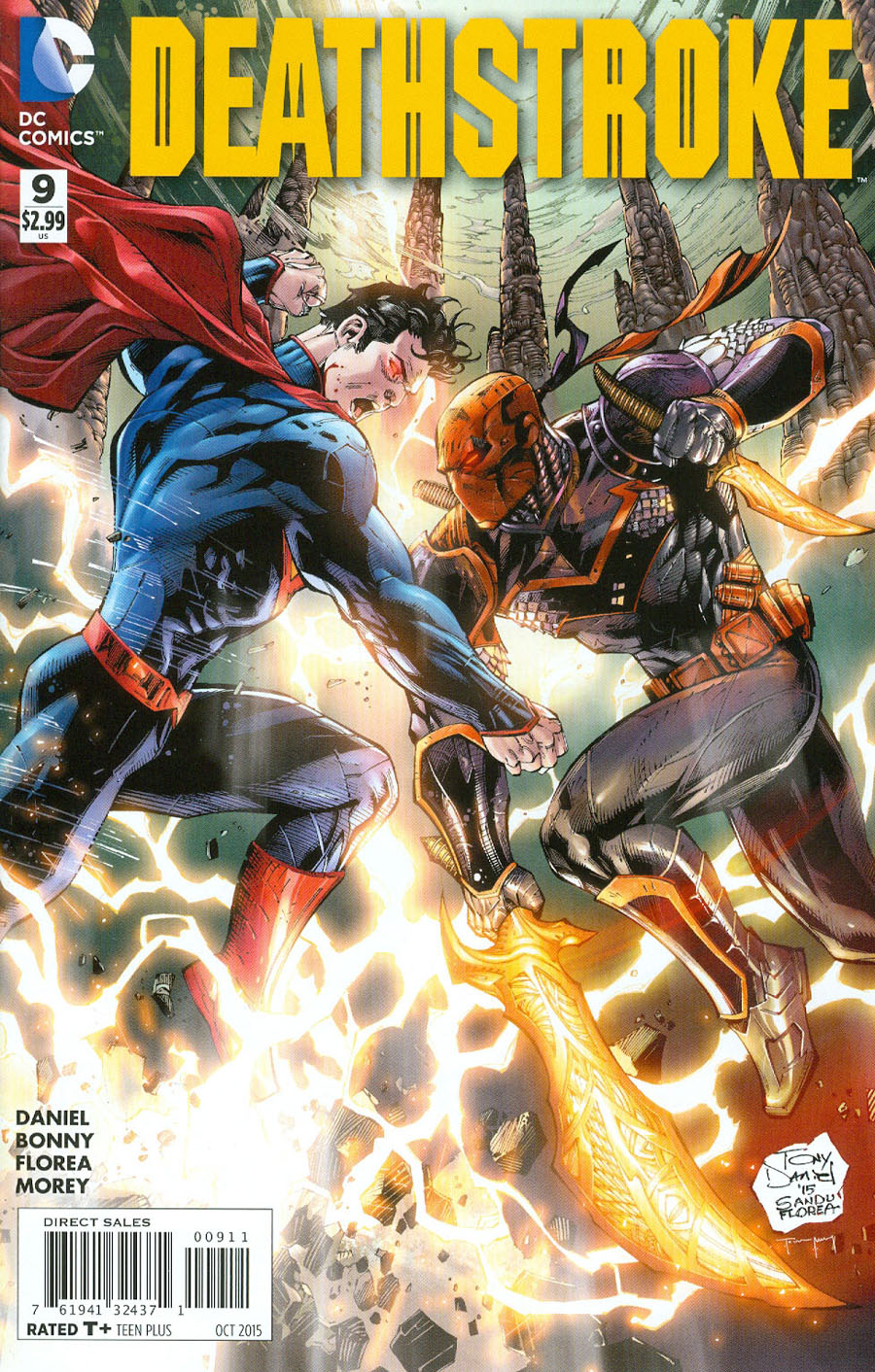 Click to enlarge
Wonder Woman and Deathstroke return to Paradise Island, after being consigned to an abyss, to find it overrun by Lapetus and a mass of aggressive fodder form Tartarus. Deathstroke, armed with a god-killer sword created by Hephaestus, seeks to stop the melee and save the world. Wonder Woman engages Lapetus, but is rocked for her efforts. Deathstroke goes to aid her, but Superman arrives takes Deathstroke for an enemy. The two battle until Wonder Woman revives and stops the battle. Lapetus returns with a weapon of import, ready to do battle.

Story - 4: If you're like myself and enjoy comic battles, this was one for you. It was also rewarding in it addressed a larger question and misconception of Superman and magic. Superman has one weakness, and that's Kryptonite in its myriad forms. However, red solar radiation and magic are lumped into the mix, mostly out of misconception and DILLIGAF writing. Red solar radiation is a topic of another time (looking at you GJ!), but this issue of Deathstroke is perfect to set the record straight. Magic has been said to be Superman's weakness to the point some believe that you could beat him silly with a glass slipper. Magic involves a considerable amount of nuance and thought, as it's spell casting, and not painting with a roller. Spells are designed for specific effect, and are almost all ways patterned for human beings. Magic lightening would kill a human being, while stagger, buffet, and knock Superman around, but not cause death. While Superman isn't immune to spells the way he is to bullets, he is highly resistant for a large body of magic that would decimate another being.

Deathstroke's sword, a god-killer, is a perfect example. The sword allows Deathstroke to contend with Superman for a time, and as "the Terminator" states, it responds doubly to whatever is thrown at it. However, it isn't enough to stop Superman. Why? Superman's power-set doesn't allow for a meta-human like Deathstroke to contest with Superman for long, and while the sword is powerful, Superman doesn't have to sit still and just take it. We're shown scenes of Deathstroke ensnaring Superman in a force that should be double his strength, and Superman breaks free. Once the Man of Tomorrow turns on the speed, the fight is over, magic or not. Superman doesn't look particularly weak at any time during the fight, and in fact, seems to be holding back. So the next time some lad is on about magic, please refer them to this issue, upload your scans, and there's no need to thank anyone... but you're still most, very welcome, indeed.

Art - 3: Not the best, but it's all about those five page with Deathstroke and Superman at it.