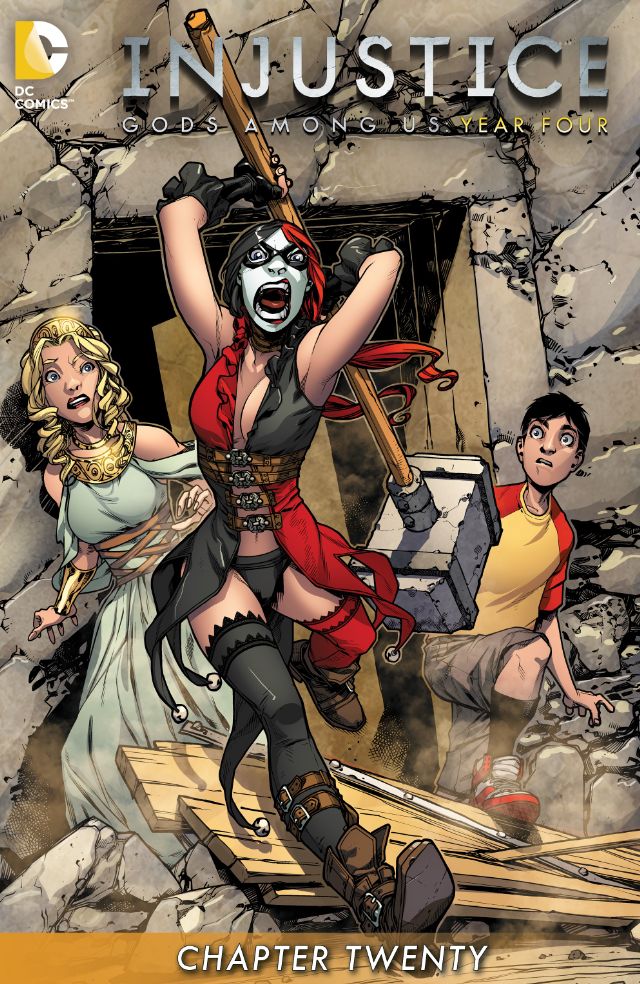 Click to enlarge
Themyscira is about to be overrun by a giant tidal wave, but thanks to the combined efforts of the Justice League and the Insurgency, the wave hits without any casualties. Zeus steps into the fray, and orders Regime Superman to leave Earth. Superman tries to contend with Zeus, but to no avail. The Batman arrives and alerts all present that Ares has been pulling their strings. He tells Regime Superman that Harley Quinn has a Mother Box, and with that knowledge, Superman leaves the Earth, which Zeus considers Regime having acquiesced to his demands.

Story - 1: The majority of this story is about a tidal wave that is about to crash into and kill the nameless Amazons of Themyscira. There has been no development of the Amazons, save the ones that we know. Artemis's incredibly ridiculous attempt at... actually, what in the world she thought to accomplish is something that can only make sense to Buccellato. There's no way the Amazons could have more than die against the force of the wave, so their supposedly noble stance comes across as insane. That being said, because there was no development, why should readers whether they survive or meet their fate? That this lot is saved where so many others have died is laughable. Zeus laying the smack on Regime is apropos, as he is a very powerful character and should be dealt as such, this just hasn't been Regime's Year, pun intended. He gets trounced by Wonder Woman, diseased by Apollo (which was never resolved), and slapped around by Zeus. It's becoming hard to remember what was so enticing about him in the first place. Pretty soon Harley Quinn will be strapping him down like she did Lobo.

Horrible and senseless as Injustice may be, if it had a saving factor, aside of its ability to tell a serial well enough to keep us coming back, it was that it gave readers a look at a competent, unapologetic, decisive Superman, even if he was evil. The high point of that was the end of Year Two and it's been downhill ever since. Year Three had him in pointless battle with Batman, and not kill him, in addition to being the butt-monkey for anything magical. Year Four? He's pathetic. Regime losing to Wonder Woman would have made for a great battle if done well, but it wasn't, and if you've read the definitive battle of Superman against Wonder Woman in Sacrifice, the Injustice fight is so much birdcage liner. Couple that with Regime killing Hercules with a strike from orbit, you have to wonder why he didn't take Diana out that way. He's become the equivalent of Superman from Superman: The Animated Series. That was the show that drilled into the minds of those who loved it, that Superman must first take a beating, and then he'll pull out a less than spectacular win... against teenagers with no experience. The killer was the last episode where Superman states he lives in a world of "cardboard" and then cuts loose against Darkseid. So many who watch that are so caught up with the display of power and speed, that they don't ask: "Hey! Why didn't you that before?!" Metallo, Kalibak, surely they were tough enough for him to cut loose against? If not them, then surely the Prometheon? It doesn't track, and neither does Regime Superman's decline to two-bit supervillain that the real Superman would make short work off... and does.

Art - 3: It's just boring. I can't fault Redondo as there's little to expound on, but it's just unentertaining.