The first General Zod was one of the kryptonian villains from a "pocket universe", executed by Superman.

The Time Trapper learning that the Legion of Superheroes was created by being inspired by a supposed Superboy in the past, took a moment in time of the universe and pruned the "pocket universe" so that only Krypton and Earth existed and shaped the timeline so that Krypton produced Superboy on the Earth, but no other superheroes; after Superboy disappeared into the 30th century, the Kents died, and Lana and Pete met Luthor. Luthor found a time viewer in Superboy's hidden lab and was tricked by the Phantom Zone criminals (General Zod, Quex-ul, Zaora) into freeing them. Luthor organized a resistance with Bruce Wayne, Hal Jordan, Oliver Queen. The Phantom Zoners destroyed the Pocket Universe Earth's atmosphere killing almost everyone, so Luthor created and sent out Supergirl to Superman's universe where she succeeds in getting him to come back with her. Luthor has Superman use gold kryptonite on the Phantom Zoners to remove their powers and be captured. Superman uses green kryptonite to execute the Phantom Zoners when they threaten to escape and destroy his Earth (SUP #222). Superman takes Supergirl to be cared for by the Kents and Lana.

When Superman and Lois travelled to Krypron through the Phantom Zone, not only did they meet both Jor-El and Lara in a Krypton that seemed far different to that which Superman originally believed to have been his home planet, but they also encountered a power-hungry Kryptonian general known as General Zod. Zod objected to Jor-El's reports about the approaching doom of their planet, and eventually gets approval from the Ruling Council to bring Jor-El in, however Zod goes overboard and uses excessive force which ends in a major battle with Jor-El and Superman in which Zod overloads and vaporizes, promising to return (ACT #776).

Soon after returning from their trip to the strange new Krypton, Superman is confronted by a "General" from Pokolistan who is garbed in a red uniform from head to toe. He pummels Superman, breaking his jaw (ACT #779) Superman later returns to confront the General who reveals himself to be General Zod, accompanied by a team consisting of Faora, Ignition and Kancer. Their confrontation is cut short by the appearance of Imperiex.

General Zod dealt with Luthor in "Our Worlds At War", and continued to harass Superman before ultimately making his move.

In battle with Zod, Superman accidentally killed him (Zod forced him to), but not before learning that the spirit of the original pocket universe Zod had somehow attached itself to a Russian human host in space and granted him Kryptonian powers.

A new Zod emerged, the Kryptonian Zod who was an adversary to Jor-El, trapped in the Phantom Zone. He came across "Metropia", Superman's Phantom Zone shelter for Earth in the event that it suffer's Krypton's fate, and corrupts it in his own image before Superman stops him. When Metropia collapsed in upon itself, Zod refused Superman's help, chosing to vanish back in to the Phantom Zone. 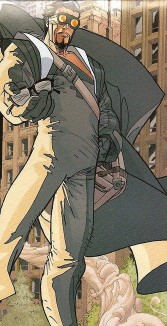 Within current continuity, a new General Zod has once again come to the forefront. This Zod is much more like the Zod of old, imprisoned in the Phantom Zone by Jor-El before Krypton was destroyed and teamed with Ursa and Non, his cohorts in crime. According to a memory crystal within the Fortress of Solitude, General Zod was once the head of the military Defense of Krypton but ultimately was behind an attack on the council that left several dead. For Zod planned to take over rule because he felt the non-acting council were responsible for Krypton's coming doom but the council found Zod, Ursa and Non guilty of murder and treason and planned to execute them. When Jor-El, who believed every life precious, asked if there were anyway to spare their lives, the council told him that if he would jail them in the Phantom Zone and remain silent about the impending destruction of the planet, the criminals could live within the prison. In that resolution however, there laid a paradox, for if Jor-El were to remain silent, he'd be exchanging millions of Kryptonian lives for these three.

Within the Phantom Zone, Zod and Ursa conceived a child, whom they routinely abuse, attempting to fill his head with harsh military disciplines toward loyalty and subjugation. Since the child was born in the Zone though, he is able to transcend the prison and escape to Earth where he meets Superman. Lois and Clark adopt the child, but when Zod follows his son's trail and is somehow able to use the same method to follow, all hell breaks loose in Metropolis. For Zod brought with him an army of other Kryptonian prisoners and has decided to enslave the human race, transform the Earth into a new Krypton and rid himself of the son of Jor-El. Furious that his son has turned against him and taken the human name Christopher, Zod ensnares Superman with a Phantom Zone projector, trapping Kal-El in the very prison he and his army escaped from.

With the help of Mon-El, whom Superman placed in the Phantom Zone so his deadly disease wouldn't progress any further until Superman could find a cure, Superman managed to escape the Zone using the same method as Zod. Once back on Earth, Kal-El enlisted the help of Luthor, Metallo and the Parasite and defeated the Kryptonian criminal army sending Zod back to the Zone. Unfortunately, Christopher sacrificed his own freedom to save his adopted father and so, the child too is pulled back into the Prison. For now, it seems Zod and his partners are once again forever exiled to the Phantom Zone and that the world is safe from their tyranny.

Somehow, when this new Zod appeared, and perhaps in conjunction with the 52 new versions of Earth, all previous incarnations of Zod seemed to have vanished with no explanation and leaving no memory of their ever having been so now only the one true Zod remains, and his vow of vengeance on the son of he who had the General jailed is fully intact.