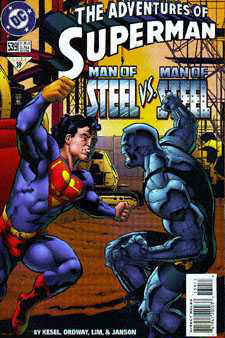 Floyd Barstow is a clone created in Cadmus, his "clone-source" was a convicted murderer called "Bullets" Barstow (AOS #539). After a scuffle with Misa, Floyd noticed a few scratches on his right hand. These scratches appear to inflame and cause Floyd to become Anomaly, a being who is able to re-make his body out of any substance he touches. It appears Floyd has inherited the evil from his genetic source. He joined the Superman Revenge Squad, where he was easily defeated by Superman. Intergang got him out of prison, and he began working with them. However, he found himself unable to assist Intergang murder Guardian, and helped rescue him. (AOS #550). Guardian took him back to Cadmus to see if he could be helped.