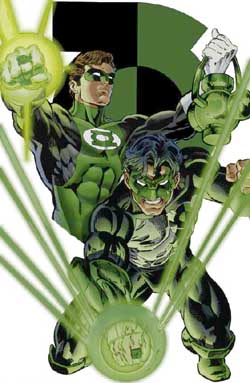 The name is legend, but many have been known under the heroic alias of Green Lantern!! Historically, Green Lantern is one of America's premier champions, utilizing a power ring of cosmic origins, which allows its wearer to fly, and do nearly anything he/she can think of.

The original Green Lantern of Earth was Alan Scott, who was first a civil engineer, and later a radio broadcast executive. Mr. Scott, as the original Green Lantern, was also a founding member of The Justice Society of America. Very early in his career, he was based in Metropolis (Secret Origins #18), but for the most part, he has been active in Gotham City and New York City. One of society's oldest superheroes, he now fights crime under the name Sentinel.

Modern America is more familiar with Hal Jordan, who was Green Lantern for several years. This is the Green Lantern who appeared shortly after Superman introduced himself, and the two heroes were among many who ushered in a new Heroic Age in the late 20th Century.

A test pilot along the West Coast, Hal Jordan assumed the mantle of Green Lantern when Abin Sur, the Green Lantern of our galaxy, was dying in the Southwestern region of The United States. He sent a mental relay to find someone on Earth who was worthy of the duties of a Green Lantern, and Jordan was the chosen one. As a member of the intergalactic Green Lantern Corps, Hal Jordan fought crime on Earth and in space. He was a founding member of The Justice League of America, and defended Earth against numerous supervillains and world conquerors.

While the reigning Green Lantern of Earth, two others were made deputy Green Lanterns: John Stewart and Guy Gardner. Both men were admirable heroes, and even served with Superman in the JLA.

However, tragedy befell Hal Jordan when Mongul and The Cyborg, two of Superman's worst foes, destroyed Coast City (Hal Jordan's hometown) killing millions of citizens in a horrific explosion. The slaughter and complete decimation of Coast City left Green Lantern emotionally distraught. When he tried to recreate the city utilizing his power ring, the Guardians of the Universe, the commanding council of the Green Lantern Corps, demanded that Jordan surrender his ring immediately, or face expulsion from the Corps. Defiant and slightly derranged, Green Lantern slew several of his fellow Corps members and then killed all but one of the Guardians. He then immersed himself in the giant power battery which supplied the Green Lanterns, itself a gigantic green lantern in appearance. Now internalizing untold cosmic energies, the former Green Lantern named himself Parallax, and initiated a major dimension-altering effort, battling several superheroes, including Superman. This conflict known as The Zero Hour, left left several members of the Justice Society of America dead, and altered the origins of many superheroes.

At the end of Zero Hour, the Earth was saved, but Coast City was still leveled. Parallax was left disgraced, and a new Green Lantern was chosen to protect the planet. Kyle Rayner, a struggling artist from Los Angeles, was selected by the last Guardian of the Universe to be the new Green Lantern. As of this writing, Rayner has proven himself capable of being Green Lantern, and has even joined The Justice League of America, fighting side-by-side with The Man of Steel.

To the world-at-large, the name of Green Lantern has stood for righting wrongs and maintaining order in America. The many who have worn the colors of Green Lantern have proven themselves heroic many times over. Even Hal Jordan, the onetime Green Lantern, sacrificed himself to save Earth; and now, his soul has merged with the Astral Avenger, and he is the latest man to become The Spectre. When it comes to naming the world's greatest superheroes, Green Lantern is definitely among the top of the list!

Recently, there has been a shift in the Green Lantern status quo. Through the events of Green Lantern: Rebirth, Hal Jordan has returned to the DC Universe. He establishes a new Green Lantern Corp, sure to work side by side with Superman in the future...