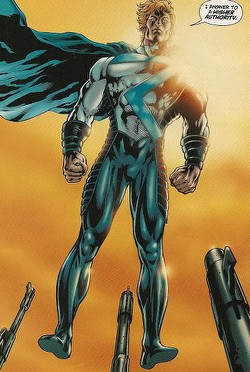 In approximately April of 2007, though the cover date on Action Comics #848 reads May, Superman met and had a "small disagreement" with Redemption. Redemption, real name: Jarod Dale, using powers gained from a corrupt pastor running the First Church of Redemption in Valley Falls, Colorado, killed fourteen Nyasirian soldiers and decimated 22 acres in one blast after being provoked by them while protecting missionaries from the Sakira Tribe who were followers of the Church's teachings.

This altercation occurred only a few months after Clark got his powers back, having lost them during the Infinite Crisis, but he had known about the mysterious Redemption vaguely for as much as a year earlier. Though Redemption was simply a nameless, mysterious metahuman with "no story" behind him according to Perry, Clark requested he be allowed to fly Nyasir, Africa anyway in order to investigate. Perry called it a fishing trip because not enough info was known and wouldn't let Clark go. When the attack occurred and the soldiers were killed, Clark felt partially responsible, having not "done more," even before his powers returned.

Through investigation Clark felt came too late, he discovered that pastor, a Reverend Matthew Hightower, was an infantry chaplain during World War II and a powerful metahuman, lost control of his powers on the German front and killed over 2300 men. After realizing he was much too powerful, Hightower decided to subdue his powers deep inside of himself so not to "lose control" again. Then he found Jarod. Once he realized he could syphon some of his great power off to Jarod, he felt he could use the young man to supply much needed justice to the corrupt government in Africa mainly in order to massage his own guilty conscience.

After being alerted to this manipulation, Jarod/Redemption, who had been under the impression that it was the people of the church's faith that were supplying him the power to protect them, Jarod felt betrayed and told Hightower that he would no longer do this work for him. Hightower grew angry and withdrew his power from Jarod but no one else was harmed. In the end, in front of Superman and Jarod, the entire congregation were told the story and walked out on their once trusted Reverend. Clark left the story unwritten and Jarod Dale/Redemption, bereft of the power once given him by Hightower, was left to live a normal life with his parents.