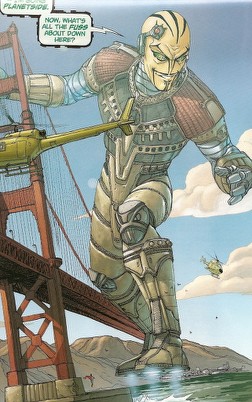 In September 2006, while the general public was still trying to decide what to make of Superman's return after his year-long absence, Superman himself was captured by a being known as the Auctioneer. The Auctioneer: a being with immense technological power, the ability to collect various objects and/or beings from his intended target planets with seemingly no difficulty and is capable of rendering super-powered beings powerless, at least for a limited period of time.

The Auctioneer began on Earth by sending various "collectors," a series of robots and mechanical devices, to scoop up famous, beautiful and important landmarks throughout the planet. Safely hidden away on his ship in deep space, the Auctioneer was accepting bids and offers on these items as he gathered them, apparently his normal MO. Soon enough though, once Superman intervened to stop him, the Auctioneer realized that his operations were being threatened by a sale item that could fetch him more than all of his other collected items combined: Superman himself!

Scanning the planet for other metas, the Auctioneer found two other Kryptonians and of course, several hundred other super-powered beings and he began collecting them with ease.

Soon, the metas started escaping but the Auctioneer, ever calm, believed them to be no threat, for he had somehow limited their access to their special abilities. As usual though, another adversary had underestimated the "humanoids," and the captured heroes and villains alike, spurred by inspiration from Superman, manage to successfully break the Auctioneer's hold and wreak havoc on his ship's facilities. Working together, the metas were able to recover their abilities and due to their damaging attacks on the Auctioneer's ship, bidders started dropping off and delivery of funds got cancelled. The Auctioneer, though he was certain the metas would cause no trouble for him, decided he must intercede and when he did, Superman threatened to have Livewire disperse the Auctioneer's entire data network galaxy-wide unless the Auctioneer agreed to release everyone and leave the Earth. The Auctioneer agreed, saying: "I will leave your planet unmolested for a time," but adds that he thinks they'll do business again in the future.

Of further importance is that, due to Superman's actions against the Auctioneer, the government and many of the people on Earth, other heroes included, began to accept that Superman had truly returned and that he was the real deal.