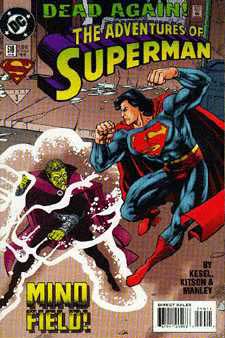 Brainiac (Vril Dox) was once a scientist on the planet Colu. Because of his genius, Dox was allowed to serve the planet's computerized tyrants. Attempting to overthrow the tyrants and rule Colu himself, Dox had invented a teleporter. Discovering his plan, the tyrants used the teleporter on Dox, apparently killing him. But Dox's mind survived and eventually came to Earth when it was found by the Amazing Brainiac (Milton Fine) a circus mentalist with latent mental powers. Dox fought to control Fine's body and while doing so found that combining his and Fine's mental powers allowed for amazing feats that caused several psychic battles with Superman. Fine's identity was almost destroyed by Dox who now completely controls the body and has great mental powers, partly due to an implant supplied by Lex Luthor. Brainiac's body and mental powers became even stronger after Luthor tried to control him in a psionics lab, where Brainiac instead managed to control Luthor and other LexCorp employees, and had his body modified. After fighting Superman, Brainiac flew into space, later returning to Earth with Warworld to battle Superman and a team of superheroes. Metron took away the defeated Brainiac. After Superman's return from near death, Brainiac escaped New Genesis and showed increased mental powers by making people think a body remained in Superman's tomb, in an effort to drive Superman insane. Afterwards, Brainiac was transferred to a psychiatric hospital in an attempt to save Fine's personality. When Brainiac found out a 15 year old patient (Chas Cassidy) believed he was Superman, Brainiac reasserted control of Fine's body and managed to transfer his and Cassidy's minds into Superman's body, and transfer Superman's mind into Cassidy's body. Brainiac managed to use a device to take over the minds of everyone in Metropolis, before Cassidy and Superman stopped him. 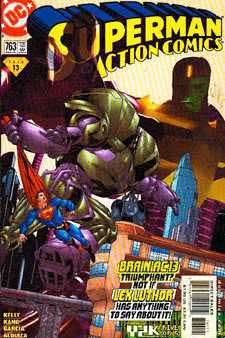 Brainiac appeared again to battle Superman briefly (Superman: The Doomsday Wars mini-series 1999), and it was believed that he was destroyed in the encounter. The remains of his body were retrieved by a Coluan scientist, Prin Vnok, who transferred Brainiac's consciousness into Doomsday's body, retrieved from the end of time. He defeated the Justice League and took Pete Ross and Lana Lang's newborn son to grow into a more controllable Doomsday body. During a battle with Superman, his mind was ejected from Doomsday, allowing the monster to go on a rampage before being imprisoned by Superman and the JLA. Brainiac transferred his mind into a permanent robotic body (known as Brainiac 2.5), and escaped to an unknown location. New Year's Eve 2000 saw the return of Brainiac 2.5 who, in an attempt to upgrade his new robotic body, found himself unable to control the download of a future version of himself known as Brainiac 13. Brainiac 2.5 transfered his conciousness into Lena Luthor while Brainiac 13 brought about the complete upgrade of Metropolis to a futuristic hi-tech city. Brainiac 13 was finally trapped by Superman's use of Kryptonian technology, but not before B13 convinced Lex Luthor to sacrifice his daughter as an avenue of escape in return for the "keys" to the new Metropolis (Superman Y2K [4 part storyline]).

Brainiac 13 returned as a surprise villain at the exact time of the defeat of Imperiex. In command of a new War World, Brainiac 13 planned to syphon the world-destroying power of Imperiex for himself (SUP #173). However he was thwarted when Superman, pulled together a plan with Steel, Luthor, Darkseid and others, to push Warworld, B13 and Imperiex through a boom-tube to the beginning of time (ACT #782).

Brainiac later returned to aid Lex Luthor and a brainwashed Superboy in their assault on the Teen Titans and Outsiders through his "granddaughter" Brainiac 8, the secretly reprogrammed Outsider Indigo. His plan, hatched in part to preserve his homeword of Colu from its supposed destruction in the future by Donna Troy, appears to have failed.