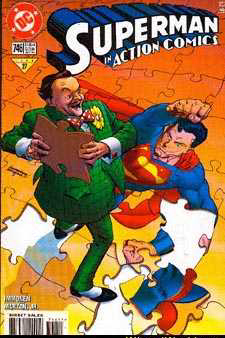 Once the popular host of the "Uncle Oswald Show," a WGBS-TV early morning children's program, Oswald Loomis unleashed a host of dangerous pranks upon Metropolis when ratings and cancellation cut short his comedic career. The Prankster, as Loomis dubbed himself, was easily thwarted by Superman time and again during his subsequent dangerous practical jokes targeted at Metropolis and its citizens.

Loomis' antics included kidnapping Lois Lane. His motive? So she could be the one to report his sad story hoping after he was arrested that the story would be so moving that he could retire a millionaire. Morgan Edge was also terrorized by Loomis. He initially tried to kill Edge with no success. After Edge was arrested for the attempted murder of reporters Clark Kent and Lois Lane by a robot assassin from Apokolips, he suffered a heart attack and was hospitalized. While there, Loomis tried once more to kill him and was again thwarted by Superman.

The Prankster has not surfaced until recently, this time equipped with a new body, the result of a devilish pact. (One has to wonder whether Neron was involved). On his return to Metropolis after the Brainiac 13 upgrade, he discovered that his old hideout had also been radically altered by B-13 and his gimmicks augmented. In his most recent move against Superman (AOS #579) he used one of his gimmicks, some sort of miniature ultrasonic device that causes a person to laugh uncontrollably as it directly stimulates the brain at a certain frequency. He was also involved with the mysterious plot to poison Superman by Kryptonite along with Encantadora. Whether or not the two knew they had the same assignment is unknown, but shortly after Encantadora had her breakdown of conscience, the Prankster was activated into his role in the deed.

Loomis terrorized a weakened Superman using his technological gadgets and even took out John Henry Irons using a suped up joy-buzzer. Taking control of Iron's "Steel" armor, he infiltrated Team Superman on their trip inside Superman's body to combat the Kryptonite poisoning (SUP #158). The Prankster played along at first, not wanting to give himself up but after he sabotaged the entry vehicle, he tried unsuccessfully to take out Superboy after he learnt of the youth's troubles with his powers. The real Steel deal showed up in a new deep sea armor he was developing and tried to apprehend the imposter only to be stopped by Supergirl who thought she was seeing her teammate being assaulted. Iron's was finally able to catch up with Loomis again, but, being one step ahead of the game, Loomis was able to teleport mysteriously away taking one of Iron's newly outfitted suits of armor (ACT #767).

We find out later that Prankster is under the advisment of the devilish Lord Satanus who is responsible for his physical transformation. His old self, his 'soul' really, is safely with Satanus in the underworld while his new guise is out terrorizing innocents. He gathers Dr Kitty Faulkner/Rampage, Rose Forrest/Thorn, and a boy named Cary Richards/Adversary all to Lord Satanus and his demon Mr. Mudge (AOS #585). The alter egos split, Satanus offers them a deal similar to that of the Prankster which the two women deny (AOS #586). Cary unfortunately is taken and believes he will be provided with training for his mysterious psi-abilities that create the Adversary by Satanus. All of this is done with little if any help from Prankster. Satanus lets Prankster know that he is 'souly' present to amuse him by changing him back to his previously ugly form. Satanus seems to take an interest in Supergirl after learning that she did not perish at the hands of Carnivore like previously thought. While the Earth Born Angel part of her persona has seemed to abandon her, he sends the Prankster out after her. If the two can be split like so, he may want to use them for his own designs. After performing all the tasks Satanus had for him Prankster seems to have dissappeared from the scene. In the Underworld Satanus, while watching his new prize Superman in chains has Prankster's soul's tounge ripped out. What effect this has on Prankster's new body, only time will tell. Superman on the other hand, with help from Lois, defeated Satanus' dream world and fled with Cary Richards in tow (AOS #588).

The Prankster was hired by Lex Luthor to create a complicated distraction in the city of Metropolis so that Lex could break the Kryptonite Man out of prison. The Prankster somehow infused traffic signals with giant men that began wreaking havoc until Green Lantern and Hawkgirl stop them. The prank is successful however, in that it allows Luthor, Oswald's client, to pull off the prison break. Because of this success and the unbelievable pay it must have supplied him, the Prankster has now gone into a different kind of business.

Later, the Prankster was seen operating in a secret, very high tech lair underneath a joke shop called "Uncle Olley's" and now sells his pranks to anyone who can afford them for whatever crime they're trying to pull [SUP #660 (Mar 2007)]. Within his lair, there is a trap door where, after someone speaks the password: "I got business with my Uncle," the individual is dropped through the floor to meet with Loomis. Such as in a more recent case, where a wanna-be gangster named Nitro G, who had the meta power of creating explosions from nitroglycerin he could manifest, came to him for assistance in distracting Superman so he could rob some banks to "...pile up some more green..." Because the prank was to be on Superman, Prankster tells Nitro G there will be 10% OFF and sets to work.

This most recent prank involved the Prankster floating above the city in a giant bubble while causing marathon runners to slip on banana peels and showering the police in glue. That way when Superman showed up, which Loomis knew he would, Superman would have to save the police so they wouldn't suffocate and the Prankster would get away, which he did.

Afterward though, Nitro G, who'd had a successful bank robbery thanks to the Prankster's prank, became greedy and wanted some of the Prankster's glue guns for himself, to which the Prankster told him no. G threatened Loomis and Loomis pretended to be afraid just long enough to set up G and his friends with a prank on them and he got them arrested on their next job because everything went wrong. In the end, the Prankster squirted Nitro with Diatomaceous Earth Sodium Carbonate, otherwise known as dynamite. The reaction of those chemicals with Nitro's nitro would presumably kill the gangster, but Prankster knew Superman would arrive and that setup would be just one more prank to which Loomis would escape, and he did.