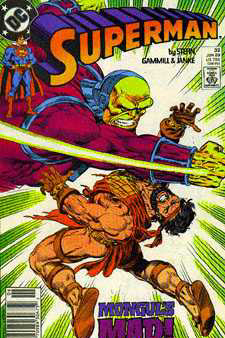 Former ruler of Warworld. This alien warrior forged an alliance with the Council of Overseers to act as ruler of the artificial planet they had engineered. Mongul used the artificial planet, dubbed Warworld, to travel the galaxy enslaving people and gathering an army culled from gladitorial battles. In outer space one of his slaveships picked up an unconscious Superman. Superman was forced to battle in Mongul's arena, but refused to kill the aliens he defeated. When Superman defeated Mongul's champion Draaga and refused to kill him, Mongul decided to fight and kill Superman. When Mongul planned to finally kill Superman, the Cleric transported Superman away. Warworld's Overseers decided to replace Mongul with Draaga, after Superman dishonored Mongul, and so Draaga forced Mongul to flee. Later Mongul was found and controlled by the Cyborg who had him assist in his plan to transform Earth into a second Warworld. When Mongul tried to escape Engine City after deciding the Cyborg was unstable, he found himself fighting Green Lantern (Hal Jordan). Later, Mongul was apparently killed by the demon Neron.

Mongul's son (also called Mongul) crashed to earth, asking for Superman's help in defeating a common enemy known as Imperiex (SUP #151). The two trained together, before temporarily thwarting Imperiex's plans, where upon Mongul turned on Superman (in revenge for the dishonor brought on his father), but Superman quickly defeated him, allowing Lobo to take him as bounty (SUP #153).

Mongul Jr. reappeared in Metropolis soon after, accompanied by his sister Mongal. Together they fought against Superman and Krypto, before Krypto nearly killed Mongul, who was then taken into custody by the DEO. Mongal escaped via a Boom Tube (SUP #170).