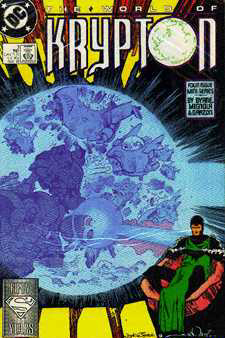 One of the planet Krypton's greatest scientists. Jor-El researched the mysterious Green Death that was killing Kryptonians across the planet. He deduced that a chronic chain reaction within the core of the planet had caused vast amounts of pressure to build inside the crust. Those unnatural pressures began to fuse the planet's native elements into a new metal. This metal was highly radioactive and extremely deadly to the inhabitants of Krypton. Those same pressures that created the 'kryptonium' were building to a point that the mantle would no longer be able to contain. Krypton in his estimation was doomed by a terrible release of the pressures, one that promised the destruction of the planet.

Planning for this eventuality, he took his son's matrix from the gestation chambers and fashioned a vehicle equipped with a hyper-light drive designed to propel a starship through hyperspace. Jor-El saw Kryptonian society as cold and heartless, stripped of all human feeling, passion and life. He wanted something better, something more for his child. In his search for a suitable place to send his son, he came upon Earth, the third planet in a small solar system orbiting a yellow star. He knew how the solar energy would build in his child's cells making him incredibly powerful. He also realized that with the difference in planetary structure and gravity that his child's cells would be extremely dense and that he very well may be able to move counter to the lower gravity (MOS miniseries #1).

At the time of the cataclysmic upheaval, he and Lara Lor-Van, his mate, were together in his laboratory discussing the child's possibilities for life beyond Krypton's fiery death. They saw their child's birthing matrix rocket away from Krypton as the planet destroyed itself. Their son, the legacy of all that was once great in their world would reach his new home on Earth. Through the child's development his powers grew as his father expected they would. In time he would be recognized the world through as Superman.

Superman's world was turned upside down as a rocket again fell from the sky to the Kent farmstead in Kansas (SUP #166). This peculiar craft delivered a single green isobar. This isobar, attached to a specialized device Professor Hamilton designed would be able to translate the communication directly into Superman's mind. Upon doing so he encountered Jor-El. This time Jor-El had different news to share with him. He shared that he had intentionally mislead his son to believe that Krypton was a cold emotionless world to help him embrace his adopted home. He explained that he waited to reveal the truth that Krypton was actually a loving place, similar to Earth.

The story is different but runs along the same lines. Krypton is orbiting its red star closer every revolution. Soon the gravitational forces would be so that the planet would literally explode from the pressures exerted on its core. He could not convince the members of the Kryptonian Council that there was a danger to their very existence. Quite the opposite, the head of military operations, General Zod believed Jor-El a madman trying to usurp the government. In the end he was very, very wrong. The time came when the instability was too much and Jor-El, with his wife, Lara Lor-Van, entered the laboratory where the prototype Space Arc was housed. They placed baby Kal-El inside and sent him off to a new home on the planet Earth as the planet was destroyed as it spiraled closer to the red sun.

Superman had even more cause to question this story as Professor Hamilton and Doctor Irons began to monitor Kryptonian signals coming from deep inside the Phantom Zone using the remote monitors from Steelworks. Hamilton fashioned devices that allowed Superman and Lois to descend into the Phantom Zone to the coordinates of the communications they were receiving. They found themselves on Krypton, in a city called Kryptonopolis (SUP #167).

They encounter Jor-El and Lara along with Krypto, the family dog. Jor-El shows Superman the wonder of his work and Superman helps him stabilize the planet. During that stabilization Superman is brought to the edge of his power reserves and was unable to get back to the planet. A rescue vehicle was launched into the planet's atmosphere with Lara at the controls. This rescue was in direct violation of the Edicts set down by the Imperial Council of Krypton. General Zod was more than willing to bring this to their attention and sent the Eradicators to the domicile to collect Jor-El, Lara, and the two unregistered life forms they are harboring. They destroy the electronic minions of the Council and flee as fugitives.

Through their flight from Zod, they encounter allies and have an eventual showdown with Zod and his army. Zod is seemingly defeated and Jor-El reveals that he knew the truth about Superman... Kal-El's... parentage. Not knowing if this Phantom Zone created simulacrum is authentic or not, Superman is reunited with his birth-parents before Jor-El was able to reconstruct a device similar to Hamilton's to send them back through the Phantom Zone home to Earth. Though he eventually learned that the Krypton he visited was merely a simulacrum and that Jor-El was indeed dead, Superman was grateful to finally be able go home again.