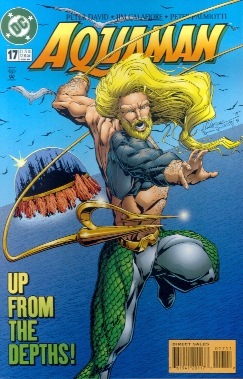 The King of the Seven Seas is one of Superman's best friends, and a cornerstone of the Justice League of America! Aquaman is the one and only champion of the aquatic kingdom, and a great defender of justice. The rightful Prince of Atlantis, young Orin was exiled from his homeland, for possessing the Curse of Kordax - the ability to telepathically communicate with the many sea creatures of Earth. He was rescued from the dangers of the open ocean by Porm, a kind and gentle dolphin; then raised as a human by Arthur Curry.

By the time Arthur reached adulthood, his full powers were in exhibit. His ability to communicate with sea life was augmented by superhuman strength, and the naturally heavier bonestructure accorded to all Atlanteans and undersea dwellers. As Aquaman, Orin became one of the first environmental activists of the modern world; championing the preservation and safety of the Earth's oceans. As the rightful ruler of Atlantis, he reclaimed his birthright, and managed to save his sea kingdom from several menaces, including encounters with super-villains like The Ocean Master, Black Manta, Captain Demo, The Flying Fish, The Scavenger, Cutlass Charlie, The Fisherman, Magneto, Torpedo, and Claw. And while there were many, many villains to battle, Aquaman's world contained many joys as well, including

Aqualad - a youth who was exiled from Atlantis because of his purple eyes, Garth was found by Aquaman, and became the Sea King's pupil, surrogate son, and ulitimately, friend. As Aqualad, Garth aided the adult Aquaman in his early adventures; then became a member of the original Teen Titans.

Mera - A native of another dimension, Mera regained her throne with the help of Aquaman and Aqualad. But love persuaded Mera to abandon her kingdom, and become the wife of Aquaman, and queen of Atlantis. With her power to control water, she aided her husband on numerous adventures, and gave birth to...

Arthur the Aquababy - the precious and tender son of Aquaman. Inheriting the powers of both parents, Aquababy displayed his talents at an early age, and was a sign of not only the loving union of the Royal Family of Atlantis, but of the bright, golden future that was possible for the kingdom.

But just as Aquaman's world reached its apex, it soon took a drastic descent into darkness...

The successive tragedies took their toll on Aquaman, who then became a grim, lonely adventurer. Even when the Justice League was ultimately restarted by other founding members, Aquaman stayed away from the group which brought him the most fame. And when things could not get worse, a freak incident led to the loss of his left hand. So many misfortunes would have broken a lesser man; but Aquaman prevailed! Overcoming all obstacles, the Sea King lived up to his name, and found new life alongside Dolphin, a female undersea adventuress, and renewed his friendship with the now adult Aqualad - now named Tempest.

The adventurous trio worked to usher in a new Golden Age for Atlantis, and Aquaman also became a member of the new JLA - a revival of the original Justice League members and their modern namesakes. While the action seemed unlimited, at least Aquaman was given new hope, a new sense of purpose, and even found new romance of sorts - with neverending flirtations between himself and Wonder Woman. A new menace threatened his world, when the intergalactic conqueror Imperiex invaded Earth. In order to save Atlantis, Aquaman and his kingdom were transported to the ancient past of Atlantis, an enigmatic Obsidian Age. Gamemnae, a wicked sorceress, enslaved the denizens of Atlantis, and put Aquaman's life in great peril. After months of investigation, Tempest led the Justice League of America to this Obsidian Age, where the heroes rescued their comrade and his people. But a new wrinkle was thrown in:

Defeated by the JLA, Gamemnae put a curse on the Sea King, turning Aquaman's people against him. What would have been praised as a magnificent display of heroism by Aquaman, led him to be banished from Atlantis by Mera - now the established queen of the kingdom. Submerging Atlantis into the depths of the ocean once more, and bringing Atlantis to its rightful place in modern times, led Aquaman to be villified by his own people. And now, the sorcerors and Mera have made the seas deadly for Aquaman - the sealife once in Arthur's control, has now been turned against him. The oceans are no longer safe for our hero. A new destiny is in store for Aquaman...and however Superman can assist his friend, only time will tell.

Most recently, Aquaman had become the hero of Sub Diego, a portion of San Diego that sunk beneath the Pacific Ocean and, due to the machinations of an evil scientist, the inhabitants gained the ability to breathe underwater.