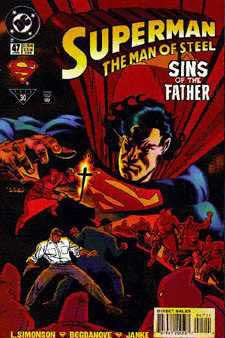 Editor of the Daily Planet. Born in Metropolis's Suicide Slum area, Perry grew up with a father missing after going to fight overseas. He became a copy boy at the Daily Planet beginning his lifetime career that would make him a successful reporter, and eventually the Planet's managing editor. Perry had met Lex Luthor when they were kids, and later when Luthor began diversifying his holdings in the new LexCorp company, Luthor moved into the Planet building and purchased the newspaper. Although, making the paper profitable, Luthor sold it after deciding to pursue technology and television investments. Perry's exposure to Luthor during this period made Perry suspicious, despite Luthor's public image as a benefactor to Metropolis. Turning down an offer from Luthor to become part of Luthor's new tv station WLEX, Perry found an investor who saved the Daily Planet on condition Perry became editor instead of being a reporter. Perry married Alice Spencer and had a son Jerry White, Jr. Later Perry would learn that Lex Luthor was Jerry's natural father after Luthor had briefly seduced Alice while Perry was reporting overseas. Perry White's newspaper savvy made him hire two talented reporters, Lois Lane and later Clark Kent. After Jerry White Jr died following being shot (see Blaze), Perry and Alice grieved for some time, including having Perry take a leave of absence from the Daily Planet. Later, they helped care for an orphaned boy (Keith Robert) and decided to adopt him. Recently, Perry began having chemotherapy to treat lung cancer, and argued with Franklin Stern over hiring a new columnist. When Lex Luthor bought and shut-down the Daily Planet, Perry went on to teach Journalism at Metropolis University before returning to the Planet when Lex Luthor mysteriously sold it back (SUP #151).