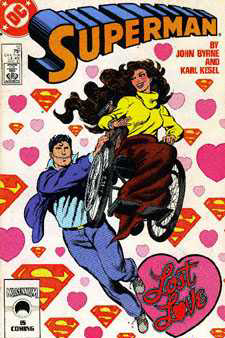 A mermaid, and Clark Kent's first love. Clark met Lori when he was a senior at the University of Metropolis. Lori was confined to a wheelchair, and always had her "legs" covered by a blanket. He fell in love with her, and asked her to marry him. After she refused, he discovered she was a mermaid from the lost continent of Atlantis. She returned to the ocean, but a few years later, Clark summoned her to a meeting. Then she was stabbed by a fisherman. She was treated in the undersea city of Tritonis by a doctor named Ronal, whom she fell in love with and married (SUP #12). Later Superman was told she had died. But she had not, and, saved Superman's life (SUP #63), admitting to herself that he was the only man she would ever love. Her husband, Ronal, became a magician, and was corrupted by his power. One of his magic spells gave Lori legs whenever she is dry, allowing her to live a life in Metropolis (AOS #532). (She reverts to a mermaid when she gets wet.) When Lois called off her engagement to Clark, Lori made it clear that she was interested in resuming their earlier relationship, but Clark wanted no one but Lois (AOS #538). Although Lois was jealous of Lori for a bit, they became friends, and Lori was one of the bridesmaids at Lois and Clark's wedding. Lori got in some trouble after selling several ancient artifacts recovered from sunken ships, when questions were raised about just how she found them. She soon after went to South America on an archaeology expedition (AOS #549).

In a mysterious appearance that has yet to be explained, Lori Lemaris showed up at the Daily Planet looking for Clark Kent who was not around at the time (SUP #162).