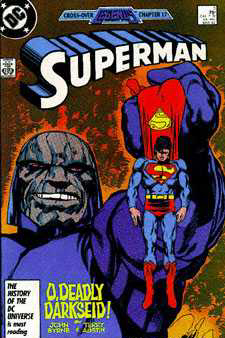 Uncounted ages ago, the homeworld of the Old Gods split asunder, shattered by Ragnarock, their final war. Out of this Cataclysm were born two worlds. New Genesis, the bright and beautiful planet of renewed hope watched over by Highfather of the New Gods. The other planet, spinning forever in the shadow of it's sister world, dark and sinister Apokolips. The cruel and merciless Darkseid rules this world and all of its inhabitants. He sent forth his Omega Beams to Earth to bring Superman to him (SUP #3). Superman, in his guise as Clark Kent, did not realize these seeker beams were meant for his alter ego, the beams connect and transport him to Apokolips before Darkseid. Darkseid, surprised that his Omega Beams could have faltered, disposes of Kent by throwing him out the window. Superman, after surviving the extreme heat of the Fire Pits, ends up leading a short-lived resistance on Apokolips. Unfortunately the denizens of this world do not know anything but their Lord, Darkseid and swiftly fall back into his servitude.

A resurrected Doomsday plagued Darkseid after the asteroid the Cyborg Superman tied him to came into Contact with a vessel on course to Apokolips. Doomsday wrecked havoc upon Darkseid's forces and then withstood his Omega Beams bringing Darkseid to his knees. Superman learned that Apokolips was having troubles after Desaad called the JLA for help in locating the New Gods. Superman sets off for Apokolips with a Mother Box as his guide. He finds to his astonishment the Cyborg, Hank Henshaw and.... Doomsday. After helping a mortally wounded Darkseid with the Mother Box, Superman confronts Henshaw and tries unsuccessfully to stop Doomsday on Apokolips. Darkseid traps Henshaw's consciousness with his Omega Beams and Superman goes after Doomsday, a trip that leads to depositing Doomsday at the End of Time where he was destroyed. Darkseid is in Superman's debt for his saving his life. Soon after, a body that mysteriously appears in his tomb plagues Superman. He goes to Apokolips to confront Darkseid and finds no answers. While Darkseid knows of his troubles he was not involved. He sends Superman back to Earth and feels the debt repaid. When Kalibre, one of Darkseid's assassins, makes an appearance in Metropolis, Superman is once again forced to go back to Apokolips because of his conscience. When he was last there, he defeated an army of Granny's soldiers. Darkseid ordered Kalibre to kill them all, including his own daughter, Buna. Superman bargains with Darkseid for the lives of the soldiers and Darkseid sends him back to Earth. Then Darkseid releases the Cyborg's consciousness and sends him away from Apokolips. Darkseid only deals with Superman when it benefits his own agenda. He is content to rule his planet and bide his time until opportunity arises.

Darkseid played an integral role in Our Worlds At War, when the threat of Imperiex came to claim the Earth and destroy existence. He allied himself with Lex Luthor, only to be "betrayed" accidentally by Brainiac 13 when the Lexcorp towers fired a blast into Apokolips. He also took John Henry, mortally wounded, back with him.

The war ended with Darkseid taking custody of Doomsday and an uneasy peace. Superman, along with members of the the Superman family, went to Apokolips to retrieve John Henry's body. They managed to save him, but Darkseid released Doomsday.

Recently, Doomsday was released by an angered Darkseid on Earth, and Doomsday plotted to take Kara, the new Supergirl, into his thrall. Doomsday is still at large, but he failed to keep Kara through the combined efforts of Superman and Batman.