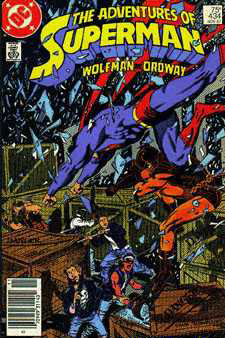 (Jose Delgado) - former crimefighter in Metropolis. Jose Delgado grew up in the Metropolis area known as Suicide Slum, becoming skilled in boxing. After working with Lois Lane to investigate one of Lex Luthor's plots, Delgado adopted the crimefighting identity of Gangbuster. After suffering a spinal injury saving Lois, while recovering with the assistance of an implant, Delgado found someone else masquerading as Gangbuster. This turned out to be Superman suffering mentally after fighting Brainiac and killing three deadly criminals in a "pocket universe" (see Supergirl). After recovering Delgado found the implant was a LexCorp device and that Luthor controlled his body. Luthor forced Gangbuster to attack Prof Hamilton, who was able to alter the implant. After again recovering Delgado's life fell apart and he had trouble keeping jobs. Delgado has had relationships with Lois Lane and Cat Grant. Delgado occasionally operated as Gangbuster but eventually left Metropolis following Superman's apparent death, considered a fugitive by the Metropolis police.