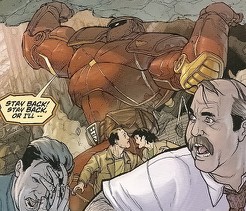 In September of 2006, long-time Blue Beetle foe Carapax, tussled with Superman on the streets of Baltimore. Carapax: Originally Conrad Carapax, an archaeological rival of Dan Garrett, the original Blue Beetle. Carapax followed Garrett to a place called Pago island years and years ago on the day that Garrett was killed, touched an experimental wire in Jarvis Kord's laboratory and inadvertently transferred his brain into a Kord robot.

Now, according to Superman, Carapax, who once called himself Carapax the Indestructible Man, is a brilliant scientific mind "fused into a suit of alien armor." According to Superman, Carapax' brain is trapped in the suit and Carapax continually searches for a way out. Carapax was searching for circuitry only available in Baltimore and he started tearing the town apart. Superman intervened, attempting to use his heat-vision to stop the villain, but Carapax' new Thermocouple Converters convert the heat-vision to strength and Superman began having more difficulty. Then Firestorm arrived, intent on turning the suit to a gas in order to remove it from the man he assumed was inside. Superman explained to Firestorm that Carapax wasn't inside the suit but rather the suit itself and that turning the suit to gas would kill him. So instead, Firestorm turned half of the copper wiring in Carapax to germanium, cutting off his energy supply and knocking the villain unconscious. Baltimore police then took Carapax away with a crane [Action Comics #841 (September 2006)].