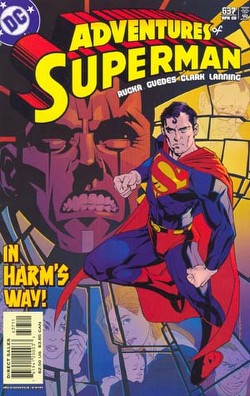 Ruin, an enigmatic figure in a mask and a trenchcoat, first appeared when he took over STAR Labs and held Superman at bay with Xlim, who he tortured into helping enact his plans.

Obsessed with how he believes Superman will eventually destroy the Earth, Ruin is merciless in his attempts to hound Superman using technology and raw power. He has many technological tools at his disposal, and was shown working at the behest of a Lex Luthor in hiding.

After much mystery and tragedy, Superman's friend Pete Ross was vindicated when the enigmatic villain Ruin was revealed to be... Professor Hamilton!!! The last time we saw Hamilton, he scurried away in disgrace as his Overmind alter ego was revealed to Superman and his friends. Apparently, Hamilton, escaped into the shadows, and re-emerged as Ruin. His sole intent was to discourage Superman, and harm the Man of Steel's closest friends. Hamilton believed his ruination was at the hands of Superman, and so he wanted to destroy the legendary superhero and his close friends.

As Ruin, Hamilton succeeded in framing Pete Ross, then led Superman into a deadly face-off. Even as Superman clearly overwhelmed Ruin, the malicious mastermind tried to detonate a bomb on his armor, and leave life causing massive devastation along several blocks in Metropolis. Superman wouldn't have it, and removed the bomb from Ruin's form, hurled it skyward, and saved the city from wanton destruction. It's assumed that Professor Hamilton will now be safely incarcerated, and his threat to Superman and Metropolis neutralized... for now.