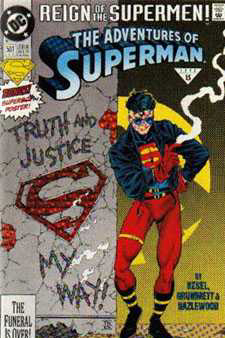 After Doomsday apparently killed Superman, Superman's body was taken secretly to the Cadmus Project where director Paul Westfield attempted, without government authority, to clone Superman. The attempts at cloning Superman were at first unsuccessful because the Cadmus scientists could not replicate his kryptonian DNA, but other cloning experiments eventually resulted in the individual now known as Superboy. Initially, Superboy's powers were limited to a "tactile telekinesis", involving a telekinetic field similar to Superman's aura. The TTK allows him to fly and simulate super-strength, and gives him considerable invulnerability. After first believing himself to be a clone of Superman, Superboy later learned he'd been engineered from human tissue, with the DNA altered to make him look like Superman and give him his TTK abilities. After Superman's return to Metropolis, Superboy has spent time in Hawaii, and has worked with Cadmus. At first unofficially "adopted" by Superman and given the Kryptonian name "Kon-El", Superboy later went to live with Clark Kent's parents in Kansas, becoming known as their nephew, Conner Kent. More recently, it's been learned that the "genetic engineering" that produced Superboy included splicing a great deal of Superman's DNA into the human DNA Kon-El was made from, making "the kid" half Kryptonian, and Superman's actual offspring after all. It was revealed that the other half of his DNA came from Lex Luthor.