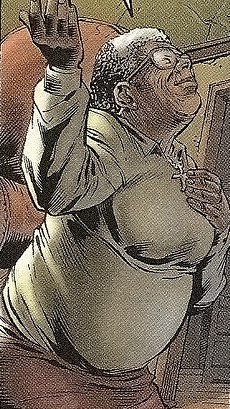 With a cover date of February 2007, Superman #659 introduced us to Barbara Johnson, an extremely religious woman who believed Superman was a heavenly angel and consistently put herself in peril because she was sure he would always be sent to save her in the nick of time.

In his Fortress of Solitude, Superman ponders a solution to god-like visitor Arion's insistence that Kal-El must stop being the savior that he is or he will inadvertently assist in the downfall of humanity, when he recalls Barbara Johnson. He met her during his first year in Metropolis when, while soaring through his rounds, he spotted Barbara about to get run down by some drunken teenagers and intervened. Superman took the boys to the local precinct and bid Barbara farewell. A few minutes later while watching the news at her home, Barbara saw that an elevated train had derailed in Chicago. She immediately began praying and in seconds, Superman arrived on the scene to save the day. Barbara then became convinced that Superman was an angel from God and that he would always be sent to save "us," so long as we "...believe" and "have faith..."

After that, Barbara started searching for criminals and confronting them, all the while "knowing" that God and Superman would be there and each time Superman was. Eventually though, Superman was indisposed in Antarctica stopping an energy being from reeking havoc on the world, and he was unable to stop Barbara from being shot. Barbara had hunted down a local Hob's Bay gang called the Bay Lords (also called the Bay Demons), and confronted them about their crimes. They warned her to leave and told her to mind her own business or she'd see how powerful they were "...in a world of hurt." Superman, meanwhile, could literally hear Barbara whispering prayers from the other side of the Earth, but couldn't break away from his battle in time.

Although Superman, still finishing his battle with the "space traveller" who had inadvertently become entangled in Earth's magnetosphere, could hear her gasping for breath and gurgling blood, Barbara survived. When Superman went to visit her in recovery she told him it wasn't his fault and that because of him she had still brought down the gang.

After healing, Barbara founded several community programs and continued to be a great religious leader. Superman, with her faith in him reminding him how much he means to so many people, remains resolute that he cannot, as Arion demands, give up his vigil.