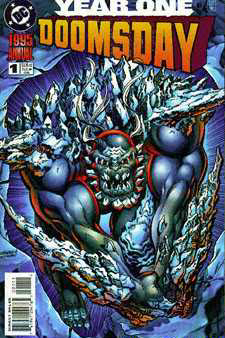 A genetic killing machine created long ago on one of Krypton's moons by scientists doing genetic experiments designed to further cloning research. Doomsday has the power to regenerate after being killed by an opponent. When regenerated, Doomsday has gained immunity to the previous cause of death. Possessing amazing levels of strength and resistance, this uncontrollable killing machine has managed to cause havoc on several planets, including an assault on the Guardians of the Universe's planet Oa. After one defeat Doomsday was left bound and imprisoned in a vault buried in the United States' midwest. Over time Doomsday recovered and eventually broke free of the vault. In only hours, Doomsday managed to blaze a trail of destruction moving East, easily defeating the available superheroes. Only Superman was powerful enough to stop him, and finally managed to apparently kill Doomsday in Metropolis in front of the Daily Planet, before himself collapsing apparently dead. Doomsday's body was examined by scientists before the Cyborg Superman sent Doomsday's body into space. In space, Doomsday revived and eventually reached the planet Apokolips. With assistance from the time traveler Waverider, Superman fought Doomsday again and left Doomsday trapped in the time stream.

Doomsday was retrieved by Prin Vnok, an assistant of Brainiac, in an attempt to transfer Brainiac's consciousness into his body (Superman: The Doomsday Wars mini-series). Brainiac/Doomsday defeated the JLA and took Pete Ross and Lana Lang's newborn son to grow into a more controllable Doomsday. During a battle with Superman, Brainiac's mind left Doomsday's body, allowing him to go on a rampage. Superman tricked him into a JLA transporter tube that took him to the moon. The JLA and Superman managed to trap Doomsday in a continuous transport cycle where he will hopefully remain. In the event that someone tampers with it, Doomsday will be transported to a location known only to Superman.

Lex Luthor (as President) sent a group known as the Suicide Squad, aided by Steel, to retrieve Doomsday from the moon in a wild plan to stop the invading entity known as Imperiex. Most of the Suicide Squad were decimated in the attempt, but Manchester Black managed to mentally persuade Doomsday to concentrate on attacking Imperiex. Doomsday (alongside Superman) destroyed all of the Imperiex Probes before being vaporized by Imperiex Prime, removing the skin from his bones and leaving the once-powerful killer a glowing skeleton in space (AOS #594).

Again returned to life (possibly due to some involvement by Lex Luthor), Doomsday was released from his holding cell by the Joker (who at the time was Jokerizing villains across the world). Now a sentient being, Doomsday once again battles Superman. Superman, having learnt much from the recent war with Imperiex, stops Doomsday, teaching the sentient monster a hard lesson about mortality. Luthor hands over Doomsday's body to Darkseid in a shady deal. (SUP #175)

Doomsday did battle with the Superman family on Apokolips (Apokolips Now!), but remained on the planet.

Darkseid released Doomsday upon Superman (ACT #814), apparently more intelligent than ever before due to experimentation.

In the climactic final battle with Gog, Doomsday, enraged, attacked, wanting to be the only person to kill Superman. In the far-flung future, Superman managed to redeem both Gog and Doomsday, who turned to fight for good and rescue Superman in the present. In the end, Doomsday faded away, but as the time stream is an ethereal thing, the evil Doomsday is likely still out there, somewhere...