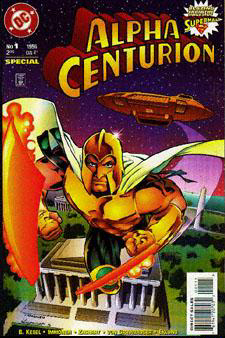 Superman first encountered a hero called Alpha Centurion when Superman found himself in an alternate timeline. In the alternate timeline, Superman did not exist and Metropolis' hero was the Alpha Centurion who had a romantic relationship with that world's Lois Lane. Later, an individual calling himself the Alpha Centurion arrived in Metropolis, saying he was Marcus Aelius, who had been taken from ancient Rome and spent several years with aliens before returning to Earth now with a spaceship (the Pax Romana) and other alien technology. The Alpha Centurion joined forces with the then current leader of LexCorp, the Contessa. After Superman was arrested by an alien tribunal, the Alpha Centurion organized a "Superman Rescue Squad" of Superboy, Steel, Supergirl, and the Eradicator to assist in rescuing Superman. The rescue squad found they also had to deal with the Cyborg as well, before returning to Earth with Superman. Marcus has shown interest in Lois Lane. After Lex Luthor secretly caused members of Team Luthor to attack at a public dinner, the Centurion was publicly embarrassed, and told Lois Lane he would leave Metropolis. He was last seen in Washington D.C.