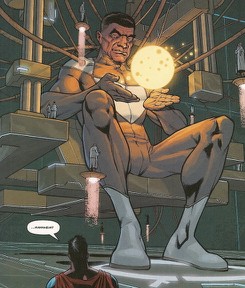 Bruno "ugly" Mannheim's name has been synonymous with crime and with the criminal organization known as Intergang as long as he's been around. Mannheim has held multiple positions within Intergang, not least of which was its esteemed leader. Originally, Mannheim's boss was Morgan Edge. After Edge had a heart attack due to the stress of being found out by Superman, Mannheim took over as interim boss but then turned traitor to Edge, gave him up as Intergang boss, and then took over himself. Mannheim always had close connections to Apokolips, as did Intergang in general, but it is often suspected that Mannheim may have been actually sent from Apokolips initially, with the intention of controlling the powerful crime syndicate from various positions throughout the years. Because of his connections to Apokolips, Mannheim has always been able to escape absolute justice by opening a Boom Tube.

In his most recent appearances, Mannheim has seemingly become even more evil, at times even eating those who will not follow the order of the "Bible of Crime". He has somehow resurfaced as the leader of Intergang once more, even though the position was taken from him some time ago. Now he wants all of Intergang to establish a new crime order, following his "Bible" and killing whomever won't fall in line.

Later, when Superman thought he was taking more, much smaller Intergang lackeys down, he discovered that Mannheim had somehow grown to be over several stories tall (Superman #654). Superman hadn't seen Mannheim since he was caught in a collapsing Boom Tube that Superman himself had destroyed as Mannheim was going through it. Scanning the machines connected to Mannheim after he stormed the warehouse Mannheim was held up in, Superman realized that the equipment is like nothing on Earth and that they were linked directly to Mannheim's circulatory system.

Mannheim tells Superman during this meeting that Intergang is finally and once again pulling out of Metropolis but not before one last hurrah. He claims that something called the Catastrosphere will begin to mirror his heartbeat and that when it does the implication is that something terrible will begin to happen in Metropolis. Superman punts the sphere away, telling Mannheim that something like that shouldn't be in his hands but Mannheim cries, saying that hundreds of sub-spheres throughout Metropolis will go inert if the Catastropshere stays too far out of range and Superman likes that just fine. Then, after being threatened bodily harm from Mannheim: "I'll pop you like a grape..." Superman melted the floor around him and Mannheim was stuck in place. However, before Superman could find out exactly how Mannheim had become the way he was, Mannheim told him that he's not working with Darkseid this time, not even close. He further insists that "they," the ones he's working for now, put him through quite an ordeal and that once they find out he's failed them again... But before he can finish his sentence, Mannheim is teleported away by some sort of beam from the sky and Superman floats above the spot where he was, looking on.