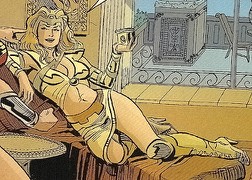 In April of 2007, Superman #661 brought us Khyrana, a "Dangerous Lady" from ancient times who was cursed by Zeus after turning him down for love. From that point forward, Zeus told her, she would "burn with need for the touch of others." Khyrana, an unparalleled sought after beauty at the time, was now to suffer for all time and never be satisfied, no matter how much attention, favor and "touch" she acquired. The effects of the curse led Khyrana to seek out mortal after mortal, leech him of all his energy, eventually killing him and then move on. Zeus's curse would never allow her to die so she was set to wander the Earth forever, draining and killing and never fulfilling her hunger.

At an art show in Metropolis, attended by Clark Kent, Lois Lane and Diana Prince, Khyrana arrived set to claim all of the objects she stated were rightfully hers. Clark attempted to stop her and she sensed great energy within him. As Khyrana drained Superman of all his energy making him weak and disoriented, Diana stepped in and tried to stop her. Khyrana tossed Diana aside and took off with a weakened Superman in tow. Lois and Diana came to and figured out who Khyrana is, Diana telling Lois the ancient tale, and then Diana, as Wonder Woman, went to rescue Superman. When confronted by Wonder Woman, Khyrana decided to drain her as well, but then when Superman stepped in the two energy types didn't mix well and the heroes were able to subdue Khyrana.

Khyrana was then taken away by the Metropolis Science Police to be isolated and perhaps sedated. Superman hopes the sedation will temper the ill-effect of the curse on her until they can figure out some way to permanently deal with her. Diana plans to appeal to the gods since the start of all this lies with Zeus.