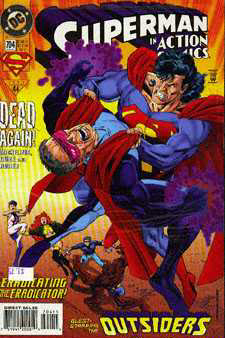 Months later the Eradicator returned to earth to warn Superman about the approach of Imperiex, however rash moves by Professor Hamilton saw the Eradicator angered into taking matters into his own hands. Superman use the Theta state which keeps the Eradicator distracted with a giant projection, Superman flies into the Eradicator's body and uses their psychic link to flood the Eradicator with images from the other (new) Krypton. Unable to comprehend the thoughts assaulting his mind, the Eradicator begins to break up, separating the bulk of the remains of the Fortress from the body of David Connor. Gathering up the wreckage, Superman and S.T.R.I.P.E. return to the Steelworks where they employ the absolute zero chamber to freeze him (MOS #114).

He was later released, reveling in battle and attacking Majestic. After several battles, Eradicator came to trust Majestic, and aided him in repelling Daemonites.

When the arctic Fortress of Solitude was destroyed, the Eradicator unwittingly became trapped within the rubble, finally being released thanks to John Henry Irons. Confused and angered, the Eradicator attacked both Superboy and Superman, before being knocked out by an OMAC unit.

The Eradicator remains a strange and uneasy ally to the Man of Steel.