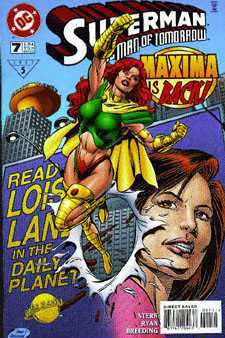 Oldest child of the Royal family of the planet Almerac, the fiery-tempered Maxima came to Earth in search of a suitable mate. She and Superman are genetically compatible; she could give him what no Earth woman could - children. She was infuriated when Superman rejected her offer, saying he had no desire to father despots (ACT #652). Although Maxima feels herself superior to Earthlings, she joined the Justice League to battle Brainiac who had destroyed Almerac with the WarWorld and helped in the fight against Doomsday. She offered herself to Superman again, hoping that her recent good deeds would offset her earlier ruthlessness. (The Wedding Album, MOT #7) Superman, now married to Lois Lane, was even less interested in her proposal than before. Angry and humiliated, she joined the Superman Revenge Squad. She swore that Superman had rejected, humbled and humilated her for the last time, and threatened that the next they met, it would truly be war (MOT #10). However, recently Maxima and the 'Chosen People of Almerac', as she phrased it, showed up in Earth's solar system where they met up with Superman and fellow JLA member, Green Lantern. Superman and Green Lantern were just beginning to investigate the disturbing disappearance of Pluto and the even more distressing engine ion trail associated with Warworld, when they stumbled across Maxima, her people, and Massacre. After a battle full of wounded pride, Maxima eventually conceded her position when Almerac's rendezvous showed up using a Boom Tube. She explained that she was leading her people to safety from Imperiex, the force that concurred her world. Massacre, as we know seemed to meet his death back in Superman #106, somehow Maxima came across him and described her association in these words, "Massacre serves only me now". To save her people she allied herself with Darkseid's son, Grayven, who was taking them to regions unknown. This was also being undertaken without the knowledge of Darkseid. Hence Grayven's words, "Get your people inside the boom tube before my father becomes aware or all is lost." Maxima left Superman with these words: "Mark my words, when Imperiex comes for your precious homeworld, you'll see alliances you've never dreamed of."

All that Maxima warned eventually came to fruition as she and a miriad of other characters (both heroes and villains) formed alliances with Earth and Apokolips in an effort to destroy Imperiex (MOS #115).

Maxima ultimately met her demise in an heroic effort to put her ship between the destructive beams of Brainiac 13's Warworld which would have resulted in the destruction of the entire universe (MOS #117).

An alternate history where Superman marries Maxima after Lois dies was presented as an Elseworlds story in AOS Annual #3.