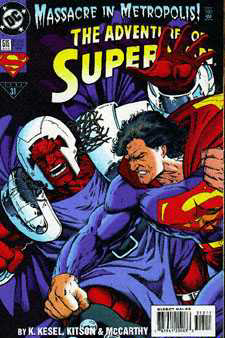 An alien fighter who enjoys hunting down others as prey. Superman first encountered Massacre while in outer space and fought with him, before Massacre escaped. Massacre vowed he'd fight Superman again, and later came to Earth and again battled Superman this time in Metropolis, but Superman finally figured out how Massacre could anticipate Superman's actions. Massacre again left Superman taking the dying body of his scavenging alien companion Skimmer.

When Superman was being held by an alien Tribunal he saw Massacre also appeare before the Tribunal. The warrants out for his arrest for the hundreds of thousands of murders he has committed finally brought him in front of this self appointed arbiter of Justice. He was sentenced to death, a death given to him by the survivors of those he had killed. Massacre was mobbed and beaten until his eventual death. Apparently Massacre did not die during his sentencing by the Tribunal (SUP #106). Then again, Superman himself has been dead before. Maxima seemed to hint that Massacre serves only her now, leading one to believe he was under the direct control of someone else. However he fits into everything, Massacre is now allied with Maxima to help shepherd her people to a safer corner of the galaxy after Imperiex took control of Almerac.

Massacre appeared to perish with Maxima when she heroicly tried to put her ship between the destructive beams of Brainiac 13's Warworld which would have resulted in the destruction of the entire universe (MOS #117).