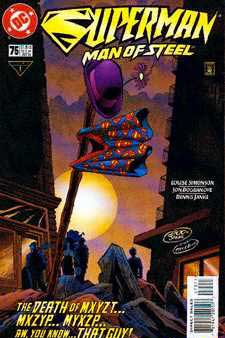 A Fifth Dimensional being that harasses Superman. Mr Mxyzptlk (pronounced mix-yez-pittle-ick) uses amazing scientific skills from the Fifth Dimension to do things on Earth that appear magical. He has appeared in Metropolis to challenge and harass Superman several times when an inter-dimensional interface is possible. He decides on a challenge and a condition for determining when he'll leave, and then Superman must try to succeed in out thinking him. When Mxyzptlk is out foxed and bound by his agreement to return to the 5th Dimension, everything that his magic changed is returned to normal.

Superman first met Mxyzptlk when he appeared in Metropolis as the charismatic Ben DeRoy. Mr Mxyzptlk once forced Superman and The Flash (Wally West) into a race that The Flash won. Mr Mxyzptlk encountered Lex Luthor and learned the concept of how to lie. Later, Mr Mxyzptlk supplied Luthor with red kryptonite which made Superman's powers disappear, but Luthor violated Mr Mxyzptlk's conditions and so Superman regained his powers. Mxyzptlk appeared in Metropolis and tried granting a wish to everybody in the city. He even tried, albeit unsuccessful at the time, to reunite Superman and Lois Lane.

He reappeared again briefly to "congratulate" Clark on his wedding day (Superman: The Wedding Album). He then showed up and, wanting to experience death, created a creature he referred to as "Bada-Bing-Bada-Boomsday" to fight against and imitate Superman's own deadly battle with Doomsday. He created the Doomsday clone a little too well, and had to "sacrifice" himself to stop it. Mxyzptlk's death didn't last longer than a minute (MOS #75).

There is a time when even a trickster is out-tricked. Mxyzptlk paid a visit to the insane clown prince of crime, The Joker, at his cell in Arkham Asylum. He toyed with the notion of setting the Joker free with 1% of his power and watch Superman and Batman dance to his tune. Smarter than he may have seemed to Mxyzptlk, the Joker tricked Mxyzptlk into revealing his imp name and gained power over him. He took 99% of Mxzyptlk's power and used it to proclaim himself Emperor of a world he reshaped in his image. Superman, finding the flaw in his twisted logic realized that to the Joker, his existence is nothing without Batman. He couldn't even erase his own memories of the Dark Knight and therefore his reality was thwarted and Mxyzptlk was able to reign his powers back in and return to the 5th Dimension (Nine issue saga beginning in SUP #160).

Recently Mxyzptlk has returned for a regular run-in every ninety days with Superman. Warning him of impending danger while helping him face Ruin, Mxy has breached the meta-fictional wall and slapped around Eddie Berganza AND Mike Carlin, along with giving Superman and Lois a glimpse at their potential child of the future, Lara Lane-Kent.

Only Mxy knows what this CRISIS he fears is coming will be. Undoubtedly, he will be playing a major part in the coming events.